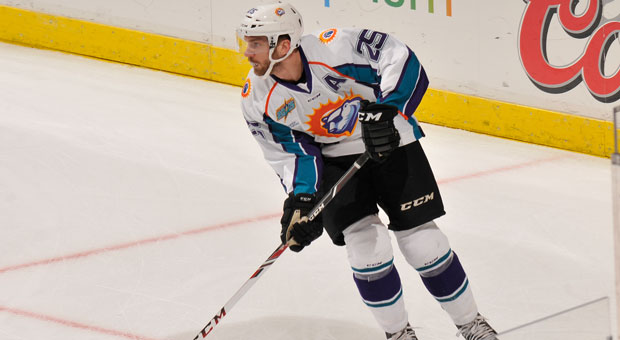 PEORIA, IL - The Peoria Rivermen added size and experience to their defensive unit Tuesday when they signed 6-foot-4, 225-pound defenseman Carl Nielsen to a professional tryout contract for their 2016 training camp. Nielsen becomes the fifth Rivermen defenseman signed to a training camp deal with Peoria expected to open their training camp in mid-October before they open the 2016-17 regular season October 21 at Carver Arena against Huntsville.

Nielsen, 28, comes to the Rivermen after he ended a preseason retirement last year to play 13 games for ECHL Orlando, where he was named a team captain. Nielsen was Orlando's Unsung Hero during the 2014-15 season, when he skated in 58 games, earning a spot in the ECHL's midseason All-Star game, finishing the year with a team-high 134 penalty minutes.

"We're very happy to get Carl into our camp," said Rivermen head coach Jean-Guy Trudel of the Lorain, Ohio native. ""He brings a lot of experience at higher levels, including 9 games in the American Hockey League, and we hope he can emerge as a leader on and off the ice for us."

Nielsen finished a four-year career at Michigan Tech in which he netted four goals and added 16 assists over 140 games, and played in two games at the end of the 2012-13 season for AHL Syracuse. He opened the 2013-14 season with Syracuse, but was loaned down to ECHL Florida to start the year, playing in seven games before returning to the Crunch to play seven regular season contests, after which he was loaned back to the Everblades for the remainder of the season.

All told as a professional, Nielsen has played in 124 games, scoring seven goals and adding 14 assists to 211 career penalty minutes. In the ECHL he teamed with former SPHL Rivermen winger Alexandre Carrier in Orlando in 2014-15, and in Florida he played with SPHL Rivermen winger Parker Stanfield as well as former AHL Rivermen Stefan Della Rovere and Bryce Lampman with ECHL Florida in 2013-14.

Nielsen joins rookie defensemen Luke Eibler, Kyllian Kirkwood, Frank MIsuraca and Nick Neville as blueliners currently signed to Peoria's training camp roster, with the Rivermen expected to add more defensemen before training camp opens in mid-October. The Rivermen begin their fourth SPHL season October 21 when they play host to the Huntsville Havoc at 7:05. Single-game tickets are currently on sale for all 28 of Peoria's regular-season home games through the Rivermen office or the Toyota Box Office at the Peoria Civic Center.


Group, Season, and single-game tickets for Peoria's 35th season of professional hockey are on sale now at the Rivermen office, located at 201 S.W. Jefferson Street, or over the phone at (309) 676-1040. For the latest Rivermen news and notes, follow online at www.rivermen.net or through Facebook (www.facebook.com/PeoriaRivermen) - Twitter (https://twitter.com/Peoria_Rivermen)