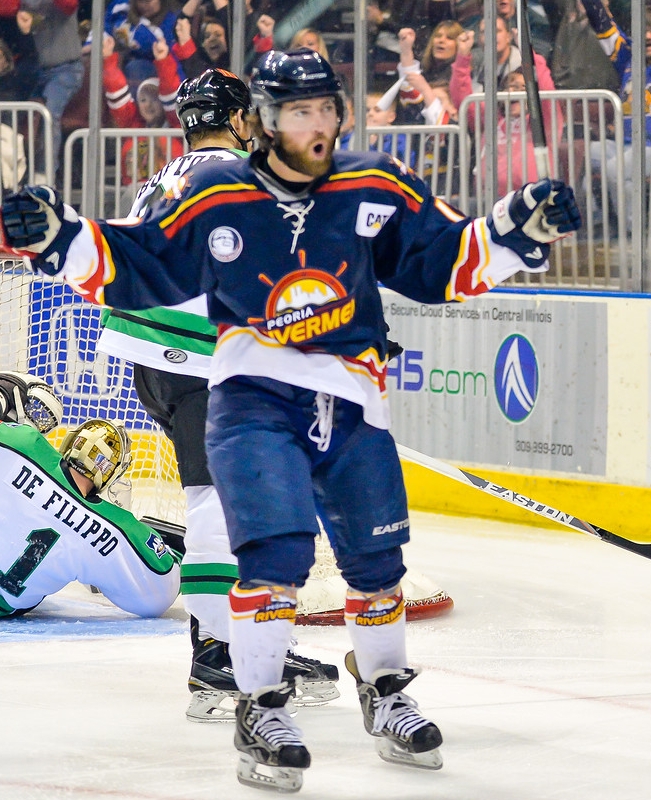 PEORIA, IL - The Peoria Rivermen on Wednesday announced the signing of center Josh Harris and defenseman Nick Neville to professional tryout contracts for Peoria's 2016 training camp. Harris and Neville join a list of nine other players who will be among those competing for a spot on Peoria's Opening Night roster October 21.

Harris, 27, spent most of last season recovering from a lower body injury he suffered during training camp, and returned for eight regular season contests, scoring a goal and two assists before going point-less in five postseason games. The 5-foot-10, 175-pound native of Torrance, California was Peoria's leading scorer during the 2014-15 season, skating in all 56 regular-season games and scoring 48 points on 23 goals and 25 assists. Harris spent the summer playing in the semi-pro Australian Ice Hockey League, scoring 14 goals and 21 assists in 21 games, helping the Newcastle North Stars to an AIHL championship, scoring the game-winning goal in the clinching game.

"We're excited to bring Harry back to Peoria this year," said Rivermen head coach Jean-Guy Trudel. "He worked very hard to get back from his injury last season, we weren't sure if he would make it back at all and he was back on the ice in games in late March. He's a sneaky guy with a quick release from anywhere, and we can't wait to have him for a full season again."

Neville, 23, comes to the Rivermen after playing parts of three seasons for the University of Denver. While there, Neville skated in 54 games, scoring two goals and four assists before leaving the school in January for personal reasons. Before attending the University of Denver, the Bloomfield Hills, MI native spent two years in the North American Hockey League with the Texas Tornado, where he was coached by former IHL Rivermen defenseman Tony Curtale.

With the Tornado, Neville played in 119 games over two seasons, tallying 12 goals and 52 assists while adding a +17 rating and 28 penalty minutes over two seasons. He helped the Tornado to a Robertson Cup championship in 2011-12 and was named NAHL All-South Division for the 2012-13 season.

The list of players signed by Peoria to training camp agreements is now at 11, including forwards Al Graves, Alec Hagaman, Jake Hauswith and Steve Morra, defensemen Luke Eibler, Kyllian Kirkwood, and Frank Misuraca, and goaltenders Troy Passingham and Tyler Green. The Rivermen also still hold the rights to defensemen Mark Corbett, Ben Oskroba, Dave Pszenyczny and Christian Weidauer along with wingers Dan Bremner and Chris Wilson on their protected list, although those players have yet to be signed to formal deals to attend Peoria's 2016 training camp. The Rivermen will open the season October 21 at Carver Arena against the Huntsville Havoc.

Group and Season tickets for Peoria's 35th season of professional hockey are on sale now at the Rivermen office, located at 201 S.W. Jefferson Street, or over the phone at (309) 676-1040. For the latest Rivermen news and notes, follow online at www.rivermen.net or through Facebook (www.facebook.com/PeoriaRivermen) - Twitter (https://twitter.com/Peoria_Rivermen