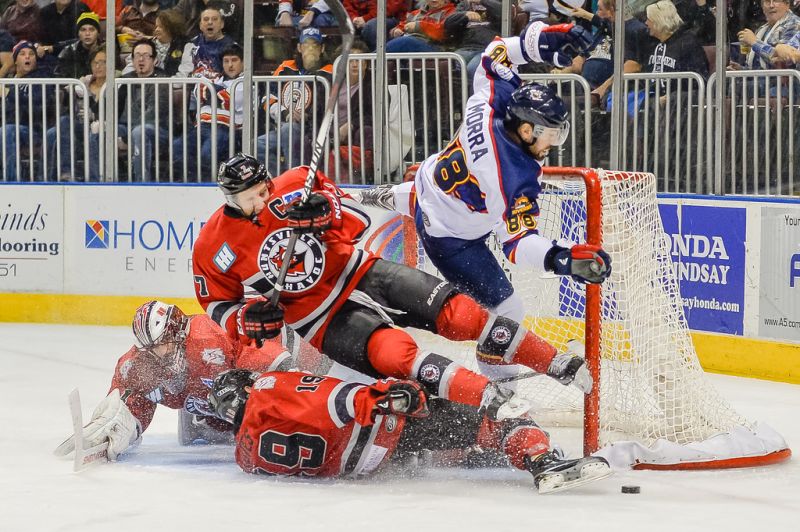 PEORIA, IL - The Peoria Rivermen on Tuesday announced the signing of high-scoring winger Steve Morra and rookie defenseman Luke Eibler to professional tryout contracts for the team's 2016 training camp, where the pair will vie for spots on Peoria's Opening Night roster October 21. Morra has spent parts of the past three seasons with the Rivermen, while Eibler wrapped up a four-year collegiate career last season before beginning his pro career by playing five games for the Berlin River Drivers of the Federal Hockey League.

"Stevie is a huge piece for us to bring back this year," said Rivermen head coach Jean-Guy Trudel. "He was really our most improved player over our first two years in this league, and last season after we talked him out of retirement he stepped right in and became a point-a-game guy for us during our 14-game winning streak and down the stretch. We're just thrilled to have him back in camp this year."

Morra, 27, was on Peoria's protected list after he recorded 34 points in just 37 games during the 2014-15 season before retiring during the offseason last summer and reportedly applying to become a Boston police officer. The 5-foot-11, 190 pound winger came out of retirement to rejoin the Rivermen for their December 18 game at Columbus, the game that would be the first of Peoria's SPHL record 14-game win streak.

The Bristol Township, Rhode Island native went on to record a point or more in eight straight contests from December 19 through January 15, including a goal and two assists December 19 at Columbus and two goals and an assist January 2 vs Huntsville. For his pro career, Morra has skated in 127 regular-season games, all for Peoria, and enters this year with exactly 100 career points on 38 goals and 62 assists. In the postseason, Morra has seven points in 14 games with Peoria, including two goals and two assists in last year's run to the President's Cup Finals.

Eibler, 26, comes to the Rivermen after he was a collegiate teammate of Morra's at Northeastern University in 2010-11 and 2011-12 before transferring to Northern Michigan University, where he played his final two college campaigns. For his college career, Eibler played in 131 games, scoring eight goals and 32 assists to go with 160 penalty minutes and a +17 rating. While at Northeastern, Eibler was +22 over two seasons, posting 21 points and 103 PIM in 71 games, and was also a teammate of 2015-16 Rivermen defenseman Ben Oskroba during the 2010-11 season.

"Luke is a big kid with a lot of potential to help our defensive unit," said Trudel of the 6-foot-2, 185-pounder. "He played with Stevie and (Ben Oskroba) at Northeastern, and everyone says he's a good teammate who will do what he has to, block shots, whatever it takes to help the team win."

The Rivermen will open their 2016 training camp during the second full week of October, and begin the season October 21 at home against the Huntsville Havoc. Single-game tickets are available now through the Rivermen office or by going to the Toyota Box Office at the Peoria Civic Center.

Group and Season tickets for Peoria's 35th season of professional hockey are on sale now at the Rivermen office, located at 201 S.W. Jefferson Street, or over the phone at (309) 676-1040. For the latest Rivermen news and notes, follow online at www.rivermen.net or through Facebook (www.facebook.com/PeoriaRivermen) - Twitter (https://twitter.com/Peoria_Rivermen)