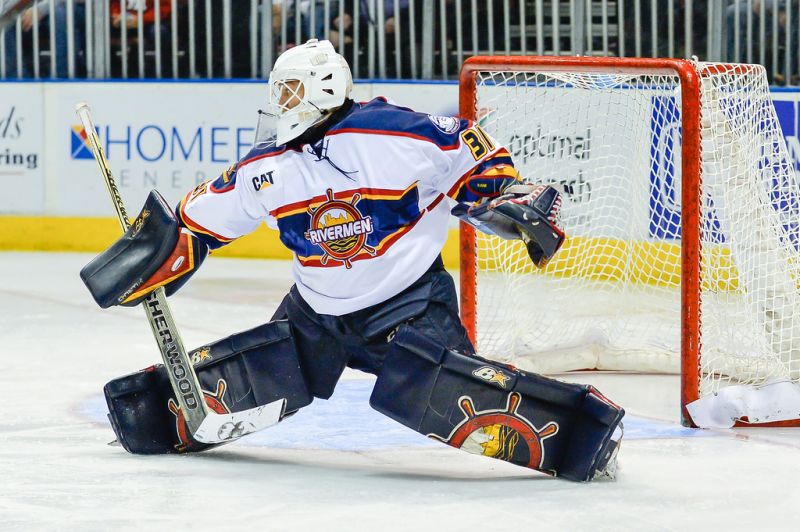 PEORIA, IL - After five SPHL seasons, Kyle Rank is calling it a career. The Rivermen netminder and two-time SPHL Goaltender of the Year announced his retirement on Sunday, concluding a career that included 148 games, 83 wins, and a league-record 13 shutouts.

Rank, 29, was acquired by the Rivermen in a trade with Fayetteville early in the 2013 season, reportedly in exchange for paying the FireAntz' hotel bill when they came to Peoria. Rank went on to lead the Rivemen to three straight playoff appearances, including a trip to the President's Cup Finals last season, when he recorded three shutouts en route to setting a new league record for longest postseason scoreless streak.

"This was a very difficult decision for me, but my health is a concern and I'm doing what is necessary," said Rank. "(With) some of the hits I've taken on the ice, it's a factor for me. These are not issues exclusive to the SPHL, these kind of hits can happen in any league."

Rank suffered several concussions in his career, the most severe of which came this past December at Columbus, when Cottonmouths forward Craig Simchuk blindsided Rank, driving his head into the goalpost, leaving Rank unconscious on the ice for several minutes and out of action for nearly a month. Simchuk was issued a 28-game suspension for the hit, the longest in league history.

"You can't control what a selfish player is going to do, one guy, the impact he might have on you and on the league," added Rank. "There is an honor code in professional hockey, but you have to rely on everyone following it."

Rank was on Peoria's list of protected players this offseason, so the team reserves the rights to his services if he decides to return to the SPHL.

Rank is currently living in Pensacola, pursuing a business career in training and physical therapy. He was recently selected from over one hundred applicants for one of four internships with Exos, a sports performance company.

"They train athletes, and Pensacola has a has a big military presence, of course, so we also work with members of the military, providing physical therapy to assist them toward returning to duty," said Rank. "Training and improving athletes is a passion for me, and this is a real chance to establish myself in it."

Rank concludes his career with numerous league records to his name, including most shutpouts in a single season (8 in 2013-14), postseason shutouts in a career (5), a single postseason (3 in 2015-16), and longest postseason scoreless streak (159:28). He also finishes tied with longtime Columbus backstop Andrew Loewen for the most regular season shutouts (13). Rank won back-to-back SPHL Sher-Wood Goaltender of the year awards in the 2013-14 and 14-15 seasons, finishing second in the voting to league MVP Garrett Bartus of Macon in 2015-16.

After the Rivermen acquired Rank in 2013, he went on to finish that season 14-7-3 with a 1.79 GAA and .942 save percentage over 25 outings for Peoria. Rank's 85 career wins land him fifth in league history, and his 10th shutout in a Rivermen uniform this January at Macon set the Peoria franchise record, surpassing NHLers Ben Bishop and Jake Allen of the AHL Rivermen.

"These are gut-wrenching decisions for a player, and Kyle has had a long, terrific career and it's not easy for him to leave it behind," said Rivermen head coach Jean-Guy Trudel. "He has done so much for the Rivermen, been the heart and soul of our team and a huge presence in the community. We can't thank him enough for all he's done for us. I could always relax when he was in our net, we counted on him and he delivered. He has a great opportunity and we hope he succeeds. We will miss him."

"The only thing I couldn't get done in my career was win a championship," said Rank. "I will always feel as if it was a personal defeat. That will be my only regret. I appreciate everything the Peoria community, the fans, and the organization has done for me. If not for them, my career would never have been of a significant note."