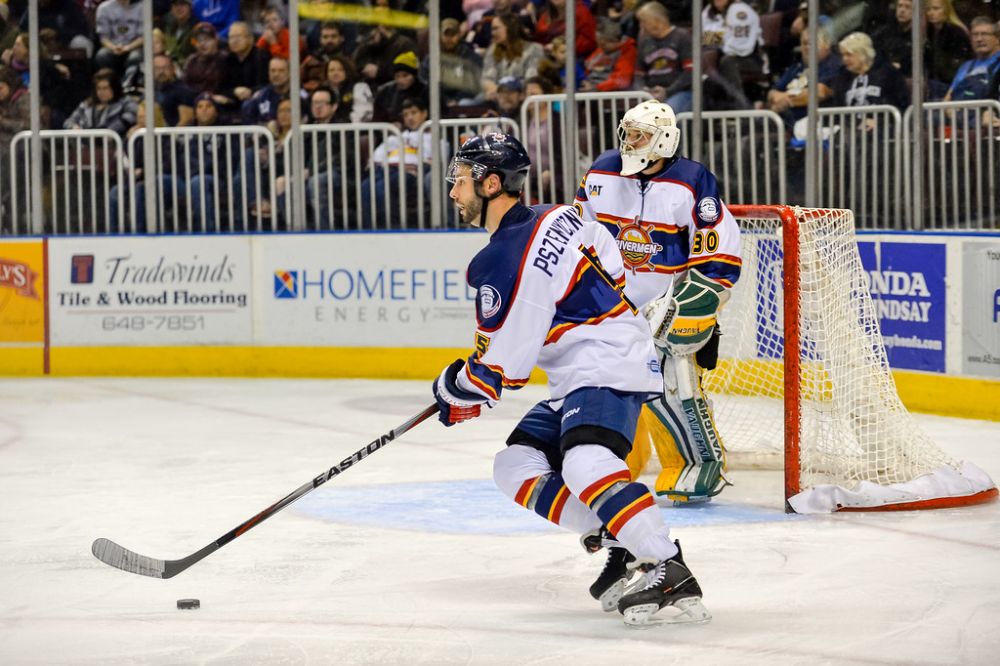 PEORIA, IL – The Peoria Rivermen on Monday announced the signing of veteran defenseman Dave Pszenyczny to a full contract after Pszenyczny’s SPHL-imposed eight-game suspension expired over the weekend. In additional roster moves, the Rivermen sent rookie blueliner Frank Misuraca to Evansville for future considerations and released goaltender Troy Davenport, with Peoria expected to add another goaltender before the team leaves for Knoxville to begin a three-game road trip this Friday.

Pszenyczny joined the Rivermen in late December last season, making his SPHL debut in the team’s January 1 win over Huntsville. The Sterling Heights, MI native skated in 36 regular-season contests for the Rivermen last year, posting 11 goals and assisting on 16 others, racking up 74 PIM and a +16 rating. In the postseason Pszenyczny’s steady play continued, logging two goals and three assists in eight postseason games as Peoria made a run to the President’s Cup Finals.

“Dave is a huge piece for us to get back in our defensive group,” said Rivermen head coach Jean-Guy Trudel. “He’s a good character guy in the locker room and a great leader on the ice. We couldn’t be happier to have him back on our roster.”

In an additional move Monday afternoon, the Rivermen traded rookie defenseman Frank Misuraca to the Evansville Thunderbolts in exchange for future considerations. Misuraca finished a four-year collegiate career at the University of Alabama-Huntsville last season and skated in five games for the Rivermen, scoring his first pro goal at Knoxville in early April. This season, Misuraca played in three games for the Rivermen and five more for the ECHL’s Cincinnati Cyclones, recording two penalty minutes and a combined -1 rating between Peoria and Cincinnati.

The Rivermen also announced Monday that the team has waived goaltender Troy Davenport. The 31-year-old played in one game for Peoria Novemer 5 against Pensacola, stopping 21 of 23 shots he faced in net and earning the overtime win between the pipes. The game against the Ice Flyers served as Davenport’s North American pro debut after he spent parts of six seasons playing professionally in Sweden and Italy, following a college career at Cornell and a three-year USHL stint from 2003-06. The Rivermen are expected to make a correlating move later this week to add a goaltender before the team leaves for a three-game, three-day road trip to Knoxville, Huntsville, and Mississippi Friday, Saturday, and Sunday, respectively.

The Rivermen return to action in Knoxville this Friday night when they take on the Ice Bears to open a three-day road swing with a 6:30 puck drop from Tennessee. Peoria will play 3 PM games at Huntsville Saturday and Mississippi Sunday before returning home for a pair with the expansion Evansville Thunderbolts November 25 & 26,with Black Friday ticket specials available for Friday’s game and Saturday’s tilt including Peoria’s annual Teddy Bear Toss and Salvation Army Coats for Kids drive, as well as an appearance by Eureka native and Chicago Cubs World Series MVP Ben Zobrist. More information about all upcoming promotions and ticket specials are available by calling the Rivermen office at (309)-676-1040.