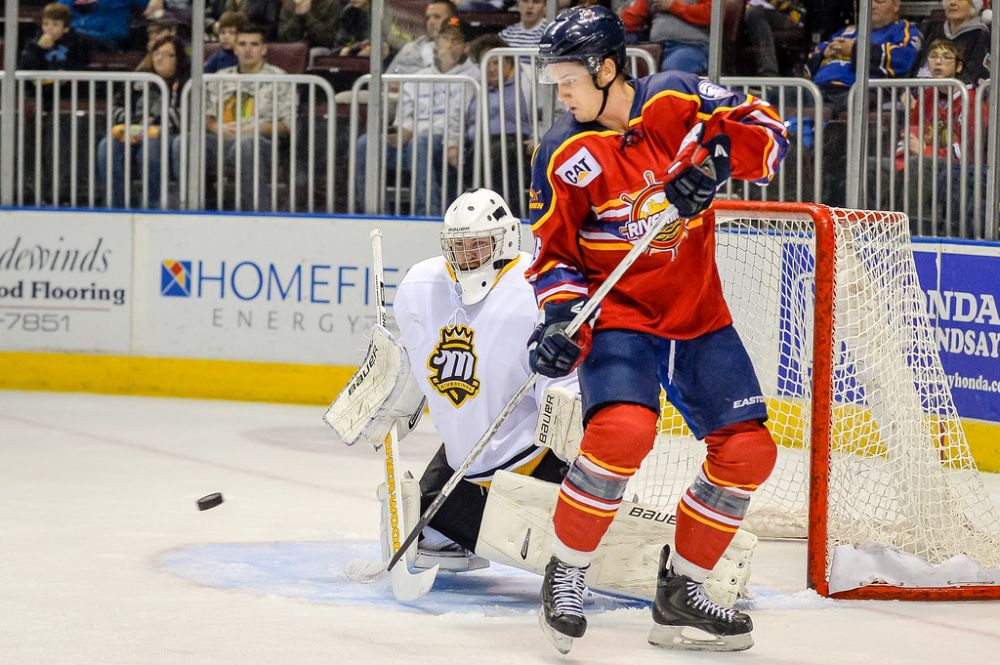 Stuart returns to the Rivermen after he lead Peoria in scoring last season, notching 21 goals and 23 assists in 54 regular season games, adding a team-high nine points on three goals and six assists in eight postseason contests. The veteran center/winger was signed by Knoxville this offseason, skating in six games, scoring three goals and assisting on five others before the Ice Bears traded him yesterday to Fayetteville in exchange for winger Joseph Manno. In his now six-year SPHL career with the defunct Mississippi Surge (2011-13), dormant Louisiana IceGators (2013-15), Rivermen (2015-16) and Ice Bears (2016), Stuart has logged 102 goals and 132 assists over 277 regular-season games, adding three goals and eight assists in 19 playoff games.

In exchange for Stuart, the Rivermen sent center Jake Hauswirth and defenseman Mark Corbett to the Fayetteville FireAntz. Peoria signed Hauswirth this offseason after the former IceGator became available when the franchise suspended operations for the 2016-17 season. This year with the Rivermen, Hauswirth scored four goals and assisted on six others in 11 games, giving him 43 goals and 59 assists in 109 career regular-season SPHL games.

In addition to Hauswirth, the Rivermen also sent defenseman Mark Corbett to the FireAntz. Corbett had skated in 72 regular-season SPHL games, 60 with Peoria, scoring four goals and assisting on 16 others. Corbett joined the Rivemen last season and logged an assist in eight postseason games, helping the Rivermen to an SPHL President’s Cup finals berth.

In addition to the swap with Fayetteville, the Rivermen also announced Monday that the team has re-signed captain Dan Bremner, re-naming him team captain. The Sarnia, Ontario native saw action in seven games this season, assisting on three goals and racking up 10 penalty minutes before being released November 11. The Rivermen captain has played in 106 career regular-season games with Peoria, scoring 17 goals and 35 assists, adding a +16 rating and 326 PIM. For his five-year SPHL career with Knoxville (2011-13), Columbus (2013-14) and Peoria (2014-present) Bremner has played in 257 regular-season games, scoring 43 goals and assisting on 70 others, posting 640 career PIM and a +11 rating.

“It’s all about the grit factor,” said Rivermen head coach Jean-Guy Trudel of Monday’s moves. “Stuart became available and we felt he was a must-have player, a guy we’ve seen compete here and demand more from his teammates around him. He is a point-per-game player and we had to give up a great player in Hauswirth to make that deal happen.”

“The trade also allowed us to bring back Dan Bremner, which supplies us with some of the grit we needed. With Bremner and Alec Hagaman, we have two top penalty-kill guys, something we lacked Sunday at Mississippi (when the team gave up two power play goals in a 4-3 overtime loss.).”

In addition to the trade with Fayetteville and re-signing Bremner, the Rivermen made a number of other roster moves on Monday, acquiring defenseman Rich Ledy from Knoxville for future considerations, placing blueliner Christian Weidauer on 14-day IR retroactive to November 13, and waiving Russian winger Dmitri Ognev.

Ledy comes to Peoria after the 6-foot-4, 205 pounder played eight games for the Ice Bears this season, posting two assists. Ledy began his pro career in 2014-15 with one game in FHL Steel City after he played four collegiate seasons in the Division III ranks with New England College, Becker College, and Worcester State University. Ledy earned a call-up from the FHL ranks to Knoxville last season, playing in 21 games, recording six assists before playing in all three of Knoxville’s first-round playoff games against Fayetteville.

Weidauer heads to the Injured Reserve after an upper-body injury he suffered in Peoria’s November 12 game against Huntsville. Weidauer, 22, did not see action in any of Peoria’s three road games this past weekend. In eight games this year, the Keswick, Ontario native posted a goal and an assist, and in 30 games for the Rivermen last year he logged seven assists. Weidauer also played 22 games in ECHL Brampton last season, assisting on a pair of goals for the Beast before returning to Peoria for the Rivermen’s playoff run, logging one assist in eight postseason games.

Ognev, meanwhile, scored two goals in eight games for Peoria, sitting as a healthy scratch in all three games over the weekend. The Russian import scored a game-tying goal in Peoria’s eventual overtime loss at Macon October 29, and scored the overtime winner against Pensacola November 5.

The Rivermen return to action this Friday and Saturday when they host the expansion Evansville Thunderbolts at Carver Arena. Friday’s game is Salvation Army Coats for Kids night, with fans invited to bring a new or gently used coat to donate to the Salvation Army and receive special offer from the Rivermen. Fans can also receive Pilot House tickets to Friday’s game for $5 and premium tickets for $10 through the team offices from 10 AM to 3 PM on Black Friday.

Saturday is Ben Zobrist day with the Rivermen, with the Chicago Cubs World Series MVP and Eureka native on hand to drop the first puck of the game and be honored on the ice for his accomplishments on and off the field. Saturday is also Peoria’s annual Teddy Bear Toss night, with the Rivermen inviting fans to bring Teddy Bears and other stuffed animals to toss on the ice after the first Rivermen goal, with all toys collected to be donated to the Salvation Army of Peoria.