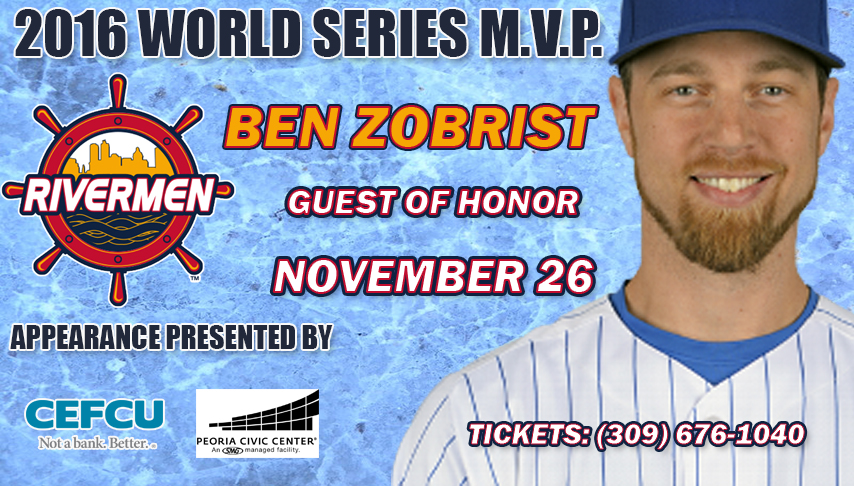 PEORIA, IL – The Peoria Rivermen are excited to announce that Eureka native Ben Zobrist, who is scheduled to appear as the Guest of Honor at Peoria’s November 26 game against Evansville courtesy of CEFCU and the Peoria Civic Center, has been named the Most Valuable Player of the 2016 World Series. Zobrist helped the Chicago Cubs to the team’s first World Series title in 108 years to become a 2-time Champion himself, after he won the World Series with the Kansas City Royals last season.

Zobrist will be on hand for a special pre-game ceremony, as the Rivermen and Central Illinois acknowledge his career and accomplishments on and off the playing field. Zobrist will be dropping the first puck of the game and receiving a special proclamation from the City of Peoria. Throughout the night, the Rivermen will honor Chicago’s historic 2016 season by giving away Cubs memorabilia and prizes to lucky fans in randomly selected seats.

“Ben epitomizes what it means to be a professional athlete during this day and age,” said Rivermen owner Bart Rogers. “His accomplishments on and off the field help him serve as a positive role model for young athletes, and his work ethic embodies the spirit of our community and values here in Central Illinois. We are elated to have Ben in attendance and can’t wait for November 26.”

Fans are encouraged to wear their “Cubbie Blue” and pack Carver Arena to honor a native son of Central Illinois. Additionally, one dollar of every paid ticket will be donated to Ben’s charity of choice, Patriot Forward.

Tickets to the game are available by calling the Peoria Civic Center or online at ticketmaster.com. For more information, fans are encouraged to call the Rivermen at (309)-676-1040 or log on to rivermen.net.