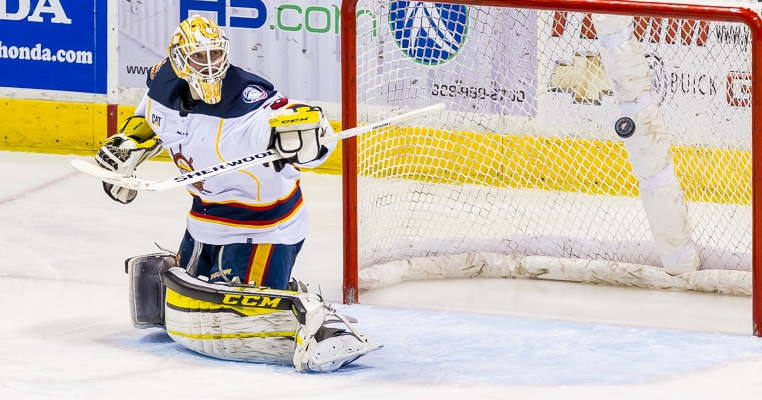 PEORIA, IL – The Peoria Rivermen announced Tuesday that goaltender Tyler Parks and forward Michael Colantone have been loaned to ECHL Missouri and Colorado, respectively, before the Rivermen host a pair of games with the Mississippi RiverKings this Friday and Saturday. Parks signed with the Mavericks during last season’s ECHL playoffs, but did not enter a game for the Mavericks, while Colantone spent last season with ECHL Indy and played one game with the Fuel on a loan earlier this season before returning to the Rivermen before the team’s last game December 23 at Evansville.

Parks joined the Rivermen November 15 after he was released by the Evansville Thunderbolts. Since joining the Rivermen, Parks has gone 4-1-3 with one shutout in eight appearances seven starts, with a 1.97 goals-against average and a .929 save percentage, after he logged a 3.47 GAA and a .896 saves rate over four games with Evansville in which he went 0-3-1.

Colantone signed with the Rivermen November 28, skating in five games with a goal and three assists before he was loaned to Indy December 17, skating in one game with the Fuel before returning to Peoria. After rejoining the Rivermen, Colantone logged an assist on Peoria’s lone goal in a 2-1 overtime loss at Evansville last Friday. Last season with Indy, Colantone played in 40 games, scoring nine goals and assisting on eight others.

The Rivermen return to action this Friday and Saturday at Carver Arena against the Mississippi RiverKings, with both contests scheduled to start at 7:05. Friday’s game will be Chicago Blackhawks night, with Blackhawks mascot Tommy Hawk in attendance. The Rivermen will also give out stocking caps to the first 1,000 fans in attendance, courtesy of Unity Point Health Peoria. Saturday the Rivermen are celebrating New Year’s Eve by offering two tickets for $20.17, and the night will feature Peoria’s first-ever indoor fireworks show, presented by the International Brotherhood of Electrical Workers Local 34. Tickets for both games can be purchased through the Toyota Box Office at the Peoria Civic Center, or by calling the Rivermen at (309)-676-1040.