Rivermen Get Keller Back From ECHL Indy, Loan Riley to Adirondack 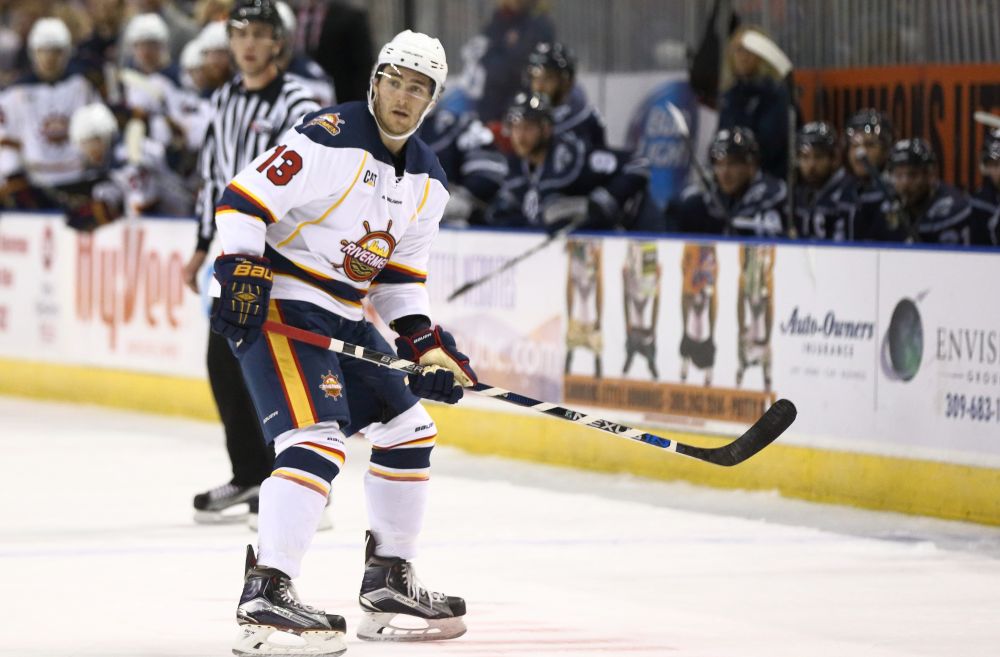 Rivermen Loan Riley to ECHL Adirondack, Get Keller Back From Indy

PEORIA, IL – The Peoria Rivermen on Tuesday announced a series of roster moves, loaning defenseman Conor Riley to ECHL Adirondack, and returning center/winger Ryan Keller from his loan to ECHL Indy. Additionally, the team has placed defenseman Brandon Greenside on the 21-day injured reserve. Finally, the Southern Professional Hockey League announced Tuesday that the suspension of winger Adam Stuart, who missed Saturday’s clash in Columbus pending further review of an unpenalized hit in last Friday’s contest, would not last more than the one game Stuart has already served.

Keller returns to the Rivermen from the ECHL Indy Fuel, where he skated in five games without registering a point or a penalty, logging a -1 rating. In seven games with the Rivermen this November, Keller had two goals and two assists, adding a +4 rating.

Riley returns to the Adirondack Thunder, where he played two games late last season following his senior campaign at the University of Maine. Riley had recorded two assists in eight games since joining the Rivermen just over three weeks ago.

Greenside was signed by the Rivermen last week, pending suspension after he was involved in a postgame altercation with officials after Game 3 of last season’s President’s Cup Finals. Greenside was issued a four game suspension, with the first three of those games served during Peoria’s road trip last weekend. Greenside would have been eligible to return from his suspension after the Rivermen game against Knoxville this Friday, but will now be able to return after Peoria’s December 23 contest at Evansville. The London, Ontario native posted a league-best +31 rating and scored six goals and 31 assists in 56 games, leading all SPHL defensemen in assists and points en route to SPHL Defenseman of the Year and First-Team All-SPHL Honors.

Stuart, meanwhile, is eligible to return to the Peoria lineup for the team’s game this Friday after the SPHL limited his suspension to one game. The Calgary, Alberta native was suspended indefinitely by the league after Peoria’s December 2 game at Columbus for an unpenalized check from behind. The veteran winger missed Peoria’s rematch at Columbus December 3. He was Peoria’s leading scorer last season with 21 goals and 23 assists in 54 games, and in 10 games this season between Knoxville and Peoria, the 27-year-old has tallied three goals and assisted on nine others.

The Rivermen return to action at home this Friday when they take on the Knoxville Ice Bears at 7:05. The game will be Peoria’s Flip Calendar Giveaway Night, with Rivermen 2017 Flip Calendars given to the first 3,000 fans in attendance. It will also be Zach McAllister Night with the Rivermen, with the Cleveland Indians right-hander and Chillicothe, IL native on hand to sign autgraphs on the concourse from 6-8 PM. The Rivermen will also be honoring the Illinois State Champion Peoria High School Lions football team, and will also have superheroes appearing on the Carver Arena concourse including Batman, Wonder Woman, Flash, Bat Girl, Green Lantern and Green Arrow. Tickets are available for the game through the Toyota Box Office at the Peoria Civic Center, or by contacting the Rivermen office at (309) 676-1040.