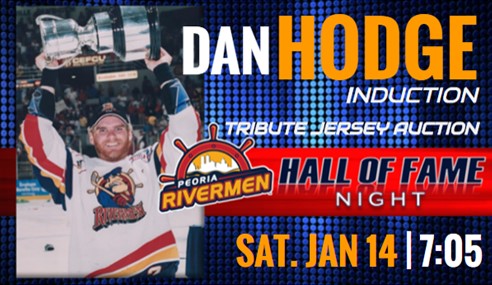 Peoria, IL – The Peoria Rivermen have announced Monday that the team will be reducing the price of tickets in section nine of the lower bowl at Carver Arena to $9 for the rest of the season. The addition comes with the Rivermen approaching the midway point of their season, and ahead of Peoria’s first three-game home weekend.

Friday is scheduled to be Peoria’s Youth Jersey Giveaway Night, with youth Rivermen jerseys given to the first 750 kids 12 & under courtesy of Pekin Insurance.

Saturday the Rivermen will hold a special ceremony as they induct former ECHL Rivermen defenseman Dan Hodge into the Rivermen Hall of Fame. Peoria will be wearing specialty jerseys for Saturday’s game honoring Hodge and the 99-00 Rivermen Kelly Cup championship team that will be auctioned off after the completion of the contest.

After Saturday’s festivities, Peoria will host the season’s first PNC Family Fun Sunday at 3:05 against Evansville, with pregame inflatables, face painting, and balloon animals in the Great Hall, as well as $1 upper bowl tickets for kids 12 and under, and $1 Raber hot dogs throughout the afternoon.