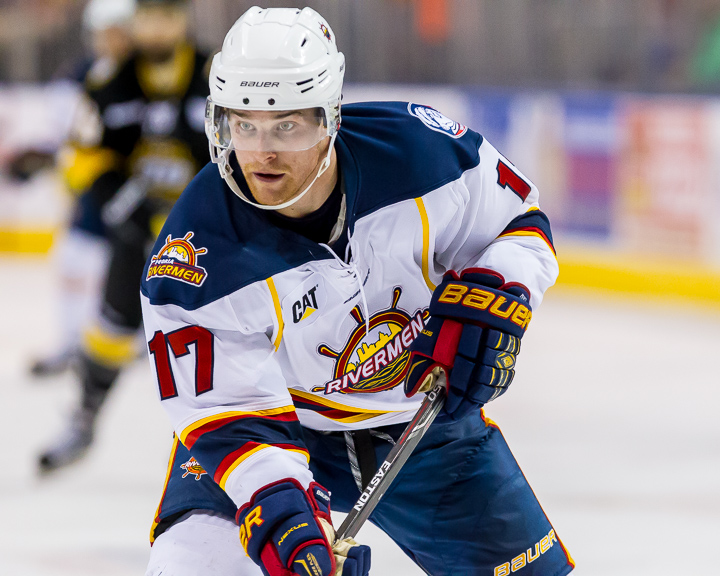 Peoria, IL – The Peoria Rivermen announced today that the team has signed winger Alec Hagaman to a training camp deal for the team’s upcoming camp, set to take place prior to October’s season opener. The Peoria native returns to the Rivermen for his fourth full season in Peoria after he set career highs with 25 assists and 37 points and led Peoria with 108 penalty minutes last season.

Hagaman began his pro career with the Rivermen in the 2014-15 season, when he tallied 13 goals and 13 assists in 51 games, following the conclusion of a four-year collegiate stint at the University of Wisconsin – River Falls. In 150 career SPHL games, the Dunlap, IL product has notched 39 goals and 50 assists, adding a +23 career rating and 336 penalty minutes. Last postseason, the 27-year-old added three goals and six assists in 7 contests, helping the Rivermen to the President’s Cup Finals for the second straight year.

“Hags is a talented player and we’re pumped to have him back in the fold this year,” said Rivermen head coach Jean-Guy Trudel. “He came in his rookie year as our 10th forward, and he’s worked hard to keep getting better every year. Last season he continued being one of our top forwards on the penalty kill unit, and as the season progressed he got involved and had success on the power play as well. We can’t wait to see what the 2017-18 season brings for him.”