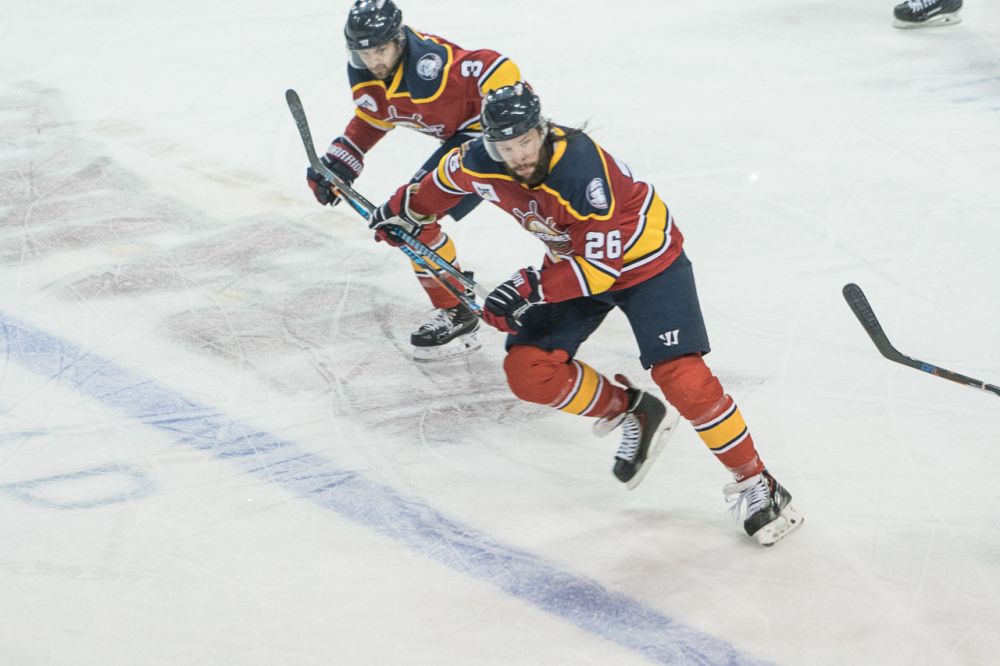 Peoria, IL – The Peoria Rivermen have announced today that the team has re-added defenseman Geoff Fortman to the roster, waived winger Tommy Tsicos, and moved center/winger Will Smith from the 21-day Injured Reserve to Season-Ending IR with a lower body injury he suffered in a March 16 game at Pensacola. Fortman returns to the Rivermen roster after skating in 57 ECHL games for Cincinnati and Rapid City.

Fortman first joined the Rivermen prior to the team’s season-opener at Evansville, recording a goal and an assist in his second SPHL game October 24 against the Thunderbolts. Fortman was loaned to the Cincinnati Cyclones October 25, and skated in 14 games, scoring a goal, before he was waived by the Cyclones and claimed by the Rapid City Rush December 7. In 43 games for the Rush this season, Fortman posted a goal and four assists. As a junior player, Fortman skated for the NAHL Amarillo Bulls, who are owned and operated by current Rivermen ownership group Consolidated Sports Holdings International, LLC.

“Getting Geoff back here is a huge piece to our postseason puzzle,” said Rivermen head coach Jean-Guy Trudel. “He only played a couple of games for us in October before he got called up, but he’s a solid defenseman who can move the puck and has a good shot from the point, getting him back into the mix will be big for us as we build our playoff roster over these last two weeks of the season.”

Tsicos leaves the Rivermen after he played in seven games for Peoria, recording a single assist and a +2 rating along with 16 penalty minutes. Tsicos also skated in 17 SPHL games for Huntsville this season, where he registered two goals and assisted on another, notching 23 PIM and a -1 rating.

Smith’s season with the Rivermen concludes after he suffered a lower body injury in Pensacola March 16. In 39 games this year for Peoria, the first-year pro tallied 15 goals and 18 assists, and he was a +13 while adding 31 penalty minutes.

“Losing Smitty is tough for our team,” said Trudel. “He was a sparkplug on our offense this season, he created scoring opportunities with his speed and shiftiness, and his versatility to play wing or center while being responsible in his own end was a big shot in the arm that we’re going to have to try and replace before we start the postseason.”

The Rivermen return to action this Friday and Saturday in Roanoke before concluding the regular season April 6 & 7 at Carver Arena against the Rail Yard Dawgs. April 6 is Peoria’s Call Julie 8-1-1 night, with $8.11 upper bowl tickets available through the Rivermen office, while Saturday is Peoria’s CEFCU Fan Fest Night, with a team photo given out to the first 3,000 fans, and a meet and greet with the entire team on the Carver Arena concourse following the game. Peoria is then hosting a watch party in the Coca Cola Lobby behind section 1 in Carver Arena for the league’s first-ever Playoff Selection show, where each of the top three teams in the league standings will select their first-round playoff opponent. More information on all Peoria’s upcoming games and events, as well as playoff tickets, is available by calling the Rivermen office at (309)-676-1040.