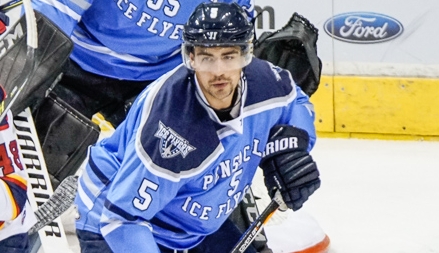 Peoria, IL – The Peoria Rivermen announced this morning that the team has acquired defenseman Brandon Parrone from the Macon Mayhem in exchange for future considerations. Additionally, the team has signed blueliners Jake Hamilton and Austin Frank to full contracts ahead of Friday night’s road game against the Quad City Storm.

Parrone, 26, joins the Rivermen after skating in one of Macon’s first two games this season, his second as a professional. The Peoria, Arizona native started his pro career last season with Pensacola, logging a goal, six assists, and a +17 rating in 38 games for the Ice Flyers before he was waived in early March. After being claimed from waivers by the Mayhem, Parrone skated in 10 regular-season games, adding an assist in five postseason contests.

“Parrone is a big defender who kills penalties and is reliable in his own zone,” said Rivermen head coach Jean-Guy Trudel. “He’s a guy with a high hockey IQ who will really help our defense with all the call-ups and injuries we’ve had so far this year.”

Hamilton rejoins the Rivermen after spending time with Peoria in training camp this year, skating in the Rivermen’s preseason contest against Quad City October 13. The O’Fallon, IL native will begin his pro career with the Rivermen after spending parts of the last two seasons with the University of Wisconsin – Superior. Frank, meanwhile, comes to Peoria after a four-year collegiate stint at Lawrence University, where he was named team captain last year and was a teammate of Rivermen winger and fellow rookie Lane King.

The Rivermen are scheduled to return to action Friday night at the TaxSlayer Center in Moline, IL against the Quad City Storm, with puck drop set for 7:10 PM. Information about Peoria’s regular-season home opener against the Storm November 2, as well as a full Rivermen schedule, can be found online at rivermen.net or by calling the Rivermen office at (309)-676-1040.