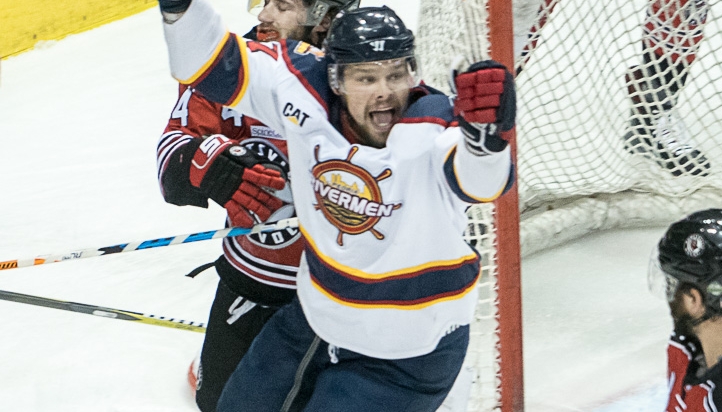 Peoria, IL – The Peoria Rivermen announced today that winger Joe Kalisz has been loaned to the ECHL’s Maine Mariners. Kalisz becomes the sixth Rivermen skater to be loaned to an ECHL club this season.

Kalisz, 27, earns his first career ECHL trip after posting six goals and nine assists in 10 games this season, adding a +12 plus/minus rating and two game-winning goals, helping the Rivermen to a historic 9-0-2 start to the 2018-19 season. His six goals, 15 points, 2 game-winning goals, and +12 rating are all tied for team leads, and his current eight-game point-scoring streak is tied with teammate Alec Hagaman for the longest such active streak in the SPHL.

Last season, the Davison, MI native joined Peoria via January 24 trade with Fayetteville, and finished the regular season with 10 goals and 7 assists in 27 outings, adding five points in six playoff appearances. Prior to joining the Rivermen, the 2011-12 NAHL MVP posted 24 goals and 20 assists in 75 combined regular-season and postseason games for SPHL Fayetteville over parts of two seasons.

Kalisz joins forwards Justin Greenberg (Atlanta) and Joseph Widmar (Fort Wayne) as well as defensemen Jake Flegel (Atlanta), Chris Rygus (Fort Wayne), and Cody Smith (Newfoundland) as the sixth Rivermen skater called up this season, totaling nearly half of all non-goaltender ECHL loans in the SPHL this season. In terms of games missed due to ECHL loan, Rivermen skaters have missed 37 combined games, while the seven position players called up from other SPHL teams have missed a combined 29 contests.

The Rivermen are scheduled to return to action this Friday and Saturday night in Fayetteville, NC against the Marksmen before returning to Carver Arena for home games December 8 & 9. December 8 will be Peoria’s Jimmy Buffett Night presented by Easley Winery and Reggae Wines, with special jerseys worn by the Rivermen and auctioned off postgame. Peoria will also hold their annual Teddy Bear Toss December 8, with all stuffed animals thrown on the ice after the first Rivermen goal donated to local charities. Tickets to all of Peoria’s remaining 2018-19 home games are available by calling the team at (309)-676-1040.