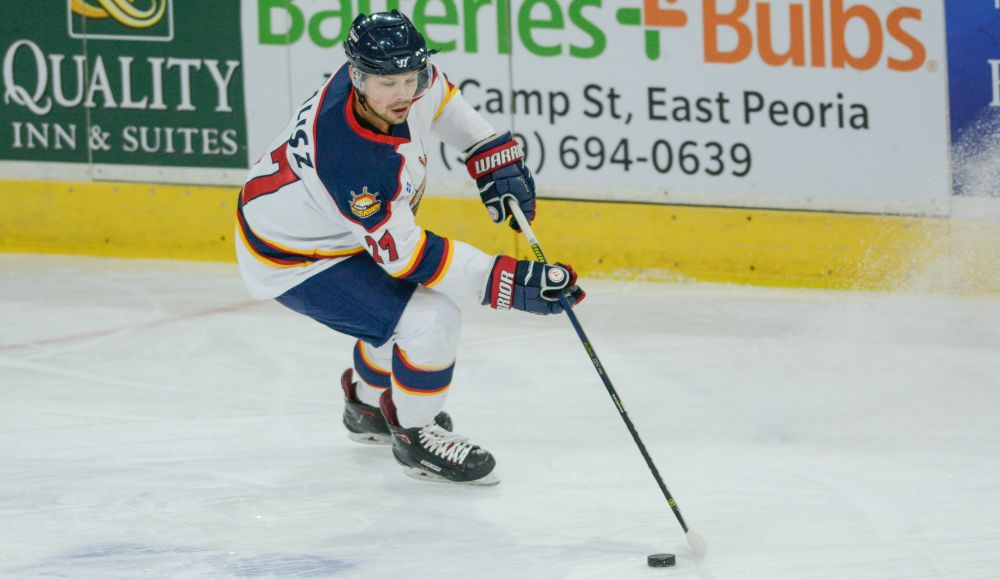 Pair return to Peoria before weekend games against Quad City

Peoria, IL – The Peoria Rivermen announced today that winger Joe Kalisz and goaltender Storm Phaneuf have returned from their loans to ECHL Maine and Kalamazoo, respectively. Kalisz returns to the Rivermen after recording four assists in his 15-game stint with the Mariners, while Phaneuf saw one game during his time in the ECHL, split between Brampton and Kalamazoo.

Kalisz, 27, earned his first career ECHL call-up this season after notching six goals and nine assists in his first 11 games, and was leading the Rivermen in scoring at the time of his loan to Maine in late November. Last season, the Davison, Michigan native joined Peoria via trade and recorded 17 points in 27 regular-season outings, adding three goals and two assists in Peoria’s three-game President’s Cup Finals effort against the Huntsville Havoc.

“Having Joe back in the lineup will be a big boost for this team moving forward,” said Rivermen head coach Jean-Guy Trudel. “We’re obviously excited to see him earn a chance to prove himself at the next level, but he’s a guy we’ve really missed having here in Peoria, both his talent on the ice and his attitude in the locker room.”

Phaneuf returns to Peoria after loans to ECHL Brampton and Kalamazoo, seeing action in one game with the Wings, making 18 saves on 26 shots, taking the loss January 5 at Cincinnati. This season with the Rivermen, Phaneuf is 6-0-1with a 1.99 goals-against average and a .892 save percentage.

The Rivermen return to action at Carver Arena this Friday and Saturday night against the Quad City Storm, with both games scheduled to begin at 7:15. Friday’s game is Country Music night, with a postgame concert performed by the Joe Stamm Band. Friday is also Chicago Blackhawks night at Carver Arena, with an appearance by Blackhawks mascot Tommy Hawk. Saturday Peoria will host its annual Hall of Fame night presented by Samaritan Ministries, with former Rivermen winger Butch Kaebel and longtime broadcaster Norm Ulrich set to be inducted into the Rivermen Hall of Fame. The team will also wear special throwback-style jerseys and auction off the game-worn sweaters afterward. Saturday is also Peoria’s Faith & Family night, with a postgame concert I Am They.