Rivermen Announce Bevy of Transactions Prior to Weekend 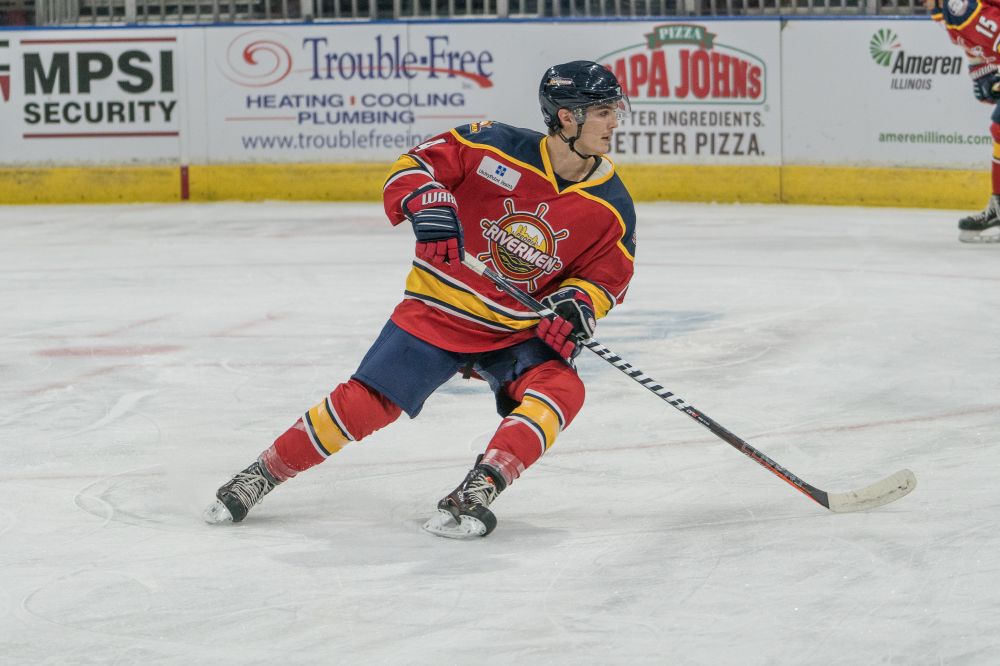 Rivermen Announce Bevy of Transactions Prior to Weekend

Peoria, IL – The Peoria Rivermen announced this week that the team has acquired winger Pijus Rulevicius from the Evansville Thunderbolts in exchange for defenseman Austin Frank and the SPHL rights to D-man Brandon Rumble. Additionally, the Rivermen have acquired goaltender Ryan Mulder from the Quad City Storm in exchange for future considerations, signed defenseman Aaron Atwell and winger Stephen Gaul from FHL Danville, and loaned center Will Smith to ECHL Adirondack.

Smith, now in his second pro season, departs the Rivermen after logging eight goals and 12 assists in 23 outings. Last season, Smith began his pro career with ECHL Indy, skating in five contests before joining the Rivermen, with whom he posted 15 goals and 18 helpers in 39 games before suffering a season-ending lower body injury in a mid-March game at Pensacola. Smith’s loan to the Thunder marks the 13th time this season a Rivermen player has been called up, and the East Longmeadow, MA native becomes the 11th individual Rivermen player to spend time in the ECHL this season.

Rulevicius comes to Peoria after playing in 23 games this season for Evansville, notching five goals, five assists, and 54 penalty minutes. Last season with the Mississippi RiverKings, Rulevicius netted four goals and added 10 assists and 63 PIM over the course of 45 games, adding appearances in all three RiverKings playoff contests.

Frank skated in eight games for the Rivermen this season, logging a goal and five assists before his call-up to ECHL Norfolk December 5. With the Admirals, Frank tallied an assist in 12 games, and the first-year pro was set to return to Peoria after clearing ECHL waivers Thursday. Rumble, meanwhile, remains with Norfolk, where he has notched a goal and an assist in 10 games after recording a goal and three helpers in 10 outings for Peoria this year. Last season, Rumble skated in 53 games for Peoria, tallying 16 assists, adding five helpers in seven postseason appearances.

Mulder comes to Peoria from Quad City in exchange for future considerations after he saw action in one game for the Storm this season, taking a loss after stopping 39 of 41 shots at Evansville last Saturday. With FHL Elmira this season, Mulder has gone 4-1-0 with a 2.01 goals-against average and a .922 saves rate.

Atwell and Gaul join Peoria after beginning this season with the FHL’s Danville Dashers. Atwell, a sixth-year pro, has 11 assists in 18 FHL games this year, and in his 155 career FHL games, the Toronto native has notched 13 goals and 56 assists. Gaul has posted 16 goals and 11 assists in 23 games for the Dashers this season, his first as a pro, after he wrapped up a four-year college career at Manhattanville College, where he was named team captain as a senior last season.

The Rivermen return to action this weekend when they host three games, Friday and Sunday against the Huntsville Havoc and Saturday against the Thunderbolts. Friday is Peoria’s annual flip calendar giveaway to the first 2,000 Rivermen fans. Friday is also Peoria’s annual Chicago Cubs night, with Cubs mascot Clark in attendance. Saturday Peoria will host their Miracle on Ice night presented by the Gift of Hope Organ and Tissue Donor Network. The Rivermen will wear special jerseys paying tribute to the 1980 USA Olympic hockey team that won the Gold Medal in Lake Placid, with a jersey auction to follow the game. Sunday Peoria will host another Family Fun Sunday presented by RLI and the Peoria Park District, featuring a pregame fun fest with inflatables, face painting, and balloon art presented by Fun on The Run, Wild Style Design, and Unique Twist, respectively. Tickets for all of Peoria’s remaining 2018-19 regular-season home games are available by calling the Rivermen office at (309)-676-1040.