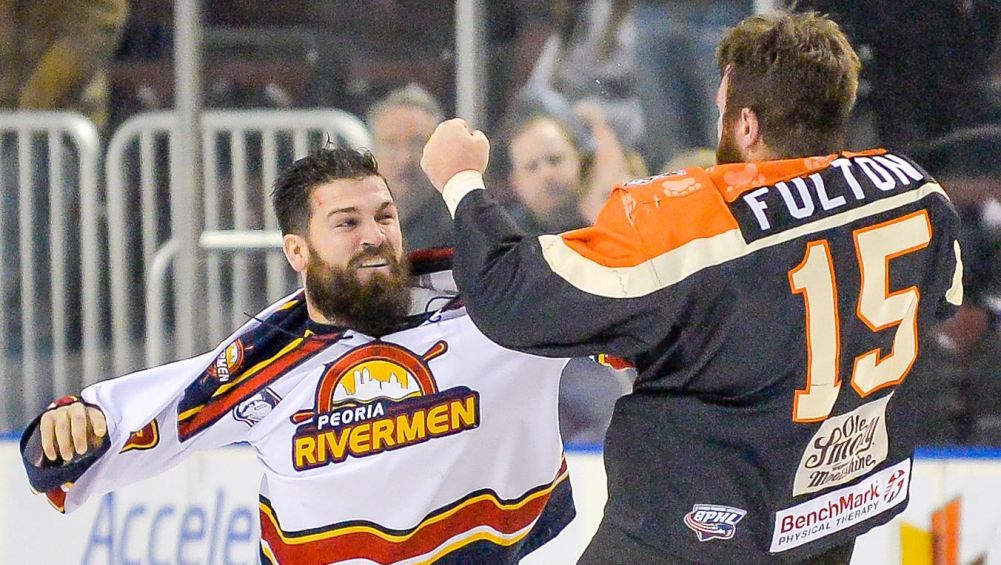 Peoria, IL – The Peoria Rivermen announced today that the team will sign veteran winger Dennis Sicard to a contract tomorrow morning prior to the team’s weekend home games against Knoxville and Quad City. Sicard comes to the Rivermen after he last played for the Macon Mayhem last season, when he notched eight goals and 22 assists in 50 outings.

Sicard, 33, returns to Peoria for the first time since the 2014-15 season, when he netted a goal and two assists over the course of 22 games for the Rivermen, racking up 114 penalty minutes before a January trade to Knoxville, where he went on to help the Ice Bears to a President’s Cup championship. In his career, Sicard has skated in 521 professional regular-season games, 476 in the SPHL, netting 114 career goals and 123 assists. The Cobourg, Ontario native currently holds the SPHL record with 2200 career regular-season penalty minutes and ranks second in league history for most regular-season games played.

“Dennis has been an intense competitor throughout his career, and he’s got two championship rings in the last four years to show for that,” said Rivermen head coach Jean-Guy Trudel. “He’s a great teammate on and off the ice, and his work ethic and toughness are great attributes to have. He knows what it takes to win a championship and we’re excited for him to bring that veteran presence here to Peoria.”

Sicard hoisted the 2015 President’s Cup with Knoxville and again captured the prize in 2017 with the Mayhem. In his pro career, Sicard has seen action in 29 postseason contests, tallying 12 goals, five assists, and a +5 rating over six postseasons, all in the SPHL.

The Rivermen return to action at home this weekend, taking on the Knoxville Ice Bears Friday and Saturday night before hosting the Quad City Storm Sunday afternoon. Friday is Peoria’s Drawstring Backpack giveaway to the first 1,000 fans courtesy of Homefield Energy. Saturday night Chicago Blackhawks legend Bobby Hull will be on hand, signing autographs on the concourse, and the Rivermen will wear specialty Blackhawks-style jerseys sponsored by The Fieldhouse Bar & Grill in Peoria. Sunday will serve as Peoria’s final Peoria Journal Star and Peoria Park District Family Fun Sunday, with discounted tickets for kids aged 12 & under, pregame inflatables presented by Fun on the Run, face painting from Wild Style Design, and balloon art by The Unique Twist. Friday’s and Saturday’s contests are set to begin at 7:15 PM, with Sunday scheduled for a 3:05 puck drop. Tickets for all of Peoria’s remaining home games are available by calling the Rivermen office at (309) 676-1040.