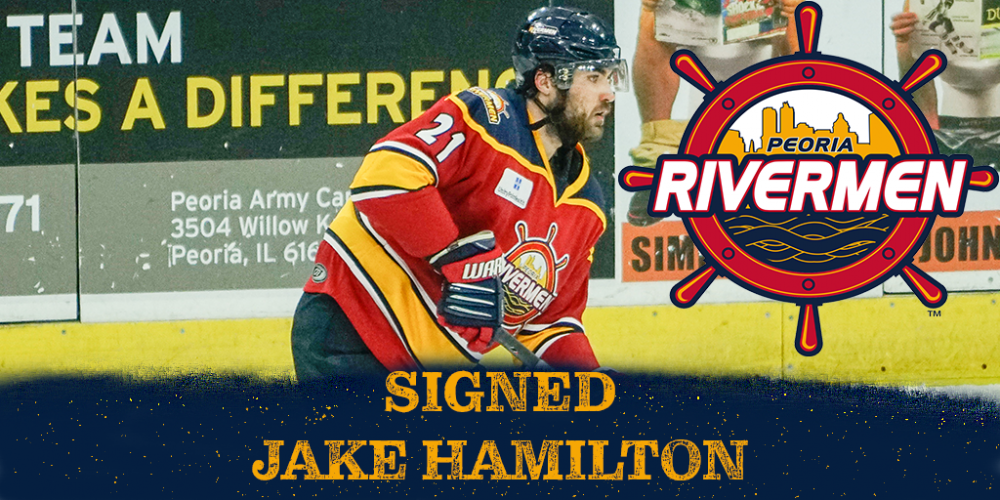 Hamilton looks to start his second season of pro hockey after playing his rookie year with the Rivermen in 2018-19, where he scored four goals and 16 points in 44 games.

“He grew a lot as a defender,” said Rivermen Head Coach Jean-Guy Trudel. “He’s now a complete defenseman. Now we’re gonna rely on him to take a step forward offensively and become a next level defenseman.”

“I’m excited to return to the Rivermen and play for Coach Guy (Trudel),” said Hamilton. “His knowledge of the game is unique. He’s played at the highest level and knows what it takes to be successful.”

Jake joins returning Rivermen Captain, Alec Hagaman, along with Cody Dion, Ben Oskroba, and goaltender Eric Levine, who spent time with the Rivermen from 2013-15, and during the 2017-18 season. Hamilton is the youngest of this group, and his reasons for joining the Rivermen once more are simple.

“I want to be part of a team that is hungry to win a championship,” said Hamilton. “This city and community have supported the Rivermen endlessly and they really deserve some hardware. I’m coming back to win.”

In other news, the Peoria Rivermen have brought on two more additions to their training camp, which is set to open in early October. Trent Durocher, 26, played two games for the Fayetteville Marksmen during the 2017-18 campaign before sitting out last season. Durocher brings size to Coach Trudel’s forward group, checking in at 6’5”, and 215lbs. Durocher played four years of college hockey at the NCAA Division III level for SUNY-Oswego and played seven games for SUNY-Potsdam.

The Rivermen have also inked Dave Nippard. A veteran forward, Nippard, 31, is coming off a year in which he produced over a point-per-game in the New Zealand Ice Hockey League (NZIHL), as well as the France3 with Morzine-Avoriaz. Originally from Canada, Nippard is looking to crack his first professional hockey team in the United States.