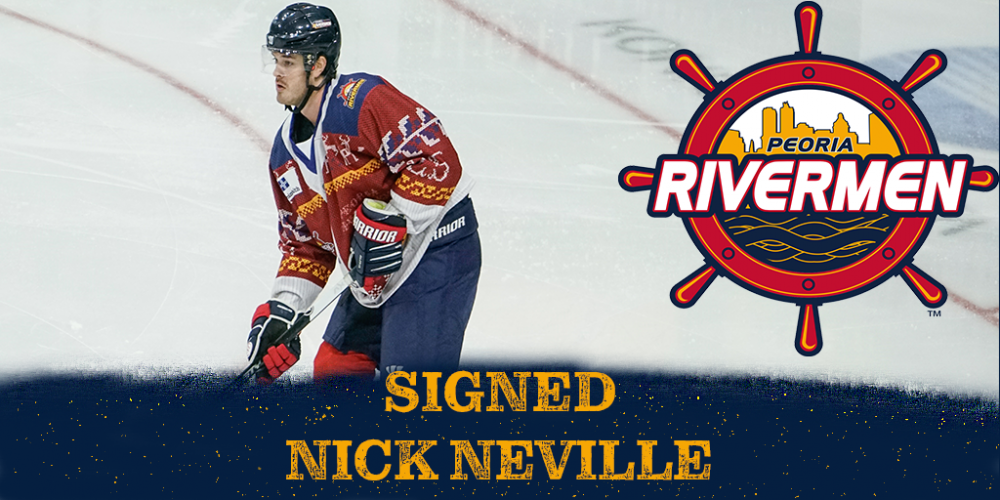 Neville, 26, skated in 50 games for the Rivermen last season and led the defense in scoring with four goals and 33 points. His time in Peoria spans parts of the last three seasons. Neville split time in 2016-17 between the Rivermen and South Carolina Stingrays in the ECHL. In 2017-18, the defender was sent to Reading in the ECHL, where he played 36 games for the Royals, along with three games in the Kelly Cup Playoffs.

“I'm very excited to be back with the Rivermen,” said Neville. “Guy is a coach I put my full trust in. He's a leader on the bench and in the locker room and has a way of inspiring his players. I love playing for him.”

Last season was the first time Neville played the bulk of a season with Peoria, after suiting up for a combined 17 games over the previous two campaigns. The righty shot was part of the best team in SPHL regular season history, as the Rivermen put together a 40 win season before exiting the playoffs against Roanoke.

“For the organization, I think we all know we fell short last year,” said Neville. “Personally, I want to take the experience I've gained over the years and use it to be a confident and dominant player every time I step on the ice this year. I want to help this team reach the finals and get the championship this city deserves.”

The Rivermen will bring forward Jon Buttitta in on a professional tryout agreement as well. From Middleburg Heights, OH, Buttitta started his professional career last season, skating in eight games for the Mentor Ice Breakers in the Federal Prospects Hockey League (FPHL). There, the 26-year-old tallied six goals and 12 points in eight games. During college, Buttitta played ACHA Division I hockey for Kent State University, currently the 15th ranked ACHA team in the nation. Over five seasons, Jon amassed 271 points in 175 games.

Nathan Pelligra has also signed a professional tryout agreement. Pelligra, 27, attended Rivermen training camp a season ago, before ultimately playing the bulk of the year in the Federal Prospects Hockey League (FPHL), splitting time between Danville and Elmira.The Webster, NY native did have a brief stint in the SPHL with Quad City, skating in six games for the Storm. He scored his only SPHL goal to date December 29 against Evansville.