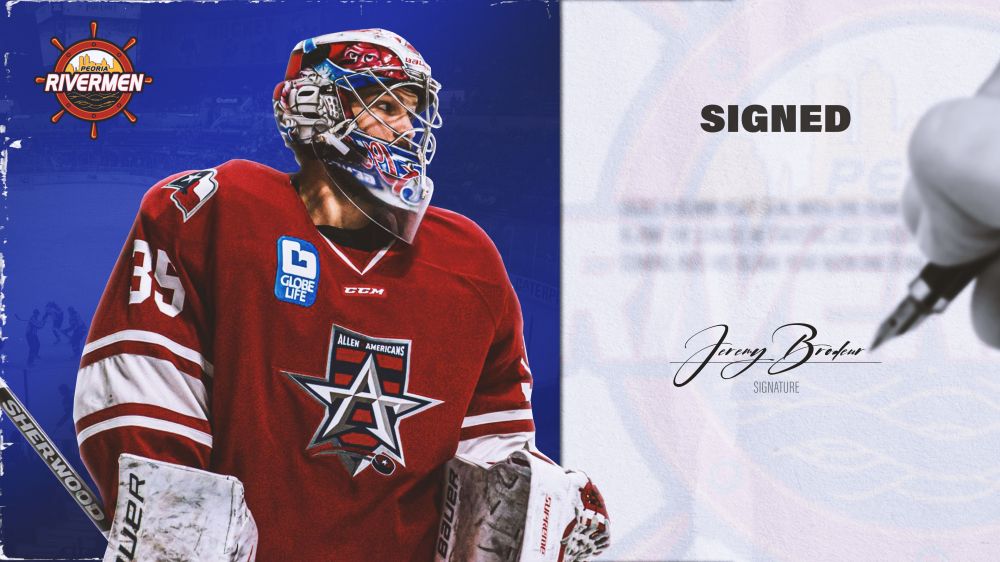 Peoria, IL- With the official SPHL 19 man rosters due to the league by Wednesday’s end, the Peoria Rivermen announced several roster moves Tuesday evening. Among those transactions was the signing of goaltender Jeremy Brodeur, son of Hockey Hall of Fame goalie and longtime New Jersey Devil, Martin Brodeur.

Coach Jean-Guy Trudel also signed forward Jordan Ernst, who spent time in both the ECHL and AHL a season ago.

With addition comes subtraction, meaning the Rivermen also had to release several players from training camp. Forwards Nathan Pelligra and Thomas Munichiello, along with defenseman Casey Dion were all cut from the team’s roster. The Rivermen also brought forward Justin Bernier in for practice on Tuesday, but released him afterwards.

Brodeur, 22, is one of three sons to the legendary Martin Brodeur. In his own right, the New Jersey native broke onto the junior hockey scene in the Ontario Hockey League (OHL) with the Oshawa Generals in 2014. That season, Brodeur played 19 regular season games, helping the Generals win the OHL Championship, before going on to capture the Memorial Cup in 2015. Since then, Jeremy has spent time in three different ECHL organizations, including the Allen Americans for parts of the last two seasons. Last year, Brodeur played 21 games between ECHL-Allen and ECHL-Norfolk, before being loaned to the American Hockey League’s (AHL) Binghamton Devils.

Ernst, 22, comes to Peoria following the bulk of his 2018-19 campaign spent with ECHL-Kansas City. The forward out of Mokena, IL tallied five goals and 14 points in 51 games with the Mavericks last season. Ernst got called up to the AHL’s Stockton Heat during the year, skating in one game for the Calgary Flames’ top affiliate. Before turning pro, Jordan played two seasons for the Sarnia Sting (OHL) and played 16 games for the Madison Capitals in the United States Hockey League (USHL).

Season, group, and single game tickets for Peoria's 38th season of professional hockey presented by Midwest Orthopaedic Center are on sale now at the Toyota Box Office in the Peoria Civic Center, or by phone at the Rivermen office (309)-676-1040, located at 201 S.W. Jefferson Street. Single game tickets can also be purchased on Ticketmaster. For the latest Rivermen news and notes, follow online at www.rivermen.net or through Facebook (www.facebook.com/PeoriaRivermen) Twitter(https://twitter.com/Peoria_Rivermen)