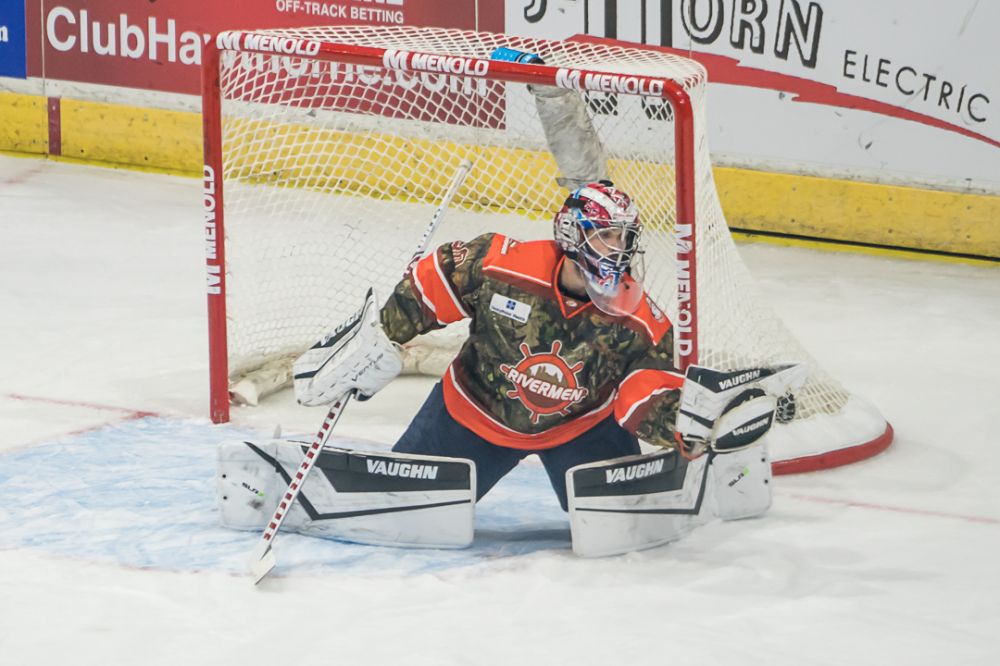 Peoria, IL – Jeremy Brodeur made his SPHL debut with his father in attendance, as the Rivermen defeated the Evansville Thunderbolts, 4-2 inside Carver Arena.Darren McCormick scored two goals and Ted Hart scored his first professional goal, helping the Rivermen start the 2019-20 season, 2-0.

The Rivermen jumped on the score board less than five minutes into the contest, when winger Darren McCormick stole a passing attempt from Evansville goaltender Max Strang on the right goal line, making it 1-0.

Peoria doubled their lead while on the power play near the end of the period. Kyle Thacker, who played last week for the Rivermen, but was traded to Evansville days before Saturday’s game took a tripping penalty. On the man advantage, Ted Hard took a feed from Jakob Reichert, skated into the offensive zone and fired a shot from the right corner that popped over Strang for the 2-0 Rivermen edge at 15:59 of the first period.

Peoria increased their lead past the halfway mark of the second period. Hart corralled the puck behind the Evansville net and slipped a pass to the left post where McCormick found it and forced it past Strang for the eventual game winning goal and 3-0 Rivermen lead at 14:23 of the middle period.

Evansville finally got on the board while on the power play in the closing minute of the second period. With Rivermen defenseman Ben Oskroba in the box for holding, Thunderbolts winger Jacob Smith fired a shot from the high slot that was deflected by Scott Donahue over the glove of Rivermen netminder Jeremy Brodeur to cut the Peoria lead to 3-1 at 19:16 of the second frame.

Peoria added to their lead just past the five minute mark of the third period when winger Cody Dion took a pass from Alec Baer and skated in and snapped a shot from the right circle that knuckled over the head of Strang and the 4-1 Rivermen lead at 5:02 of the third period.

The Thunderbolts cut the Rivermen lead in half just past the midway point of the third period. Evansville center Mathew Barnaby received a pass from teammate Connor Sanvido and snapped a shot that trickled past Brodeur for the 4-2 score at 12:40 of the third period.

Brodeur earned the victory between the pipes stopping 28 of 30 shots faced in the Rivermen victory. The win is Brodeur’s first since the 2018-19 season with the ECHL’s Allen Americans.

Notes: With his power play goal, Ted Hard scored his first professional goal, Hart added an assist as well for his first multi-point professional outing.…Alec Baer earned his first SPHL multi-point game with two assists….Cody Dion scored his first goal of the season back with Peoria, his last goal in a Rivermen sweater was March 31, 2018 vs. Roanoke, Darren McCormick’s first goal of the game was his 50th SPHL goal. The Rivermen return to action Tuesday morning when they hit the road to Evansville, IN to visit the Ford Center for the first time in the 2019-20 campaign…Tuesdays game gets started  at 10:00 a.m. Central Time….The broadcast of the game can be heard, at http://mixlr.com/peoria-rivermen/ starting with the pre-game show at 9:45 a.m.

Group, single game, and season tickets for Peoria's 38th season of professional hockey presented by Midwest Orthopaedic Center are on sale at the Toyota Box Office in the Peoria Civic Center, or by phone at the Rivermen office, located at 201 S.W. Jefferson Street, by calling (309) 676-1040. For the latest Rivermen news and notes, follow online at www.rivermen.net or through Facebook (www.facebook.com/PeoriaRivermen) - Twitter(https://twitter.com/Peoria_Rivermen)