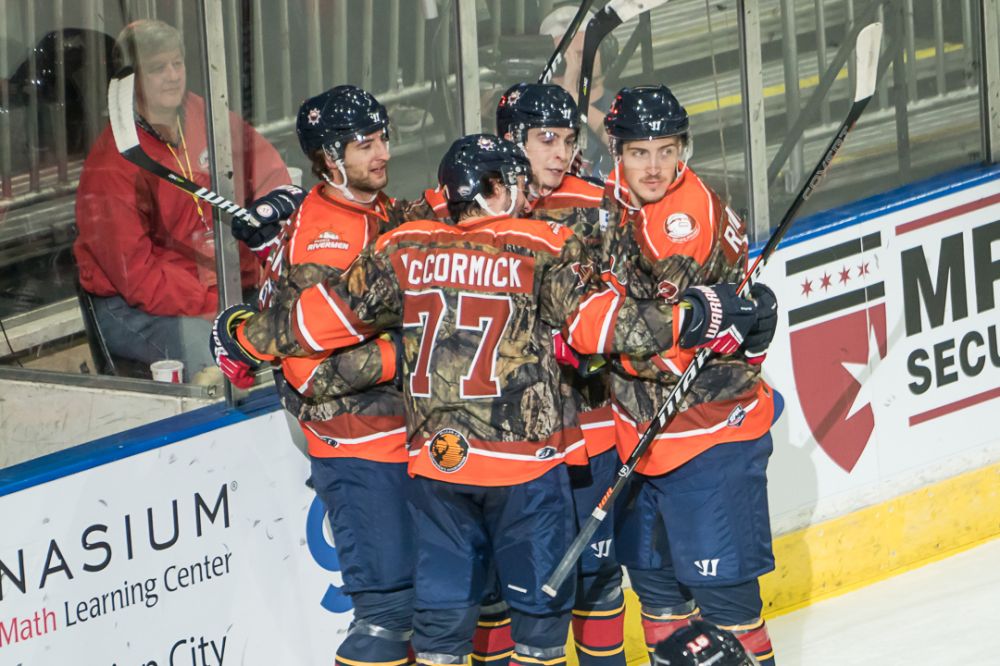 Evansville, IN – Eric Levine made 30 saves and four different goal scorers propelled the Rivermen over the Evansville Thunderbolts Tuesday morning by a 4-2 final. The win pushes coach Trudel’s group to 3-0; the best start for a Peoria Rivermen team since the club’s inaugural AHL season in 2005-06.

The Ford Center erupted early and often Tuesday morning, with the Thunderbolts’ Education Game bringing thousands of screaming kids into the arena. The Rivermen attempted muting the stands less than five minutes in, with Ben Oskroba catching a pass in the slot to beat Evansville goalie, Braeden Ostepchuk. Darren McCormick and Ted Hart earned helpers on Oskroba’s first of the season.

Evansville struck back less than three minutes later to tie the game after one period. In the second, Mitch McPherson scored his first of the year, receiving a backhand pass in front of the net from Jakob Reichert, making it 2-1.

After a penalty-free first period, 26 minutes were handed out in the second, including a pair of minors against Reichert, along with Skyler Smutek being assessed a 10 minute misconduct. The Rivermen were credited just two power plays, while the team successfully killed all five minors assessed.

Jordan Ernst would earn the game winning goal, roofing a shot past Ostepchuk for his first of the season, thanks in part to a great feed from Alec Hagaman.

After getting within one goal on a one timer from Connor Sanvido, Darren McCormick would finish the scoring with a sensational goal that serves as a goal of the year candidate. After being left alone behind the Evansville net, McCormick failed to find a passing option. Instead, the talented forward corralled the puck on his tape, lifting it in front of the net and spinning it past Ostepchuk 11:26 into the third for the game winner. The Thunderbolts pushed back late, earning more power play time and pulling the goalie for parts of the last two minutes, but the Rivermen successfully held on.

Notes: Ted Hart and Jakob Reichert each tallied assists, extending their point streak to three games. McCormick also pushed himself to three games…the Rivermen win over Evansville on the Road is the ninth consecutive win at the Ford Center…Evansville has not won a home game against Peoria since January 2018…. Next up, the Rivermen host the Macon Mayhem Friday and Saturday at Carver Arena, beginning a stretch of four consecutive games against the Mayhem…

Group, single game, and season tickets for Peoria's 38th season of professional hockey presented by Midwest Orthopaedic Center are on sale at the Toyota Box Office in the Peoria Civic Center, or by phone at the Rivermen office, located at 201 S.W. Jefferson Street, by calling (309) 676-1040. For the latest Rivermen news and notes, follow online at www.rivermen.net or through Facebook (www.facebook.com/PeoriaRivermen) - Twitter(https://twitter.com/Peoria_Rivermen)