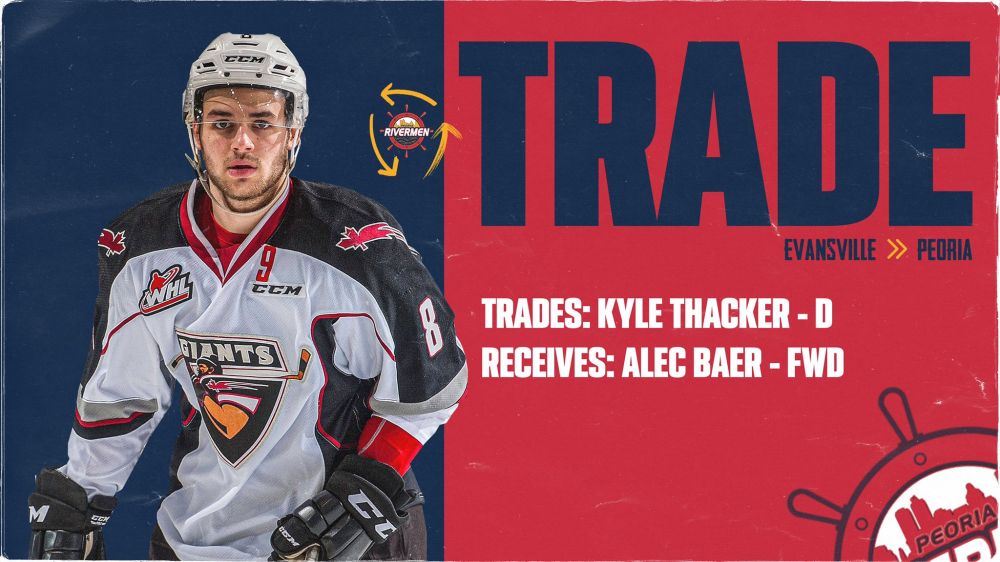 Peoria, IL- The Peoria Rivermen announced on Wednesday that the team has traded defenseman Kyle Thacker to the Evansville Thunderbolts in exchange for center Alec Baer. Additionally, the Rivermen have also released forward Dave Nippard.

Baer, 22, is a Minnesota native who spent parts of six seasons in the Western Hockey League (WHL), mostly with the Vancouver Giants. In 2018, Baer earned a shot toward the end of the year with ECHL-Rapid City, skating in eight games. Last season, the 5’10” center spent his entire season in the ECHL, playing 42 games between the Rush and Maine Mariners, scoring seven goals and 13 points.

Thacker was shipped to the Thunderbolts after making it through training camp and skating in opening night for the Rivermen last week against Quad City, registering no points and two penalty minutes.

Nippard, like Thacker, skated through training camp and centered lines in both the team’s exhibition game and the regular season opener. The 31-year-old was a -1 against Quad City and had the team’s first official fighting major of the season.

The Rivermen return to action Saturday, October 26th at home against the Evansville Thunderbolts. Puck drop is scheduled for 7:15PM. Saturday’s game is Mossy Oak® Night, presented by McLean County Sportsman’s Association. The Rivermen will sport specialty camouflaged jerseys that will be auctioned off following the game. Saturday is also Chicago Blackhawks Night, featuring an appearance by mascot TOMMY HAWK!

Single game, group, and Season tickets for Peoria's 38th season of professional hockey presented by Midwest Orthopaedic Center are on sale now at the Toyota Box Office in the Peoria Civic Center, or by phone at the Rivermen office, located at 201 S.W. Jefferson Street, by calling (309) 676-1040. For the latest Rivermen news and notes, follow online at www.rivermen.net or through Facebook (www.facebook.com/PeoriaRivermen) - Twitter(https://twitter.com/Peoria_Rivermen)