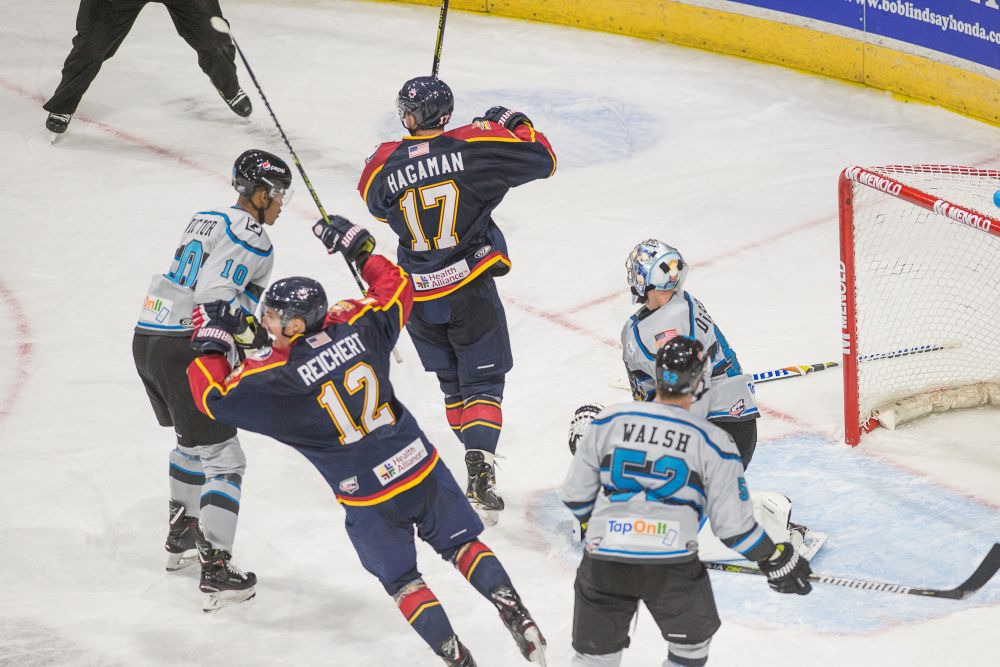 Peoria, IL – The Peoria Rivermen and Quad City Storm renewed the “Cold War on 74” to open the SPHL season in front of 5,321 fans at Carver Arena Saturday night. The Rivermen held a two-goal lead, but Quad City fought back to tie the game early in the third period before a stunning overtime goal by the Rivermen.

The Rivermen opened the scoring just prior to the midway point of the opening period. Rivermen captain Alec Hagaman received a pass while streaking across the top of the slot from defenseman Skyler Smuteck. Hagaman then blasted a shot over the glove of Storm goaltender Peter Di Salvo for the 1-0 lead at 8:08 of the opening frame.

Peoria doubled their lead in the closing moments of the first period while on the powerplay. With Quad City center Dean Yakura serving a holding penalty, Rivermen winger Jake Henderson controlled the puck along the right-wing boards and slipped a pass to the high slot where defenseman Jake Hamilton hammered a one-timer that snuck through Di Salvo’s legs and into the back of the net for the 2-0 Rivermen advantage at 19:24 of the first.

Quad City cut into the Rivermen lead near the end of the middle stanza when Yakura stuffed the puck under the pads of Rivermen goaltender Eric Levine, making the score 2-1 with two minutes to play in the second.

The Storm evened the score 5:35 into the third when winger Shane Bennett skated down the left wing boards and put a shot on goal that Levine stopped, but winger Taylor Pryce chipped the rebound over Levine’s shoulder, making the score 2-2 enroute to forcing overtime.

The Rivermen scored the eventual game winner near the halfway point of the overtime session while on the powerplay. With Bennett serving a slashing penalty for the Storm, Rivermen winger Ted Hard fired a blast from the top of the slot that Reichert deflected over Di Salvo for the 3-2 Rivermen victory at 2:40 of the overtime period. Peoria had a double screen set up in front with Hagaman and Reichert. The captain was initially awarded the goal, but replay credited Reichert with his first as a Rivermen.

Levine earned the opening night victory between the pipes for the Rivermen, stopping 24 of 26 shots. The Rivermen begin their season 1-0-0, and now have a 13-3-1 all-time record against Quad City.

Notes: With an assist on the OT game winning goal, Ted Hard collected his first professional point in his first pro outing….With the win, Rivermen head coach Jean-Guy Trudel needs three victories to tie Jason Christie as the winningest all-time Rivermen head coach….With an assist on Hagaman’s first goal, Smutek picked up his first point since February 15th vs. the Macon Mayhem….The Rivermen return to action Saturday night, hosting the Evansville Thunderbolts for the first time this season…Saturday’s game starts at 7:15 Central Time…Saturday’s game features specialty jerseys worn by the Rivermen that will feature Mossy Oak® camouflage….Saturdays game is also Blackhawks night with an appearance by Tommy Hawk….The broadcast of the game can be heard, starting with the pre-game show, at 7:00 p.m. at http://mixlr.com/peoria-rivermen/. Fans can also watch the game broadcast with an SPHL Live membership.

Group, single game, and season tickets for Peoria's 38th season of professional hockey presented by Midwest Orthopaedic Center are on sale at the Toyota Box Office in the Peoria Civic Center, or by phone at the Rivermen office, located at 201 S.W. Jefferson Street, by calling (309) 676-1040. For the latest Rivermen news and notes, follow online at www.rivermen.net or through Facebook (www.facebook.com/PeoriaRivermen) - Twitter(https://twitter.com/Peoria_Rivermen