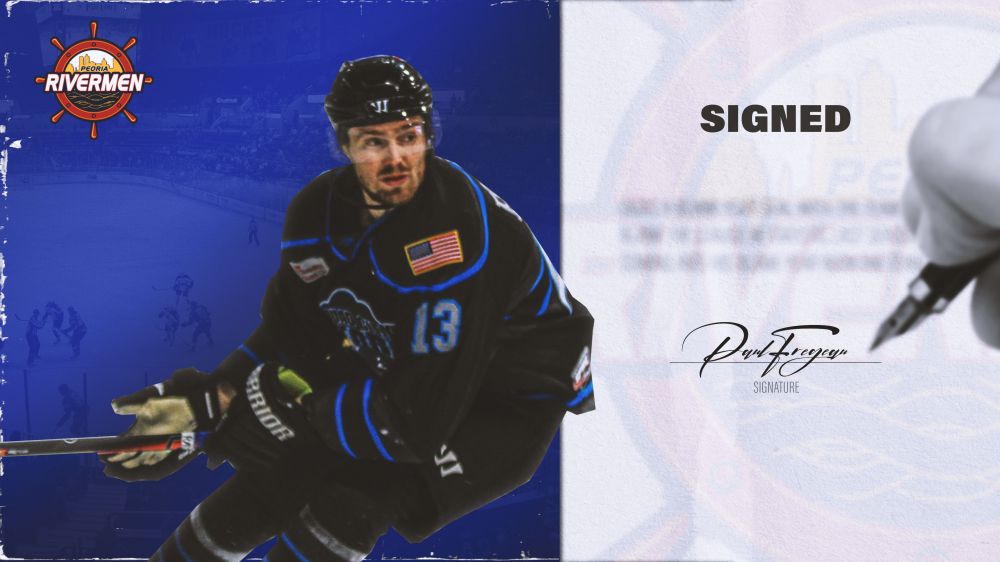 Peoria, IL- The Peoria Rivermen announced the signing of defenseman Paul Fregeau. The 26-year-old made the Quad City Storm opening night roster, but was released following their first game and did not play.

Fregeau hails from Sylmar, CA, a suburb of Los Angeles. The 6’3”,195 pounder played NCAA-DIII hockey for SUNY-Cortland and SUNY-Platsburgh. Fregeau began his first full season as a pro last year, spending the bulk of his time with the Fayetteville Marksmen, where he played with current Rivermen-Darren McCormick. In 42 games with Fayetteville, Fregeau scored one goal and collected six points before being traded to Quad City late in the season. He scored a goal and tallied one assist in 10 games with the Storm.

The Rivermen return to action Saturday, October 26th at home against the Evansville Thunderbolts. Puck drop is scheduled for 7:15PM. Saturday’s game is Mossy Oak® Night, presented by McLean County Sportsman’s Association. The Rivermen will sport specialty camouflaged jerseys that will be auctioned off following the game. Saturday is also Chicago Blackhawks Night, featuring an appearance by mascot TOMMY HAWK!

Single game, group, and Season tickets for Peoria's 38th season of professional hockey presented by Midwest Orthopaedic Center are on sale now at the Toyota Box Office in the Peoria Civic Center, or by phone at the Rivermen office, located at 201 S.W. Jefferson Street, by calling (309) 676-1040. For the latest Rivermen news and notes, follow online at www.rivermen.net or through Facebook (www.facebook.com/PeoriaRivermen) - Twitter(https://twitter.com/Peoria_Rivermen)