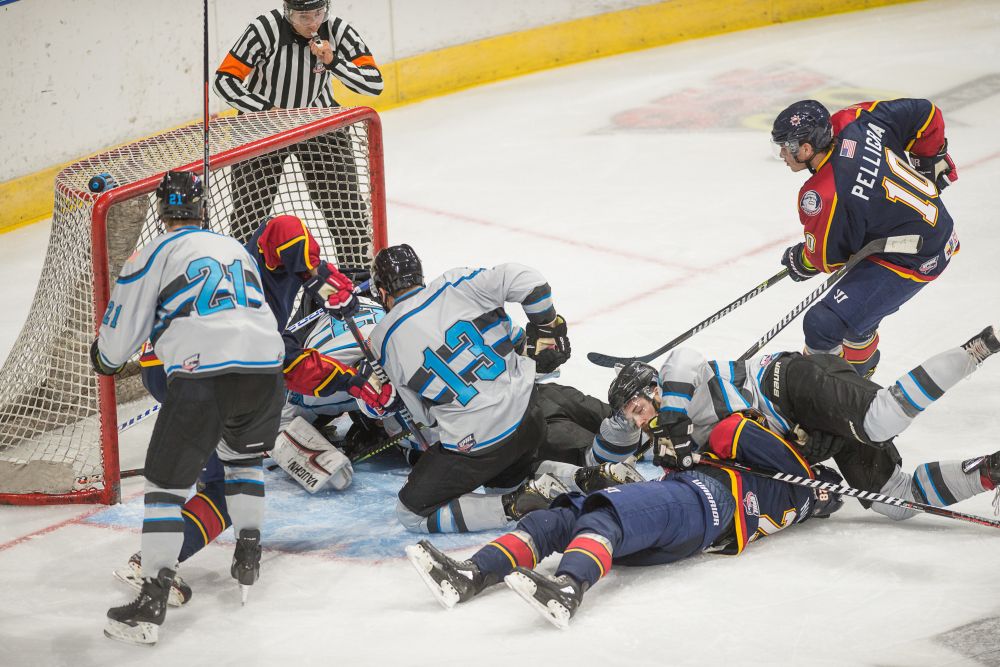 Nieminen, Moran goals not enough to propel Rivermen to victory

Peoria, IL – The Peoria Rivermen and Quad City Storm reacquainted themselves in a preseason matchup Saturday night at Carver Arena. The Storm Struck first and never looked back on their way to a 4-2 victory over the Rivermen.

The Storm opened the scoring early in the first when Ludlow Harris Jr. carried the puck across the center ice logo, raced down the right wing and snapped a shot that snuck past the trapper of Rivermen goaltender Brody Clayes for the 1-0 lead at 2:19 of the opening stanza.

Quad City increased their lead in the middle period of play when Vincent Beaudry raced through the right circle and snapped a shot on goal that was initially stopped by Claeys. The puck danced atop the crease where Storm winger Dakota Klecha backhanded it to the top of the net for the 2-0 lead at 6:47 of the middle frame.

Quad City added to their lead in the opening minutes of the third period when forward Taylor Gauld raced down the slot and released a shot that handcuffed Claeys on the blocker side, trickling into the net for the 3-0 advantage.

Peoria broke the Storm shut-out bid near the mid-way point of the third period when defenseman Aleh Shipitsyn raced down the left wing boards into the Quad City zone and backhanded a shot on goal that Storm goaltender Henry Dill kicked aside. Shipitsyn corralled the rebound and fed Zach Nieminen, who snapped a shot just past the outstretched left pad of Dill, cutting the lead to 3-1 at 9:13 of the third period.

Quad City re-established its lead to three just past the midway point of the third period thanks to a tic-tac-toe play from Fred Hein, Paul Fregeau, and finishing with Dalton Mills, who slammed a shot past Claeys, making it 4-1 Storm.

Peoria got within two goals once more thanks to a power play tally from Michael Moran, who shot a bullet from atop the left circle past Dill, cutting the Storm lead to 4-2 at 13:38 of the third period.

Claeys took the loss between the pipes for the Rivermen in his first professional appearance stopping 27 of 31 shots faced.

Notes: Rivermen defenseman Ben Oskroba served a bench coach while Jean Guy Trudel looked on from the upper bowl….Moran missed a penalty shot in the third period; the shot beat Henry Dill but clanked off the crossbar and over the top of the net…Rivermen captain Alec Hagaman, forward Jordan Carvalho, defenseman Nick Neville, and winger Cody Dion did not dress for the preseason matchup…The Rivermen return to action Saturday night when they open the 2019-20 season as they welcome the Quad City Storm to Carver Arena…Saturday’s game starts at 7:15 Central Time…Saturday’s game is Bruce Saurs Hockey Night in Peoria, presented by Envision Insurance, with the first 2,500 fans receiving Rivermen magnetic schedules….The broadcast of the game can be heard live, starting with the pre-game show at 7:00 p.m. on http://mixlr.com/peoria-rivermen/

Group, single game, and season tickets for Peoria's 38th season of professional hockey presented by Midwest Orthopaedic Center are on sale at the Toyota Box Office in the Peoria Civic Center, or by phone at the Rivermen office, located at 201

S.W. Jefferson Street, or over the phone at (309) 676-1040. For the latest Rivermen news and notes, follow online at www.rivermen.net or through Facebook (www.facebook.com/PeoriaRivermen) - Twitter(https://twitter.com/