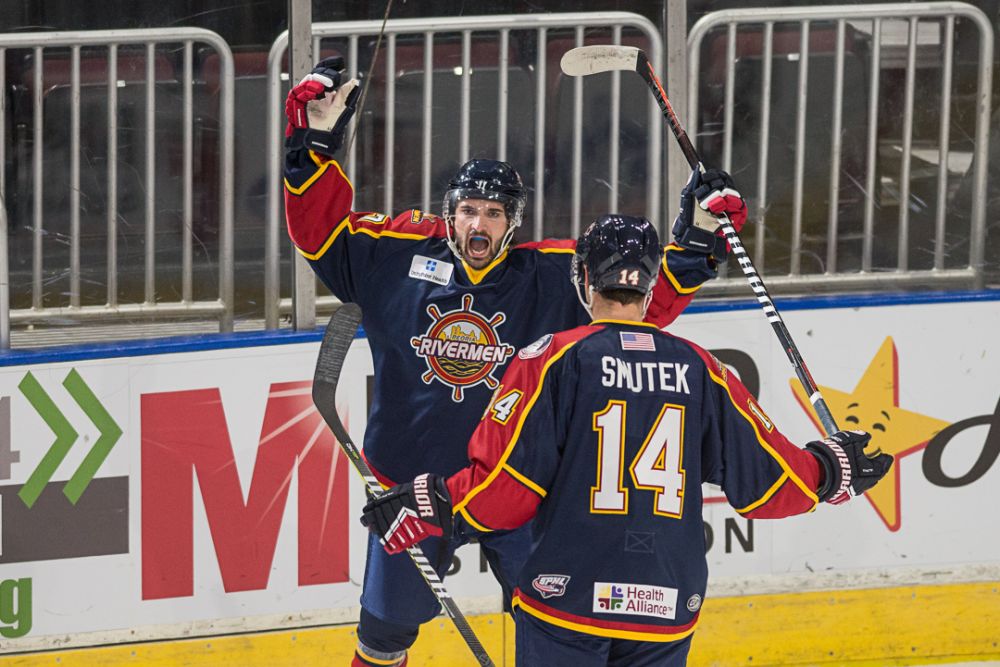 Moline, IL- Darren McCormick scored his league leading 11th goal of the season in the first minute of overtime, helping the Rivermen beat Quad City, 4-3 at TaxSlayer Center. The Rivermen improve to 9-0-1 on the season, sitting alone at the top of the SPHL standings.

Despite the win, Quad City made the entire night a difficult one for Jean-Guy Trudel’s group. The team had to battle back from two deficits and didn’t take a lead until the third period.

The Storm converted twice in the first period while on the man advantage. Mathias Ahmen one-timed a deep slot drive that leaked off Rivermen goaltender Eric Levine, trickling into the goal for the 1-0 lead.

Zach Nieminen would have himself a very eventful game. The Buffalo State product tied the contest in the first, but another Storm goal from Dakota Klecha had Peoria down headed to intermission. Just over three minutes into the second, Nieminen picked a puck up from the right half-wall and slid it through Storm goaltender Peter Di Salvo to tie the game.

Fast forward to the third period where Ludlow Harris dropped the gloves with Zach, who threw a number of sharp rights to drop the Storm defender. Nieminen’s night would end there, with the forward being handed 17 penalty minutes in a game that had numerous minutes handed out and chaos through the end of the second period that would carry into the third.

Before Nieminen’s fight, the Rivermen got their first lead of the game inside the two minute mark of period three. With a man already in the box for Quad City, the club would then be guilty of too many men on the ice, giving the Rivermen a brief five-on-three that they would not waste. Alec Hagaman fed Jordan Ernst on the left side, who shelfed a wrist shot by Di Salvo to make it a 3-2 game.

The Storm continued pressing, and eventually caught a break with a poor change from the Rivermen. Quad City transitioned quick and into the attacking zone, where Klecha had a shot blocked by Nick Neville, bounce off Neville, and back to Klecha for his second goal of the game with 5:22 to play.

For the second time in as many meetings, the Rivermen and Storm would need overtime. Darren McCormick, who had yet to score and extend his goal streak, caught himself at the right place, at the right time. A loose puck in center was tossed toward the winger at Quad City’s blue line. McCormick had a defenseman on his back, but managed to cut in close, go to his backhand, and tuck the puck through Di Salvo’s legs for the overtime finish. McCormick became the first player in the Rivermen’s SPHL-era to score a goal in nine straight games.

Eric Levine made 25 saves against his former team for the win. Di Salvo was credited for 33 stops in the losing effort. Quad City is 4-4-3 on the season. The teams will oppose one another again Saturday night, with the scene shifting to Carver Arena.