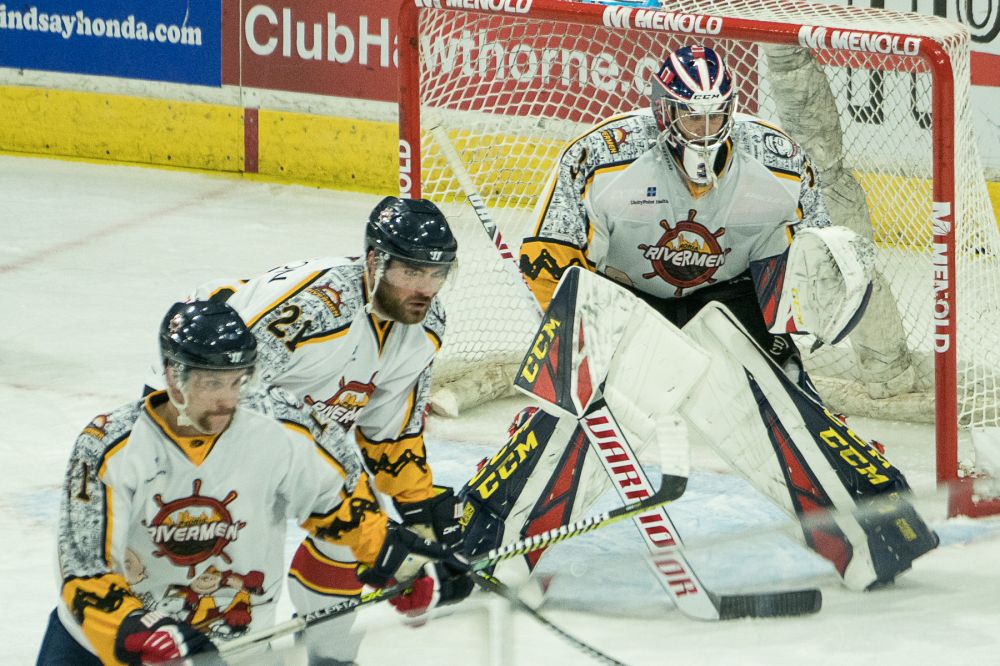 Peoria, IL – The Peoria Rivermen welcomed the Huntsville Havoc to Carver arena for the first time this season, but the hosts were stingy when it came to defense. Jakob Reichert notched the game winning goal in his return from an ECHL call-up, and a 30 save shutout helped Peoria blank Huntsville, 4-0 in front of 3,209 fans Friday night at Carver Arena. With the win, the Rivermen improve to 11-0-1 on the season and sit atop the SPHL standings with 23 points, two ahead of Fayetteville who were idle Friday night.

The Rivermen opened the scoring just over five minutes into the contest. Peoria center Zach Nieminen raced into the offensive zone and slipped a pass across the top of the slot where Jakob Reichert fired a shot over the left shoulder of Huntsville goaltender Mike DeLaVergne for the 1-0 Rivermen edge at 6:40 of the opening frame.

Peoria added to their lead just a little over four minutes later when Reichert dished a pass across the top of the crease to Darren McCormick who tallied his 13th goal of the season for a 2-0 Peoria lead.

The Rivermen added to their total in the second period with a pair of goals. The first of the period came on the power play. With Havoc defenseman Sam Posa serving a hooking penalty, the Rivermen capitalized when Alec Hagaman found Jordan Ernst in the left circle. Ernst took the feed and fired a shot that found its way into the back of the net for the 3-0 Rivermen lead, giving Ernst goals in four straight. Peoria added their fourth goal in the closing minutes of the second period when Robin Hoglund found the puck in front of DeLaVergne and stuffed it under the sprawling goaltender for the 4-0 lead at 18:11 of the middle stanza. Hoglund was credited for his first SPHL goal.

Eric Levine earned the victory between the pipes, stopping all 30 shots faced, notching his second shutout of the season and 10th of his professional career. With the win, Levine improves to 6-0-1 on the campaign.

Notes: With a goal in the contest, McCormick now has goals in 11 straight games, and has collected at least a point in 12 straight games….With two assists in the contest, Hagaman notched his third consecutive multi-point game….Reichert extended his point streak to 9 games with his first period goal….Ernst notched his 5th goal in his last four outings….The Rivermen return to action Saturday night for the rematch with Huntsville at Carver Arena….The Rivermen will wear special Peanuts themed jerseys for the contest….Saturday night’s game will also feature Peoria’s annual Stuff-A-Bus campaign where fans can bring a nonperishable canned good and receive an entry to win a signed Rivermen Peanuts jersey…Friday’s game gets started  at 7:15 p.m. CST….The broadcast of the game can be heard, at http://mixlr.com/peoria-rivermen/ starting with the pre-game show, at 7:00 p.m. CST.