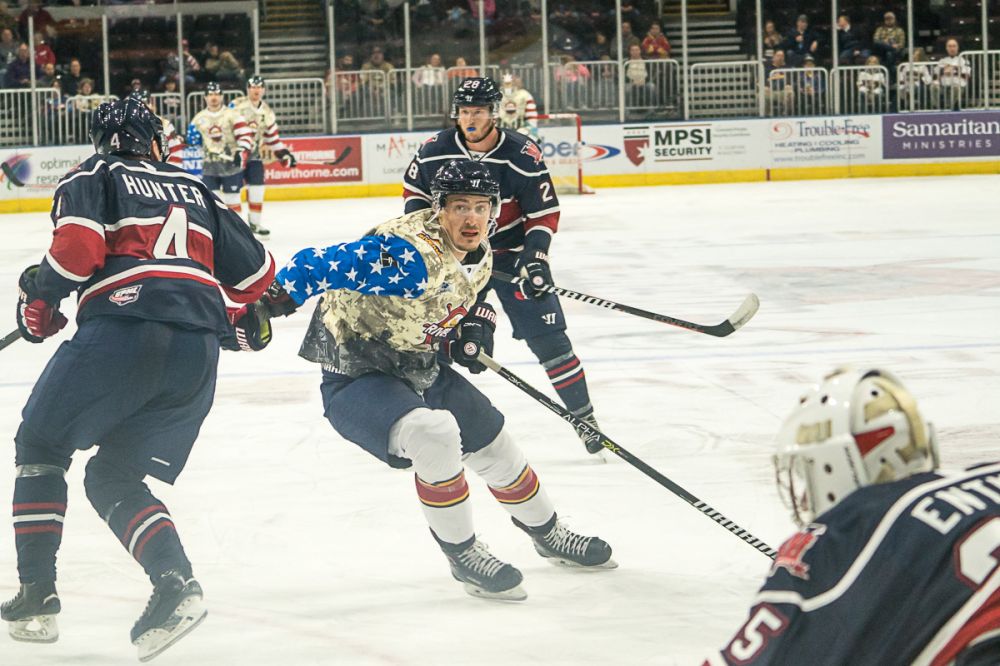 Macon, GA- Jeremy Brodeur turned aside over 40 shots, and Jakob Reichert tallied a career-best four points (one goal, three assists) to help Peoria sail past the Macon Mayhem Saturday night by a 5-2 final. The win starts the Rivermen at 7-0 to begin the year, making the team just the third club in SPHL history to begin a season 7-0.

Brodeur’s first period performance kept coach Trudel’s group in the game. With Alec Hagaman and Skyler Smutek both absent due to suspension, the Mayhem had jump in their step, outshooting the Rivermen, 22-7 through 20 minutes. Brodeur managed to keep the game scoreless, stopping every shot, including two shorthanded situations for Peoria.

The game’s first goal came in the second when Jakob Reichert shot a two-on-one opportunity through Macon goaltender Cody Porter for the 1-0 advantage 6:24 into the second.

A response came over four minutes later when Daniel Perez shot a one-timer through the legs of Brodeur on the power play. Both teams would score again late in the period. Paul Fregeau took a point shot that was tipped in front by Reichert, giving the second year pro his second goal on the night with less than two minutes to play in the period. The lead would not last, however, with Danny Cesarz finding a rebound to smash past Brodeur with 12 seconds to play.

Period three proved to be the difference maker in Saturday’s contest. Peoria scored three unanswered goals by way of Darren McCormick, Nick Neville, and Jordan Ernst. McCormick’s league-leading 8th goal of the season came on a touch pass in the neutral zone from Reichert that sprung McCormick past the Mayhem defense. The former Mayhem forward cut through, riding his backhand to get by Porter.

Nick Neville then benefited from a power play near the midway point of the third. The defender ripped a shot from atop the blue line, scoring his first of the season and first in 30 games. Ernst finished the scoring off by slipping through a pair of defenders to creep in on Porter and score in-tight for his second of the season.

The Rivermen continue a five game road trip next weekend with games against the Evansville Thunderbolts, starting Friday night. The broadcast of the game can be heard at http://mixlr.com/peoria-rivermen/ ,starting with the pre-game show at 7:00 p.m. CST.