Rivermen Hang on to Edge Evansville, 3-2 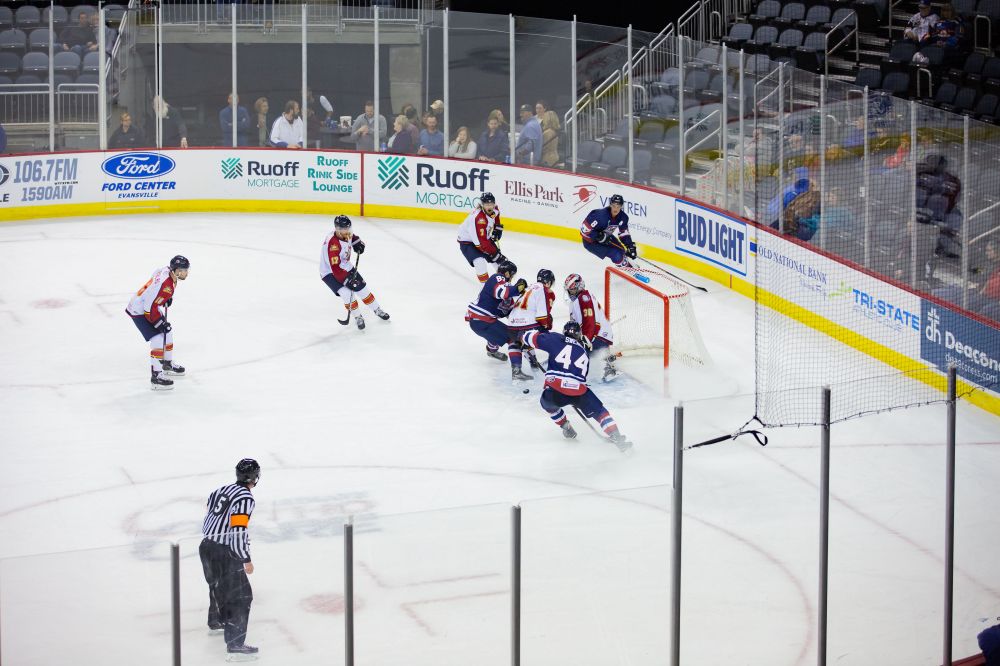 Rivermen Hang on to Edge Evansville, 3-2

Early start, strong finish helps Peoria get back in the win column

Evansville, IN- A three goal first period gave the Peoria Rivermen enough of a cushion to outlast Evansville, defeating the Thunderbolts Saturday night at the Ford Center to split the weekend pair of games.

After a disappointing effort Friday in the team’s shootout loss, head coach Jean-Guy Trudel made sure his team was ready from the start in Saturday’s rematch, even with the club being short a skater due to Jakob Reichert getting called up to the ECHL’s Fort Wayne Komets. Peoria tallied all three of their goals in the opening period, outshooting Evansville, 13-9. Though Evansville would retaliate with a goal late in the first and another in the second, the Rivermen suppressed the home team in period three, limiting Evansville to a season-low three shots on goal, allowing Jeremy Brodeur to pick up the win in goal and improve Peoria’s record to 8-0-1.

Darren McCormick for the second night in a row scored the game’s first goal. A quick transition through the neutral zone saw defenseman Theo Calvas dish a pass to McCormick through center. The SPHL’s leading scorer cut through a pair of defenders to break free to the front of the net, beating Parker Gahagen low for the 1-0 advantage 5:24 in. McCormick registered his 10th goal of the season and has scored in eight straight games; a new career-best for the third year pro.

Exactly two minutes later, Jordan Ernst cashed in on a cross-ice feed from Alec Hagaman. Ernst drilled a wrist shot past the blocker of Gahagen for his third of the season. His first goal with the Rivermen came nearly three weeks earlier when the team visited the Ford Center for a morning game.

Peoria’s final goal, which would end up serving as the game winner, would come from Alec Baer 13:19 into the first. Baer tallied his first goal as a Rivermen by striking on his former team. With a Peoria power play about to expire, Baer stepped into the right circle where he rifled one to the far side of the goal. The power play expired a second before Baer’s shot went in.

Evansville responded late in the first with a last minute goal coming from Kenton Helgesen. The former Anaheim Ducks draft pick sent a point shot in traffic that found its way by Brodeur to get Evansville on the board.

In the second, Ernst was assessed a minor penalty for an illegal check. Less than half a minute into the power play, Jacob Smith lined up a one-timer from the left circle that rocketed past Brodeur, cutting the deficit to one for Evansville. The goal was Smith’s first as a pro.

Peoria managed to outshoot Evansville, 31-21 in the contest, including a 9-3 advantage in the third period; a critical frame in which the Rivermen stuck to a structurally sound game to depart Indiana with the win, and three out of a possible four points on the weekend.

Brodeur got the win in goal, making 19 saves to improve his record to 4-0. Peoria is 8-0-1, while Evansville fell to 3-6-1. The Rivermen conclude a five game road trip Friday night when the team makes their first visit of the season to Quad City.