Rivermen Punch Their Way Through Macon In 5-3 Win 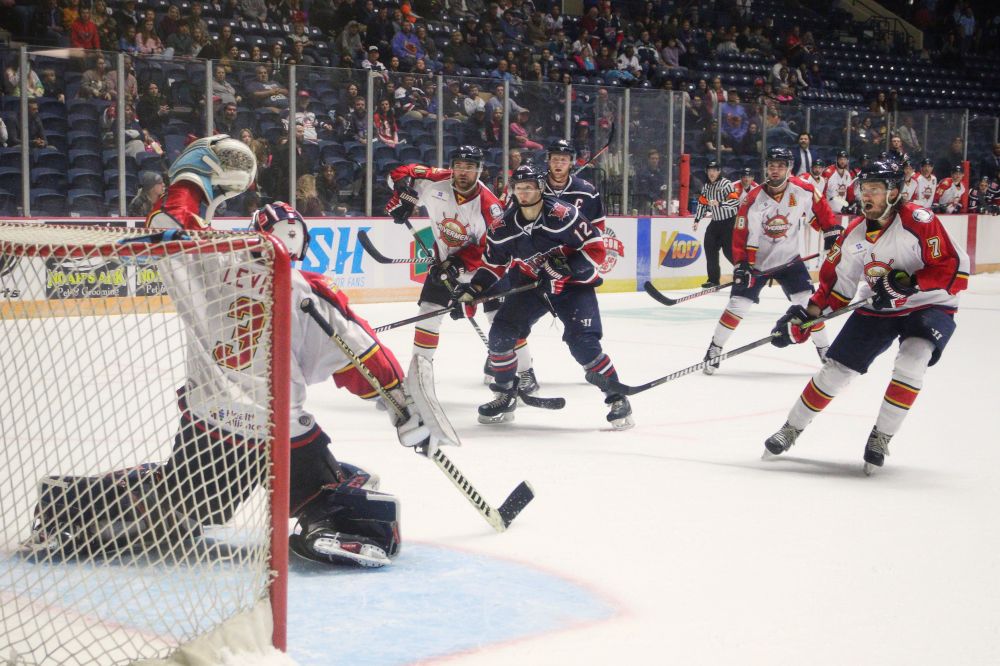 Rivermen Punch Their Way Through Macon In 5-3 Win

Macon, GA- In a game that featured three fights and a combined 110 penalty minutes, the Rivermen found their way through the chaos, picking up a 5-3 win on the road in Macon. Eric Levine made 32 saves in the winning effort, on top of receiving a fighting major. Peoria now continues to push forward in their franchise-best start to a season, now sitting at 6-0.

Both teams found goals in the first half of period one. Danny Cesarz scored first, giving the Rivermen their first deficit of the 2019-20 season after going over 310 minutes without trailing. Coach Trudel’s group was down for all of a little over two and a half minutes, before Nick Neville flung a point shot toward the net that was redirected in by Zach Nieminen through Macon starter Alex Fotinos. With seconds to go in the opening frame, Levine took exception to a shove by Macon’s Stepan Timofeyev. The Mayhem forward dropped his gloves, throwing a series of punches at Levine that prompted several players from both sides to begin throwing fists. Skyler Smutek jumped the boards to join the fray, meaning the Rivermen defender was ejected from the game and awaits a further announcement regarding possible suspension.

After minutes passed in cleaning up the debris of gloves, one final face-off would come in the neutral zone with 1.5 seconds left. Upon puck drop, Alec Hagaman and Caleb Cameron would drop the gloves, along with Mitch McPherson and Zach urban throwing down. McPherson and Urban would each be done for the night following the fight, dropping the Rivermen short of a forward and a defensemen with the aforementioned Smutek ejection.

The fights to conclude period one would bring momentum into the second stanza for Peoria, with the team rattling off four goals in succession. Jakob Reichert began the scoring while the team was shorthanded in the opening minute of the second. The 26-year-old slid his way past the defense to break in on Fotinos, beating the goaltender low for the 2-1 Rivermen advantage.

Another shorthanded chance came midway through the Period. Rivermen captain Alec Hagaman intercepted a puck and rushed down the left wing, feeding a backhand pass in front of the cage for Zach Nieminen to cash in his second goal of the night.

Peoria built themselves a three goal lead on Darren McCormick’s power play goal that came as a result of a rebound off the pads of Fotinos, giving the SPHL’s leading scorer his 7th of the season to make it a 4-1 game with a little over five minutes to play in the second.

Another penalty to the Mayhem allowed the Rivermen to put the nail in the coffin before the second frame expired. With Shawn Lynch serving a hooking minor, Jake Hamilton ripped a one-timer from atop the blue line through traffic, making it 5-1 before intermission.

Macon fired two goals past Levine in the third by way of Rene Hunter and Jimmy Soper, but the deficit was too large to overcome, helping the Rivermen hang on to remain undefeated. The clubs will engage in a rematch Saturday evening. The broadcast of the game can be heard at http://mixlr.com/peoria-rivermen/ ,starting with the pre-game show, at 5:45 p.m. CST.