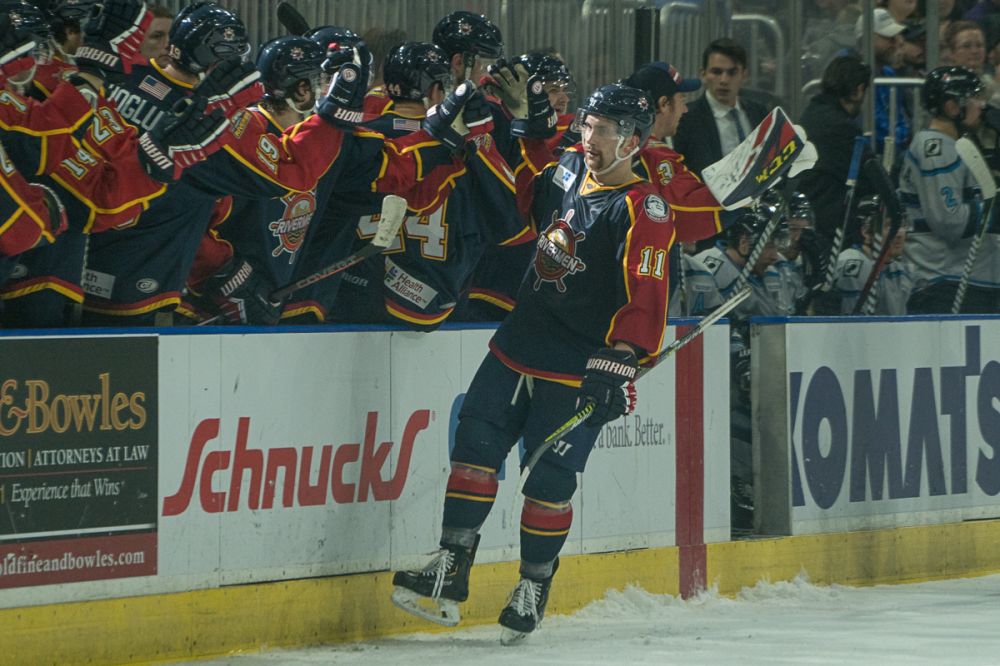 Hagman and Ernst with 3-point games propelling Rivermen to Victory

Peoria, IL – The Peoria Rivermen and Quad City Storm met for the second straight night, this time at Carver Arena in front of 3,667 fans. The Rivermen fell behind early, tied the game, then fell behind again before an explosion of goals in the game’s third period to best the Storm, 6-3. The Rivermen scored five unanswered goals on their way to victory; their 10th of the season. With the win over Quad City the Rivermen improve to 10-0-1, 21 points and sit atop the SPHL standings.

The Storm jumped out to a quick lead less than five minutes into the contest. Quad City winger Dalton Mills fired a shot just inside the blue line that found its way through traffic and was deflected by Dakota Klecha past Rivermen goaltender Jeremy Brodeur for the 1-0 edge.

The Rivermen evened the score just 12 seconds into the middle frame. Rivermen winger Robin Hoglund gathered a loose puck and slipped a pass to Alec Hagaman, who skated inside the left circle and snapped a shot, beating Storm goaltender Ryan Mulder to tie the game, 1-1.

Quad City regained the less than three minutes later, once again on a deflection. Storm winger Taylor Price fired a shot that was deflected by teammate Vincent Beaudry and past Brodeur for the 2-1 Storm lead at 3:03 of the second period.

The Storm added to their one goal lead near the mid-point of the period while on the powerplay. With Rivermen winger Cody Dion serving a tripping call, Storm center Tommy Tsicos fed a pass to Shane Bennett who snapped a shot from the right circle over the left shoulder of Brodeur at 9:07, putting Quad City up by two.

Peoria cut into the Storm lead with the middle frame winding down. Hagaman raced into the zone and slipped a pass across the top of the crease to a streaking Jordan Ernst who chipped the puck past Mulder to cut the Quad City lead to 3-2 at 16:50 of the second period. Ernst now has goals in three straight games.

The Rivermen evened the score prior to the mid-way point of the third period. Peoria center Jordan Carvalho fed a pass to Hagaman who was stationed in the left circle and fired a shot that sailed past Mulder to tie the game 3-3 at 8:13 of the third period.

The Rivermen gained their first lead of the contest and added two more goals en-route to victory. The game winning goal was scored while the home team was on the power play. With Pryce in the penalty box for slashing the Rivermen cycled the puck in their offensive zone. Ernst sent a drive towards the net that was tipped past Mulder by Carvalho for powerplay tally and  4-3 Rivermen edge at 11:41. Peoria sealed the win with a pair of goals towards the conclusion of the final period, the first from Ernst who took a feed from Dion and slid the puck past Mulder at 17:02 for the 5-3 Rivermen lead. The Rivermen sealed the deal with an empty net tally at 19:24 when Darren McCormick took a pass in the neutral zone and flicked a shot that meandered across the goal line for the eventual 6-3 final score.

Brodeur earned the victory between the pipes stopping 23 of 26 shots faced in the game. With the victory, Brodeur improves to 5-0-0 on the season.

Notes: With his empty net goal, McCormick extends his goal scoring streak to 10 games, becoming the second player in SPHL history to reach 10 consecutive games with a goal….The Rivermen trailed for the first time on home ice this season….Hagaman recorded his second consecutive multi-point game….Carvalho notched his first goal since 3/2 at Quad City….Ernst collected his first multi-goal game of the season….The Rivermen return to action next Friday night as they welcome the Huntsville Havoc to Carver Arena….The Rivermen will wear special Peanuts themed jerseys for the contest….Friday night’s game will also feature an appearance from Snoopy…Friday’s game gets started  at 7:15 p.m. CST….The broadcast of the game can be heard, at http://mixlr.com/peoria-rivermen/ starting with the pre-game show, at 7 p.m. CST.