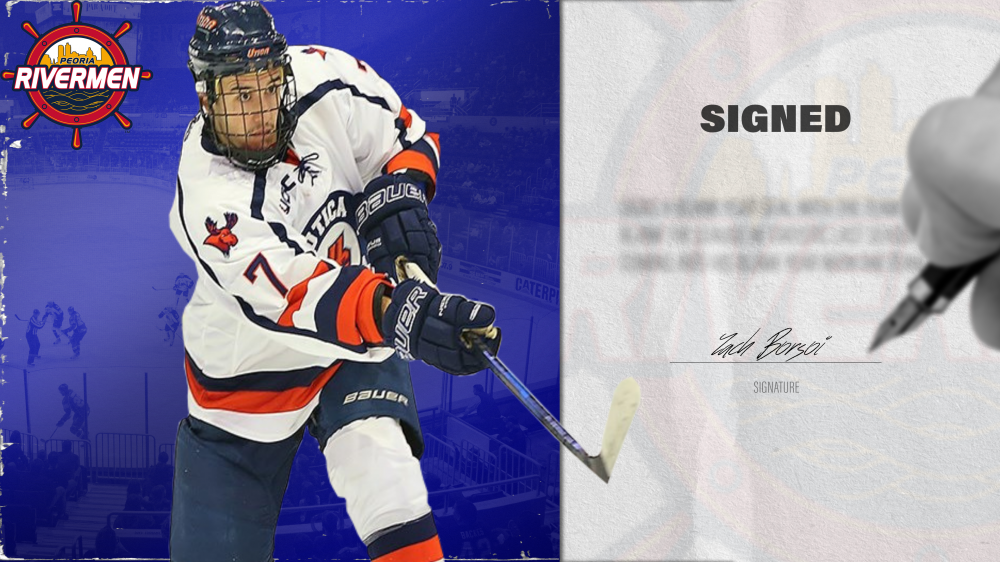 PEORIA, IL – The Peoria Rivermen announced today that the team has signed defenseman Zach Borsoi to a standard professional contract (SPC). The move comes after defenseman Theo Calvas was recalled to the ECHL, with the defender joining the Tulsa Oilers, ECHL affiliate of the Stanley Cup Champion-St. Louis Blues.

Calvas becomes the third Rivermen this season to get the call to the ECHL level, and the second to do so in less than a week, after Jakob Reichert was moved up to Fort Wayne. The 21-year-old Calvas skated in just two games with Peoria, earning two assists in the second game on the club’s weekend in Evansville. The 6’5”, 220lb. defender began his season in the ECHL, playing in a game for the Allen Americans. Calvas is the first defenseman to receive a call-up from head coach Jean-Guy Trudel’s group this season.

The subtraction of Calvas opens up a roster spot for 25-year-old Zach Borsoi. A Quebec City native, Borsoi brings identical size to that of Calvas, checking in at 6’4”,220lbs. His game developed at the NCAA-Division III level with Utica College, where Borsoi skated in 110 games, totaling 18 goals and 65 points. Borsoi won a championship with the Utica his junior year, and in the 2018-19 season, the senior wore a letter for his team. His play earned him UCHC Second Team All-Conference honors.

Borsoi has already joined the team and will be available for the Rivermen’s road game this Friday night at Quad City.