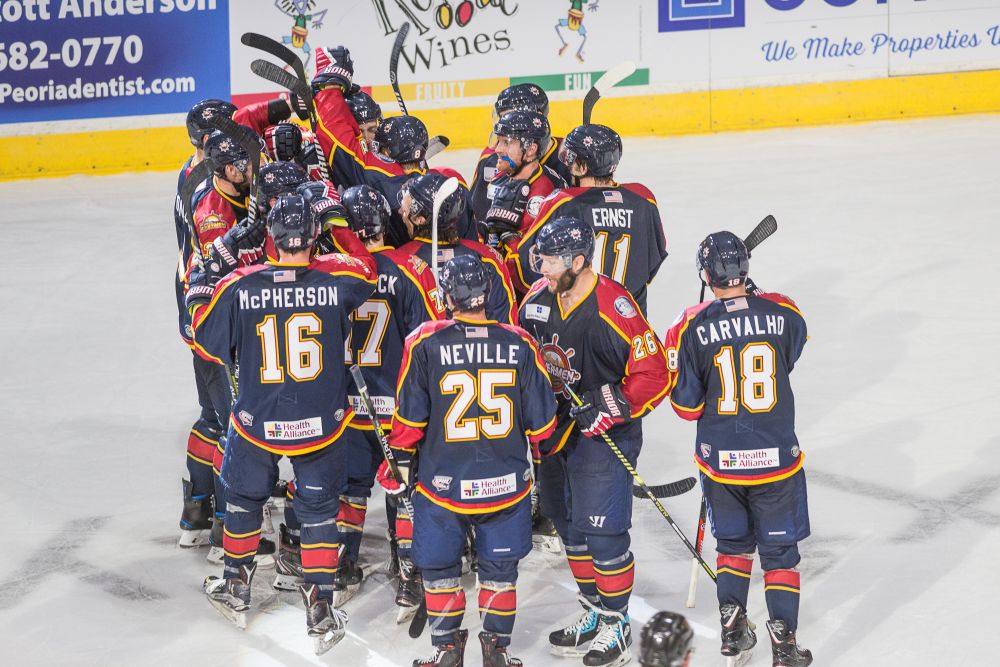 Evansville, IN- The Peoria Rivermen gained points yet again, but fell one short of keeping their perfect season in tact, dropping a 4-3 shootout to the Evansville Thunderbolts Friday night at the Ford Center.

Peoria failed to gain two points, despite leading the contest early by a 2-0 margin. Darren McCormick found the back of the net just 44 seconds in, driving a corner shot from behind the goal line off the back of Thunderbolts’ goalie Parker Gahagen’s skate. McCormick’s tally registers as his ninth of the year, and tied a career-best seven game goal streak for the first year Rivermen.

Peoria struck once more just shy of the midway point in period one. Jake Hamilton sprinted to the left point to keep a puck onside, flinging it toward the net. Zach Nieminen would catch the secondary chance from Hamilton’s shot, shooting one under the armpit of Gahagen for his third goal of the season.

A strong, three goal second period helped Evansville in their resurge. Just over 30 seconds into the middle frame, Rivermen goaltender Eric Levine got beat on a wraparound that was stuffed through by Taylor Makin. The puck went over the goal line by just a couple of inches before coming back out into the blue paint, but the shot was still a goal.

Less than three minutes later, another wraparound effort from Matthew Barnaby led to a number of saves needed for Levine as the puck continued to bobble around the front of the net, only until Austin Plevy cleaned up with a shot to beat Levine in-between the circles.

Kenton Helgesen scored 12:47 into the second on a bad angle bid that caught Levine by surprise. Evansville managed just seven shots in the second, and with the team having killed a penalty just moments earlier, Helgesen drove down the left wing boards before floating one through Levine, giving the Thunderbolts a 3-2 edge after 40 minutes.

Jean-Guy Trudel’s group responded from their difficult second period with an early goal in the third. Less than three minutes in, a couple of bounces in front led to Jakob Reichert snapping a top shelf shot, keeping his point streak alive with points in all eight game so far this season. The goal eventually forced overtime, where the Rivermen would get the better of the chances, outshooting the Thunderbolts, 4-1 in the extra frame, but the play of Gahagen in goal allowed Jeff Bes’ group to force a shootout.

With a tie in the shootout heading to round five, Austin Plevy beat Levine through the legs to force Peoria to score. Jake Henderson would be the do-or-die shooter, and converted on his low shot to force round six. Both coaches would go to the same players from the Previous round. Plevy struck again through the five-hole, but Henderson was denied by the glove of Gahagen, giving Evansville their first win at home against the Rivermen in 671 days.

Levine made 17 saves in the loss. Gahagen was credited for 24 saves. The Rivermen fell to 7-0-1, while Evansville improved to 3-5-1. The clubs will engage in a rematch Saturday night.