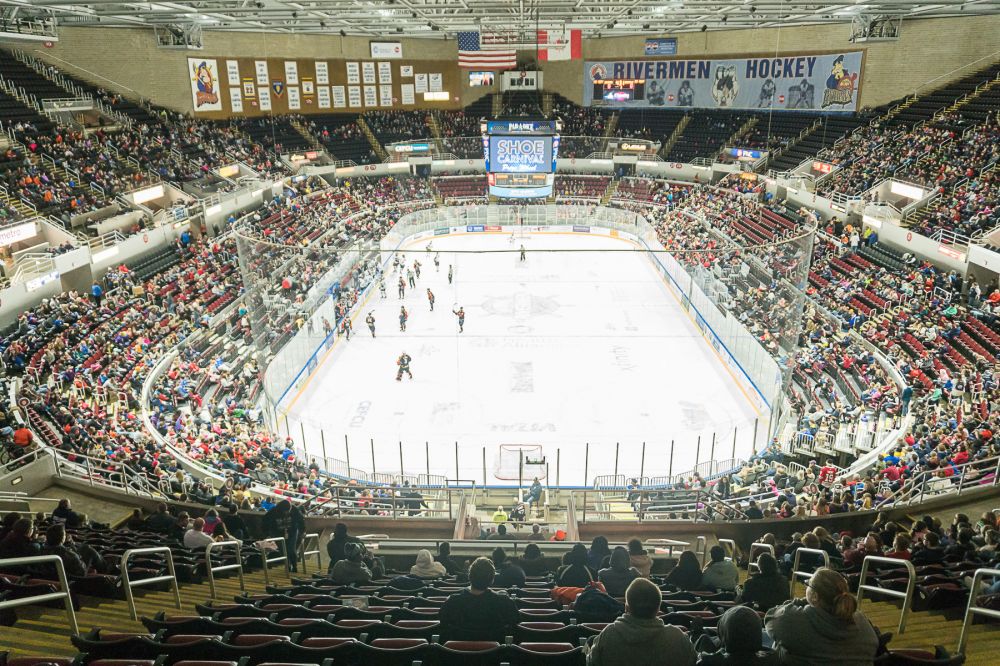 Baer’s two goals propel Rivermen to victory in front of 6,889

Peoria, IL – The Peoria Rivermen and Knoxville Ice Bears faced off for the one and only time at Carver Arena this season and didn’t disappoint the 6,000 plus students in attendance. After a scoreless opening period, Knoxville scored first, the Rivermen then tied the contest, and got the eventual game winner in the third to improve to 13-1-3 on the season. With the win, Peoria gains two standings points to maintain the top spot in the SPHL at 29 points; three ahead of Pensacola.

After a scoreless opening period, the Ice Bears broke the scoreless tie while on a powerplay. With Rivermen center Jordan Carvalho sitting for tripping, Knoxville cycled the puck in their offensive zone. Ice Bears winger Jacob Benson put a shot on goal that was initially turned aside by Eric Levine, but the puck kicked out to Bryce Neilson, who jammed one through the legs of Levine for the 1-0 advantage 8:48 into the middle frame.

The Rivermen evened the score just over a minute later. Robin Hoglund raced into the Rivermen zone and slipped the puck back to teammate Cody Dion who found Alec Baer atop the crease. Baer faked left, shifted right, then slid the puck past Knoxville goaltender Joseph Murdaca to tie the game 1-1 at 10:01 of the middle frame.

Peoria tallied the eventual game winner just past the midway point of the third period. Hoglund corralled a pass coming out of the Rivermen defensive zone and fed across the center ice logo to Baer who raced to a breakaway, finessing a shot past Murdaca for the 2-1 eventual final at 10:03 of the third period.

Levine earned the win in goal, stopping 26 of 27 shots faced. With the win, Levine improves to 8-0-3 on the season.

Notes: Baer collected his first career multi goal game with his two goal outing….Hoglund earned his first multi-point game assisting on both goals….Brandon McMartin has collected at least a point in his first four outings in a Rivermen uniform, he now has five points in those four outings….The Rivermen return to action Friday night as they travel to Moline, IL and face off against the Quad City Storm at the Tax Slayer Center…Puck drop for Saturday’s game is scheduled for  7:10 p.m. CST….The broadcast of the game can be heard at http://mixlr.com/peoria-rivermen/ starting with the pre-game show at 6:55 p.m. CST.