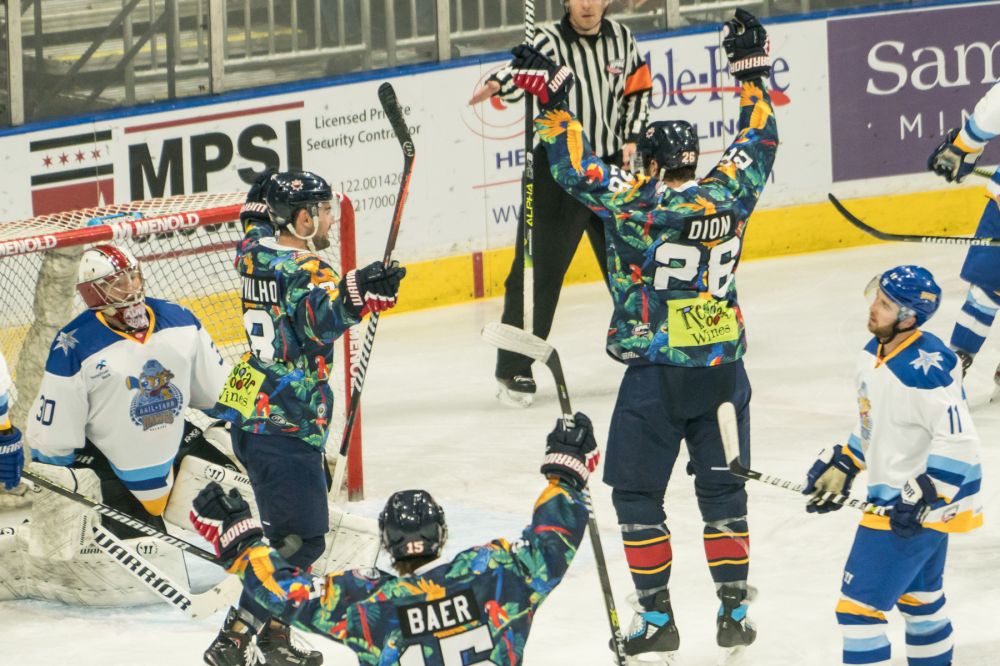 Peoria, IL – The Peoria Rivermen and Roanoke Rail Yard Dawgs battled for the second straight night, and the Rivermen once again came out on top by a 5-2 final score. The Rivermen had five different goal scorers on the night, and Alec Baer earned a three-point game as the Rivermen cruised to victory in front of 2,889 at Carver Arena. The win improves the Rivermen to 16-2-3 on the season and keeps them atop the SPHL standings.

Roanoke wasted no time getting on the board as Austin Daae pounced on a rebound off an initial shot from teammate CJ Stubbs. Stubbs fired a point-blank shot that was turned aside by Rivermen goaltender Eric Levine. The puck trickled atop the crease where Daae popped the rebound past a sprawling Levine for the 1-0 Rail Yard Dawgs lead at 5:19 of the opening frame.

The Rivermen tied the game, and eventually grabbed the lead in the ladder stages of the first period. The first goal came while Roanoke winger Bobby Watson was serving a penalty for illegal head contact. Rivermen winger Jordan Carvalho gathered the puck at the left post and fed a pass across the crease to Cody Dion, who promptly hammered the puck past Roanoke goaltender Ian Sylves to tie the game, 1-1 at 7:53 of the first stanza.

Peoria grabbed the lead in the closing stages of the period when Alec Baer collected a puck at center ice, raced into the Rivermen offensive zone and cranked a wrist shot from the right circle that scaled past Sylves for the 2-1 Rivermen edge at 15:21 of the first.

The Rivermen added to their lead just over a minute into the middle stanza, when Baer raced into the zone and tried to slide a pass to teammate Robin Hoglund, but the puck slid past the goal line and to the end boards. Baer picked up the puck and sent a backhand pass out front to Hoglund, who had an empty net to shoot at while Sylves was out of position for the 3-1 Rivermen advantage at 1:43 of the second period.

Roanoke cut into the Rivermen lead just over five minutes later when Matt O’Dea collected a pass in at the top of the right circle from teammate Kyle Gonzales, O’Dea fired a shot that deflected off the leg of a sliding Rivermen defenseman Skyler Smutek and over the right shoulder of Levine to cut the Rivermen lead to 3-2 at 6:02 of the middle frame.

Levine earned the win between the pipes, his third consecutive, stopping 29 of 31 shots faced on the night. With the win, Levine improves to 11-0-3 on the season.

Notes: Baer collected his first career three point night with a goal and two assists….Cody Dion has a three game goal scoring streak dating back to 12/21 vs Quad City….Robin Hoglund collected his first goal in 14 days, his last was 12/14 at Evansville….With his empty net goal, Kyle Moore has his first goal in a Rivermen uniform….The Rivermen return to action Tuesday as the hit the road to Moline, IL for an afternoon contest against the Quad City Storm… ….Puck drop for Tuesday’s game is scheduled for  4:00 p.m. CST….The broadcast of the game can be heard, at http://mixlr.com/peoria-rivermen/ starting with the pre-game show, at 3:45 p.m. CST.