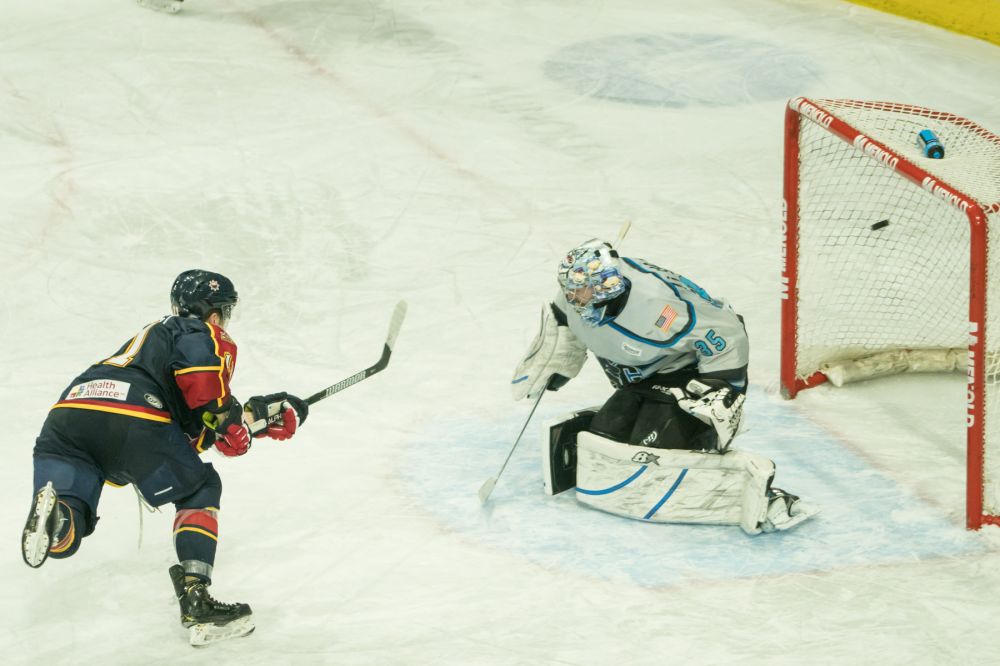 Peoria, IL – Jordan Ernst scored the game-winning-goal in a shootout. To lift Peoria to a 3-2 win over Quad City in front of 4,887 fans at Carver Arena with the Stanley Cup® in attendance. The teams skated a scoreless overtime session before the Rivermen scored twice in the shootout to give the home team their 14th victory of the season, improving Peoria to 14-2-3 on the season and their 31 points keeps the team on top of the SPHL standings.

The Rivermen struck first on a pair of first period goals inside the six minute mark. The first goal came when Rivermen winger Alec Hagaman took a pass along the boards from Kyle Moore. Hagaman then circled through the zone and into the high slot where he snapped a shot that beat Storm goaltender Ryan Mulder for the 1-0 Rivermen lead at 5:01 of the first. Peoria struck again just 33 seconds later when Cody Dion took a feed and raced into the offensive zone, got to the right circle and hammered a shot that beat Mulder for the 2-0 Rivermen edge at 5:34 of the opening period. After being beat twice on five shots, Storm head coach Dave Pszenyczny pulled Ryan Mulder in favor of Peter Di Salvo.

After a scoreless middle frame, the Quad City Storm struck with a pair of goals in the final period. Their first goal came less than eight minutes into the third, when Storm captain Dean Yakura found Michael Casale in the right circle. Casale fired a shot over the glove of Rivermen goaltender Eric Levine, cutting the deficit in half.

Quad City drew the score even less than three minutes later when Tucker Ross collected a puck quickly following a faceoff and fired a shot from just inside the blue line that found the back of the net to even the score, 2-2 at 15:51 of the period.

After a scoreless overtime session, the teams embarked on a shootout. Peoria struck first as Jakob Reichert beat Peter Di Salvo in the first round of the shootout. Then, in the fourth round, Peoria got the eventual winner from Jordan Ernst. Ernst skated in with the puck and used some nifty stick work to deke Di Salvo and deposit the puck into the net for the game winning goal.

Levine earned the victory in goal, stopping 20 of 22 shots and going 4-5 in the sudden death session. With the win, he improves to 9-0-3 on the season.

Notes: Levine has not suffered a regulation loss in SPHL play in a calendar year, his last regulation loss came 12/21/18 vs Peoria with the Quad City Storm….The Rivermen chased Storm starting goaltender Ryan Mulder 5:34 into the game when they scored two goals in a span of 33 seconds….Quad City has never beaten the Rivermen at Carver Arena in the SPHL era….The Rivermen return to action next Friday and Saturday night as they welcome the Roanoke Rail yard Dawgs to Carver Arena…Friday night is Rivermen Calendar night, the first 2,500 fans will receive a 2020 Rivermen calendar….Puck drop for Friday’s game is scheduled for  7:15 p.m. CST….The broadcast of the game can be heard, at http://mixlr.com/peoria-rivermen/ starting with the pre-game show, at 7:00 p.m. CST.