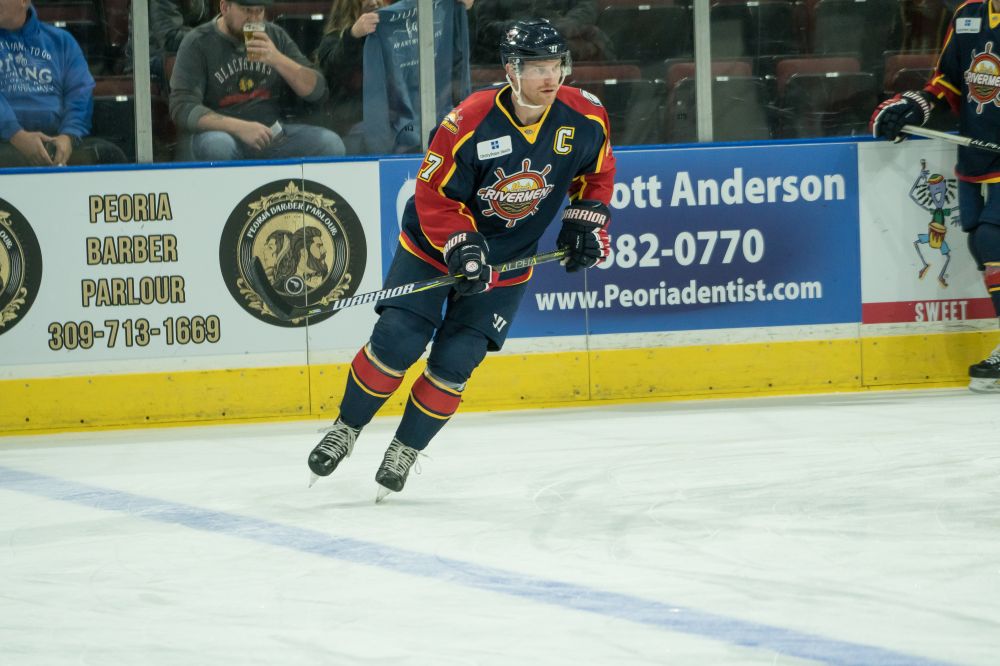 Moline, IL – Alec Hagaman tipped a shot into the Quad City net with 43 seconds left in regulation, breaking a 2-2 tie to give the Peoria Rivermen a 3-2 win on the road against the Storm. The goal extends Hagaman’s personal best goal streak to eight games, in turn helping the Rivermen improve to 19-3-3 on the season, while the Storm fall to 8-12-6 on the season.

Eric Levine earned the win in net with 30 saves for Peoria. The Rivermen net minder is 14-0-3 on the season. Peter Di Salvo took the loss for the Storm with a 28 save performance.

Both teams exchanged one goal a piece in the first and second periods. For the Rivermen, it was Jordan Ernst just 16 seconds into a power play to get the scoring started. With Quad City’s Cody Walsh in the box for tripping, Ernst set up in his usual spot for a one timer inside the right circle, whistling past Di Salvo for the 1-0 Peoria advantage 6:07 into the game.

The Storm responded at the 13:44 mark of the first. Alec Hagaman was concluding his time in the penalty box while serving a holding minor. While in the box, the Storm failed to generate much opportunities on the power play, until a late breakout up the ice formed, giving Connor Fries the opportunity to get in the attacking zone and fire a wrist shot over the blocker side of Levine just as Hagaman exited the box to knot the game up.

Peoria would regain the lead in the middle frame, thanks to a hard working play by Mitch McPherson, Robin Hoglund, and Zach Nieminen. With the puck in deep, McPherson put a shot on goal that Di Salvo stopped, however the rebound kicked to Hoglund, who fed the puck through the crease for Nieminen to score his 6th goal of the season and first in 15 games.

Later in the second, veteran blue liner Joe Sova chased a puck that was bouncing in Levine’s crease to tap home the tying goal to make it 2-2. The third period gave both clubs chances, but with time winding down, it seemed inevitable the teams would need overtime to decide the game.

Instead, Alec Hagaman cashed in on a last minute opportunity. With 43 seconds left, Hagaman crashed the net, leaving his stick available for Cody Dion. From the left wing boards, Dion shot the puck towards Di Salvo, with the puck catching Hagaman’s stick for a redirect that got through the Storm net minder to serve as the game-winning-goal for Peoria, and Hagaman’s team leading 14th goal of the season.

The Rivermen conclude their five game road trip with another contest in Quad City, Saturday inside the TaxSlayer Center, beginning at 7:10 p.m. puck drop. Fans can catch the audio broadcast of the game live at http://mixlr.com/peoria-rivermen/ , starting with the pre-game show at 6:55 p.m. CST.