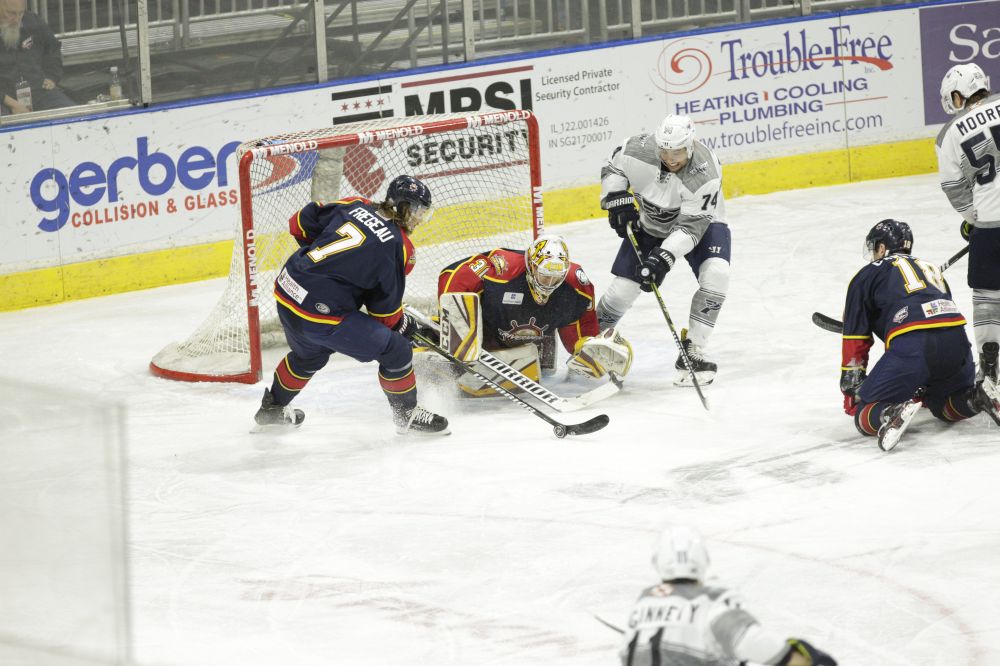 Peoria, IL – The Peoria Rivermen and Pensacola Ice Flyers battled to a shootout for the second time in their three games in four-day series, with Peoria taking the rubber match by a 3-2 final in a shootout. The Rivermen got goals from Alec Hagaman, Alec Baer, and the game winner from Zach Nieminen securing four standings points on the weekend. With the win, the Rivermen improve to 21-4-3 on the season and remain at the top of the SPHL standings. Pensacola earns a standings point, with their record now at 18-5-5.

The Rivermen wasted no time getting on the scoreboard, striking just 14 seconds after the opening draw. Rivermen center Jordan Carvalho won the opening draw and shifted the puck to Nick Neville, Neville slipped the puck to Skyler Smutek who found a streaking Alec Hagaman racing through the neutral zone and into the attacking zone. Hagaman skated into the right circle and snapped a shot that zipped by Ice Flyers’ goaltender Stephen Klein for the quick 1-0 edge at :14 of the opening period.

Pensacola evened the score prior to the midway point of the middle stanza while skating shorthanded. With Blake Young serving a slashing and continuing altercation penalty Ice Flyers center Brett D’Andrea forced Jordan Ernst to fumble the puck in his own end and quickly shot it through Rivermen goaltender Ryland Pashovitz to tie the game, 1-1 at 8:01 of the second period.

The Rivermen regained the lead in the third period when Alec Baer collected the puck in the neutral zone and skated across the blue line, darted towards the right circle and drilled a wrist shot that beat Klein on the glove side for the 2-1 Rivermen advantage at 7:46 of the third period.

The Ice Flyers once again tied the contest in the late stages of the final period. Garrett Milan collected a loose puck in the Pensacola zone and fired a shot from the left circle that flew over the shoulder of Pashovitz and into the back of the net to knot the score, 2-2 at 14:26 of the third frame.

The game would continue through a three-on-three overtime session where neither team could solve the opposing goaltenders. After the five-minute extra session, the score remained 2-2 and the game descended into a shootout.

Baer broke through for the Rivermen in the second round before Pensacola eventually tied the shootout at one when Patrick Megannety slipped the puck past Pashovitz. The Rivermen got the eventual game winner in the fourth round from Zach Nieminen, as he snapped the puck past Klein for the 3-2 shootout victory.

Pashovitz earned the win between the pipes, stopping 23 of 25 shots faced, including two in the overtime session. With the win, Pashovitz improves to 3-0-1 on the season and 2-0-0 in a Rivermen uniform.

Notes: With his first period goal, Captain Alec Hagaman has 100 career regular season goals, along with the milestone goal, Hagaman also has also collected a point in 12 consecutive games….The Rivermen return to action Friday night as they welcome the Macon Mayhem to Carver Arena for a pair of games….Puck drop for Friday’s game is scheduled for  7:15 p.m. CST….The broadcast of the game can be heard, at http://mixlr.com/peoria-rivermen/ starting with the pre-game show, at 7:00 p.m. CST.