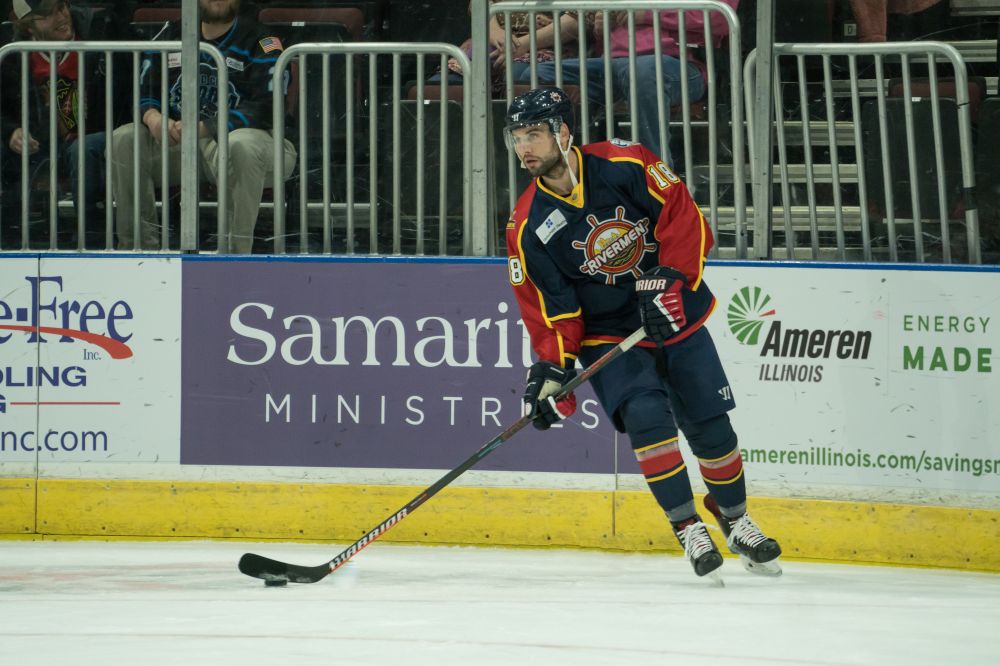 Evansville, IN – Brandon Lubin and Seth Swenson scored for Evansville, while the Rivermen registered a season-high 45 shots on goal, but were blanked nonetheless by Brian Billett in a 2-0 final at Ford Center Friday night.

The loss moves Peoria to 25-5-3, while Evansville’s third straight win gives them a 19-12-5 record. Brian Billett earned his first shutout of the season, thus bumping his numbers to 5-2-2. Eric Levine took the loss for Peoria, making him 17-2-3 on the season.

The first period favored the Rivermen in both shots and power plays. Jean-Guy Trudel’s group outshot Evansville, 19-10, and earned four power plays in the frame. While Evansville had just one man advantage in the first, it proved to be the difference maker. With Robin Hoglund in the box for tripping, the Thunderbolts set up in the attacking zone and finished with SPHL leading scorer, Austin Plevy, sending a pass toward the center of the blue line for Brandon Lubin to unload a one-timer. The shot rang off the left post, but ricocheted off Levine and into the goal, making it 1-0 Thunderbolts 7:28 in.

Evansville’s middle period was their best, and it proved true when the club got a late goal in the frame to make it 2-0. Derek Sutliffe did all the work, weaving his way around the perimeter of the ice to eventually attempt a wraparound on Levine. His curling try reached a piece of Swenson on the far side of the goal, however, allowing Swenson to tuck the puck into the cage.

Peoria made a strong push in the final period, outshooting the home team, 18-5 in the period. The largest opportunity to climb back in the contest came in the dying minutes. After Noah Corson was assessed a double-minor for roughing, coach Trudel elected to pull Levine in favor of a six-on-four opportunity with 1:50 to play. Seconds later as play resumed, Thunderbolts’ defenseman Kyle Thacker cleared the puck out of play for a delay of game, giving the Rivermen a three man advantage with over 90 seconds left, but the play of Billett and the Evansville blue line kept the score status quo, handing Peoria its fifth regulation loss of the season, and second shutout against of the 2019-20 campaign.

Up next for the Rivermen comes a trip to Knoxville, TN for a pair of games with the Ice Bears to wrap up the weekend. Puck drop for Saturday’s game is scheduled for 6:35 p.m. CST….The broadcast of the game can be heard, at http://mixlr.com/peoria-rivermen/ starting with the pre-game show, at 6:15 p.m. CST.