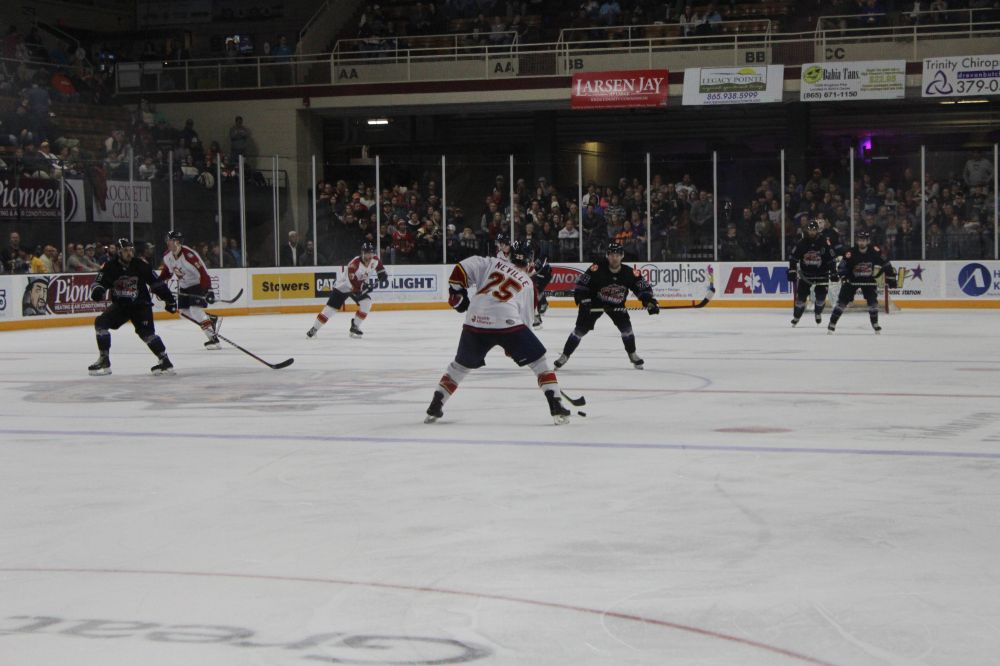 Knoxville, TN – Despite a hard effort from the Rivermen by putting 40 shots on goal, a three goal, first period for Knoxville helped the Ice Bears take the first of two meetings on the weekend over Peoria by a 5-2 decision.

Ryland Pashovitz took the crease for Peoria and suffered his first loss with the team while making 17 saves. Joe Murdaca took the win for the Ice Bears with a 38 save performance. The loss gives Peoria its first set of back-to-back regulation losses this season, with the team dropping to 25-6-3. Knoxville improved to 21-15-3 with the win.

In front of a sold out crowd at Knoxville Civic Coliseum, the Rivermen and Ice Bears began the game with noticeable energy. Jake Hamilton and Skyler Smutek each dropped the gloves, taking fights with Dwyer Tschantz and Brian Bachnak respectively. Peoria would strike first in an effort to quiet the crowd. Defenseman Skyler Smutek took a puck from the right wing and carried it toward the Knoxville net. With Murdaca collapsing in his net, a loose puck was collected by Carvalho and tucked in the goal for the 1-0 advantage over seven minutes in.

Knoxville would begin their surge later in the period with two goals in 57 seconds. The first belonged to Lucas Bombardier, who tipped a deep slot drive from Jason Price through Pashovitz to knot the game at one.

Shortly after, Paul Fregeau was flagged down for hooking, giving Knoxville one of its four power plays in the first Fram alone. A quick transition through the neutral zone, then followed by crossing the Rivermen line and slinging a wrist shot by Pashovitz on the glove side, making it 2-1.

A deflating goal hurt Peoria in the dying seconds of the first. With 7.2 seconds left, Ben Oskroba lost the puck in front of his own net. Tschantz picked it up in Knoxville colors and pushed one into the net, giving the Ice Bears a 3-1 lead after 20 minutes.

The second period started slower than the first, but picked up in the latter stages. After Alec Hagaman drew a penalty, the Rivermen went to the power play with barely over four minutes left in the frame. Several chances went toward the net of Murdaca, including an Alec Baer wrist shot that rang off the right post.

Just over a minute after the Rivermen power play ended, a fortuitous bounce the other way allowed Brian Bachnak to trickle one by Pashovitz for the 4-1 lead with 1:22 left in the second.

Alec Hagaman converted for his 19th goal of the season near the midway point of period three. Carvalho found Hagaman racing into the slot, where the captain tucked a backhand goal by Murdaca, giving Peoria life. The goal gave Hagaman goals in 13 of his last 16 games.

Unfortunately, the captain would be responsible for the final goal in the game as well. With the net empty, Hagaman stood in center ice and sent a drop pass toward Jordan Ernst, but the pass failed to connect and the puck was sent into the vacant Rivermen goal, making the final score 5-2.

The Rivermen conclude their three-in-three with a Sunday matinee against the Ice Bears. Puck drop for Sunday’s game is scheduled for 2:05 p.m. CST….The broadcast of the game can be heard, at http://mixlr.com/peoria-rivermen/ starting with the pre-game show, at 1:45 p.m. CST.