Levine, Rivermen Hold on For 2-1 Win Against Storm 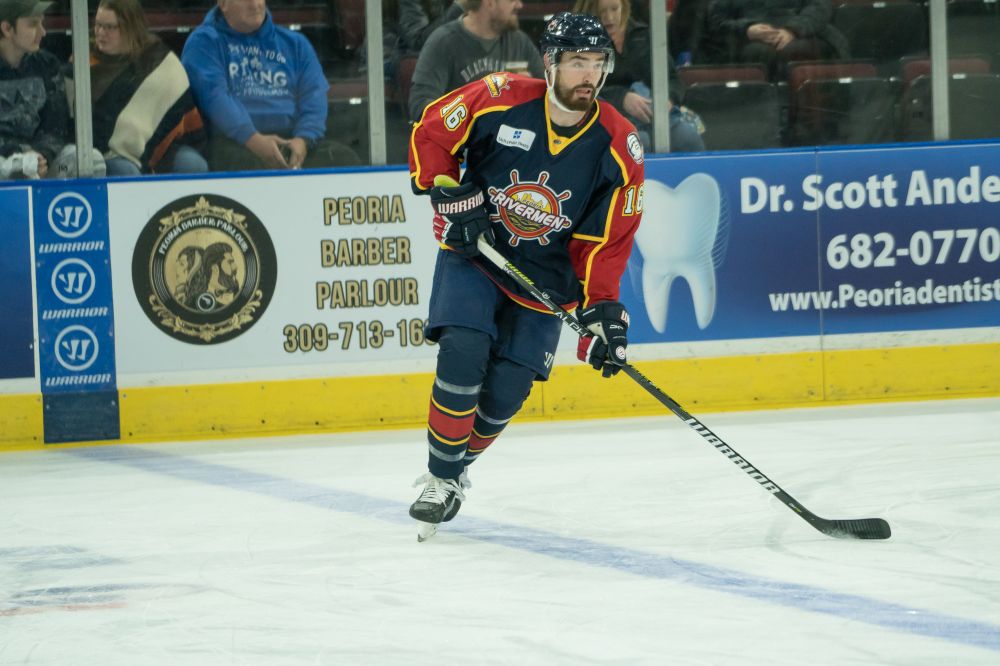 Levine, Rivermen Hold on For 2-1 Win Against Storm

Moline, IL – Nick Neville and Mitch McPherson cashed in on power play goals less than 30 seconds apart, while Eric Levine made 29 saves for the Rivermen to complete a weekend sweep on the road against Quad City via a 2-1 final at TaxSlayer Center Saturday night.

A storyline heading into the contest was Peoria’s power play, which had gone just one for its last 18 over a six game stretch. That funk was broken out of in a critical moment during the first period. Storm captain, Dean Yakura was guilty of high-sticking Alec Baer, but the Rivermen maintained possession on what was a delayed penalty. During that stretch in time, Ryan Devine was guilty of kneeing Robin Hoglund. This gave the visiting Rivermen a full two minute five-on-three power play.

58 seconds into the two man advantage, Alec Hagaman carried the puck up to the deep slot before dropping it off to Nick Neville, who slammed a one-timer from the left circle past Di Salvo, giving the Rivermen a 1-0 edge 10:59 into the contest. The goal was Neville’s third in as many games, and the defender extends his career best point streak to six games.

Less than half a minute later with a five-on-four chance, Brandon Rumble towed the blue line before sending a wrist shot toward Di Salvo that was tipped in front by Mitch McPherson, giving the Rivermen a two goal lead just as they had a night earlier.

Quad City’s lone tally came just three seconds after Hoglund left the box for a too many men on the ice penalty in the second period. Dakota Klecha raced into the slot to fling the puck over Levine’s shoulder, cutting the Storm deficit to one.

The Storm failed to convert on six power plays Saturday, and went 0-for-11 on the weekend. Levine made a number of quality stops, including a quick reacting save in the dying seconds of the middle period on Taylor Pryce. The final 1:20 of the game saw Di Salvo out of goal, and though the Storm through a series of shots toward Levine with the extra attacker on, the veteran goaltender stood tall to earn the victory.

Up next for the Rivermen comes the beginning of the team’s first true three-in-three of the season, starting with a single game Friday night in Evansville against the Thunderbolts….Puck drop for Friday’s game is scheduled for  7:15 p.m. CST….The broadcast of the game can be heard, at http://mixlr.com/peoria-rivermen/ starting with the pre-game show, at 7:00 p.m. CST.