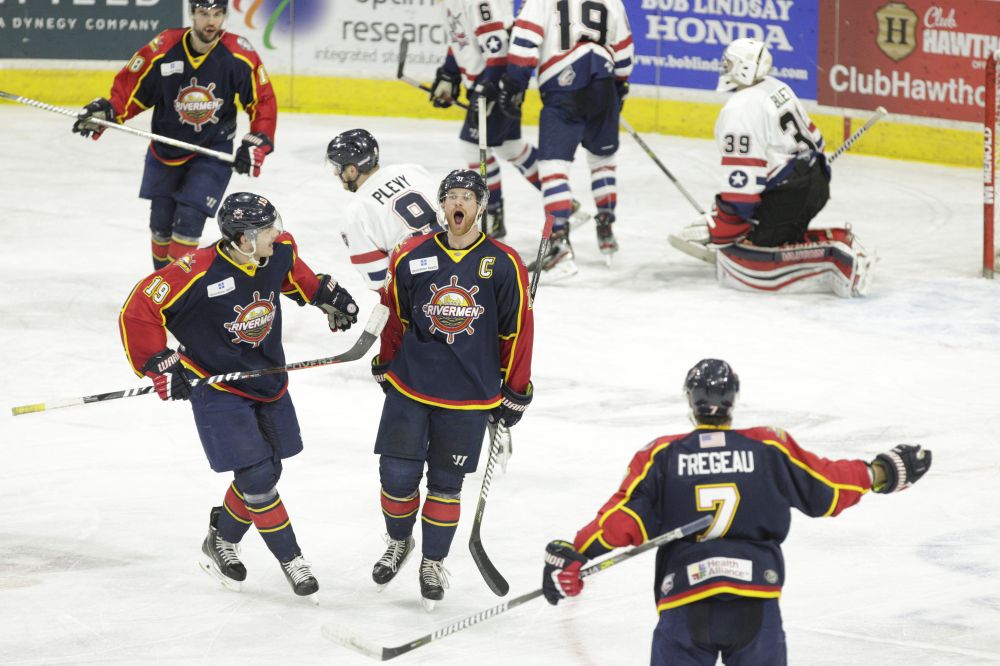 Peoria racks up 72 penalty minutes in series finale with Evansville

Peoria, IL – A combined 139 penalty minutes were handed to Peoria and Evansville, but goals from Zach Nieminen and Jordan Ernst helped the Rivermen take the weekend series with the Thunderbolts Sunday evening.

The Rivermen improve to 28-6-4, maintaining the top seed in the SPHL with 60 points. Evansville sits sixth in the league with a 21-14-5 mark. The Rivermen have 18 games left in their season and continue to near securing a playoff spot. The club’s magic number in order to secure a playoff berth is seven points.

Sunday brought with it another quick start from the Rivermen, who got out to an early lead. With Braden Hellems skating behind his own net, the defender coughed the Thunderbolts blue liner lost the puck on the start of a break out, leaving it for Zach Nieminen in the low, left circle to rifle a wrist shot by Ostepchuk, making it 1-0 just over three minutes in.

At the 6:26 mark of the first, chaos ensued down at ice level. Taking exception to a boarding play from Stanislav Dzakhov on Jordan Carvalho, Rivermen captain Alec Hagaman initiated a fight with the Evansville forward. Moments later before the next faceoff, Ben Oskroba would trade punches with Braedyn Asselstine, meaning both players would be ejected on account of the second fight after a whistle.

In the second, Jordan Ernst would find Dzakhov for another fight, the first of Ernst’s career, coming after the Evansville forward laid into Johan Hoglund. Paul Fregeau and Kyle Thacker would also fight in the second period. Another ejection would come Peoria’s way when during the Fregeau-Thacker scrum, Mitch McPherson earned a fight and aggressor penalty by attacking Evansville’s Zane Jones. Rivermen coach Jean-Guy Trudel would plea his case for the penalties, but Trudel would continue to contest the calls, earning him an abuse of officials call and ejection from the game.

The Rivermen would capitalize with penalties called toward the end of the second, resulting in a two man advantage that trickled into the third. Just 28 seconds into the frame, Jordan Ernst hammered a deep slot drive that got through Ostepchuk for the 2-1 edge that would eventually be the final score.

NOTES: The Rivermen killed six of seven penalties in the game, while converting on the man advantage for the second straight game. The team also has points in four straight games. Defenseman Skyler Smutek was involved in a third period fight with Noah Corson that ended with Smutek hitting the ice and was unable to return to the game. He will be evaluated prior to the next Rivermen game. Peoria hits the road for a three-in-three with the Roanoke Rail Yard Dawgs, beginning Thursday night with a 6 p.m. puck drop in the Berglund Center. The broadcast of the game can be heard, at http://mixlr.com/peoria-rivermen/ starting with the pre-game show at 5:45 p.m. CST.