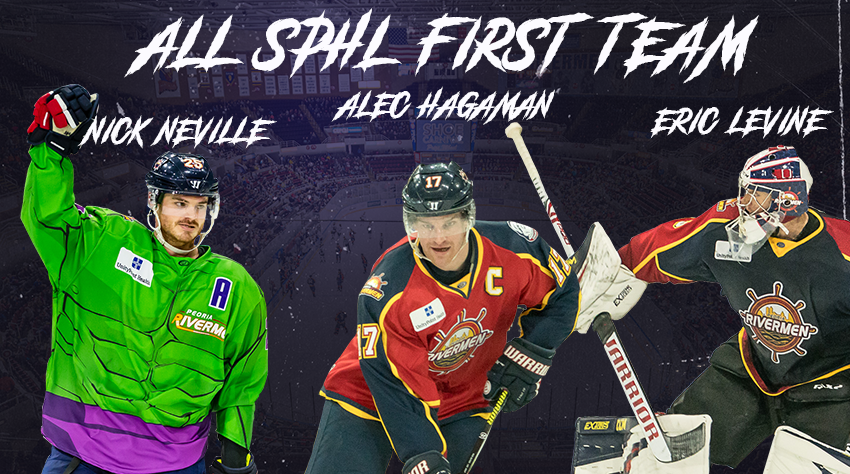 Rivermen are only SPHL team with multiple First Team representatives

It is the first time in franchise history that the Rivermen have earned three of the six selections for the All-SPHL First Team, and the second time multiple Rivermen have been named to the team. Last time was the 2017-18 awards, where Alec Hagaman and Dave Pszenyczny (now Head Coach of Quad City Storm) were both given First Team honors.

Hagaman earns his second First Team honors of his career. The sixth year pro captained Peoria to another first place finish in the shortened 2019-2020 SPHL season. Hagaman finished the year with 23 goals and 52 points across 44 regular season games. His season was highlighted by a hat trick against Roanoke in December, and a career-best eight game goal streak at the turn of the calendar.

After earning second team honors a season ago, Nick Neville led all SPHL defenseman in points with 35 through 46 games. The Bloomfield Hills, MI native was one of just two Rivermen players to skate in every game this season (Mitch McPherson was the other). Additionally, Neville had the second-best +/- among SPHL blue liners with a +21 rating.

Eric Levine earned his first All-Team honors by compiling 22 wins in 31 games played. With a 22-4-4 mark on the season, Levine pitched 4 shutouts to go with a 2.07 goals against average (GAA) and a .928 save percentage. Levine led the SPHL in GAA, save percentage, and wins.