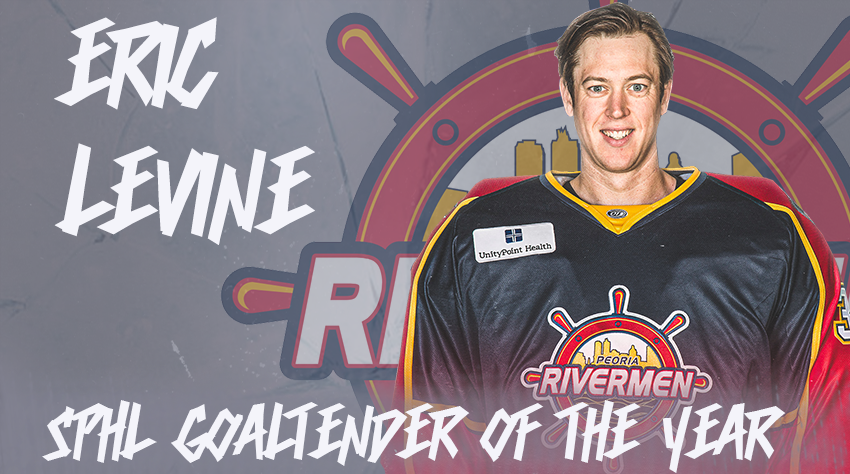 Rivermen starter led SPHL in wins, goals against average, and save percentage

Peoria, IL – On Wednesday afternoon, the Southern Professional Hockey League (SPHL) announced that Rivermen goaltender Eric Levine has been named SPHL Goaltender of the Year, as voted on by players, coaches, and media across the league.

Levine, 31, entered his seventh pro season at the start of the 2019-20 campaign. He spent all year with Peoria, where the Illinois native posted a 22-4-4 record across 31 games. Levine led all net minders with a 2.07 goals against average (GAA) and a .928 save percentage. Additionally, Eric posted four shutouts and had a career-best seven game win streak from December-January.

Levine is the second goaltender in franchise history to be the SPHL goaltender of the year recipient. Kyle Rank won the award in both the 13-14 and 15-16 seasons.

“It’s a very humbling award, but truthfully the award is not indicative of my play,” said Levine. “It’s for the team. It was team defense and a total buy in and I was a byproduct of a great system that was put in place by our coach (Jean-Guy Trudel) and executed. You have to have the right pieces in the right place at the right time. We had that. This was the best team I was ever with. No question."

The 2019-20 season was Levine’s fourth stint in Peoria. The veteran goaltender has made numerous stops in the ECHL throughout his career, which includes a Kelly Cup Championship with the Newfoundland Growlers a season ago. Levine has taken the crease for 93 career SPHL games and has a record of 50-25-11.