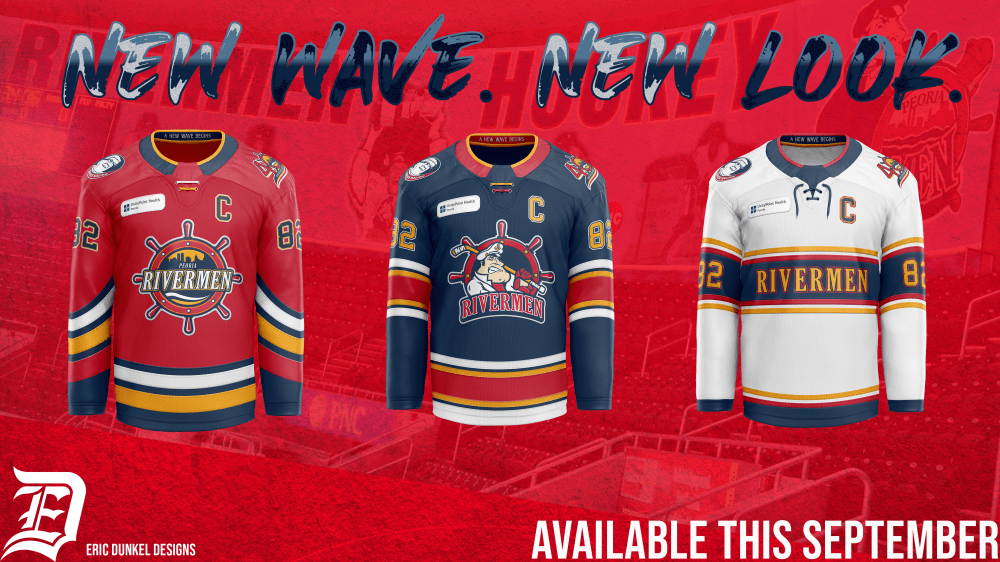 Peoria, IL – The Peoria Rivermen continued preparations for the 2021-22 SPHL season Saturday, unveiling three new, unique jersey designs that will be worn during the upcoming campaign. Though traditional in Rivermen colors (red, navy blue, white), these jerseys include several new features, most notably the new logos revealed earlier this offseason, along with a heritage style jersey featuring the team name striped along the center.

“We are excited to showcase the remaining piece of our rebranding for the upcoming 2021-22 season with our three new jerseys,” said Rivermen Owner/COO Bart Rogers. “We set out with the goal of presenting an entirely different look and feel for each jersey, from coloring, to logos, to patterns. We’re thrilled with the finished product.”

This jersey reveal bookends the six month process of remodeling the Peoria Rivermen brand ahead of its celebratory season, marking 40 years of professional hockey in Peoria. The organization collaborated with third part designer-Eric Dunkel, who brought concepts to reality with each jersey design and its accompanied features.

“I think Erik (Dunkel) from Dunkel Design and our staff scored a hat trick in these three new looks,” said Rogers. “Fans will enjoy seeing their favorite team and players take the ice with a new look this year, while also getting the opportunity to purchase all three jerseys to wear themselves for games at Carver Arena starting this fall.”

All new jerseys are expected to go on sale this September. An official date along with prices have yet to be determined. Stay tuned to all Rivermen social media channels for updates.