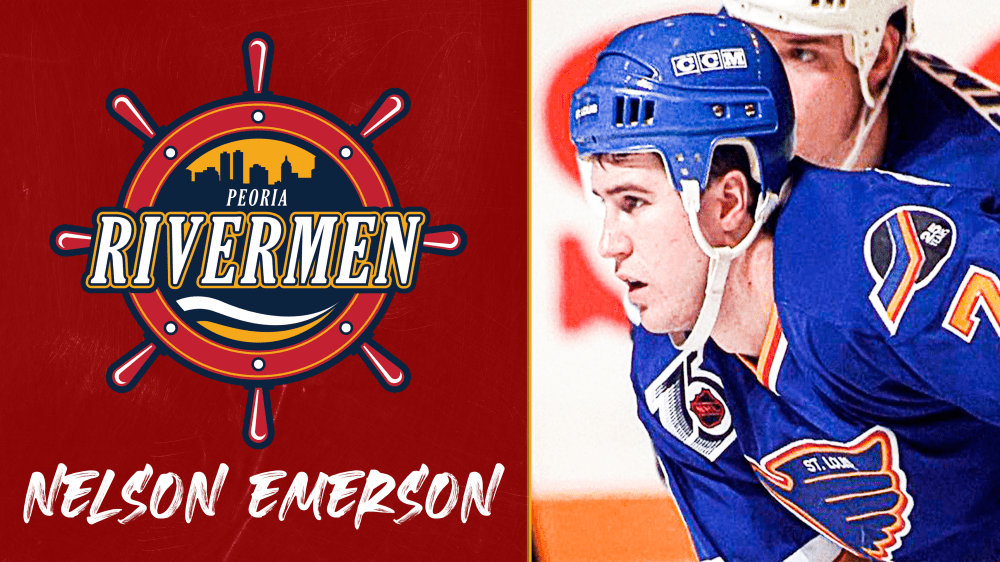 ’96 Rivermen Hall of Famers reflects on magical season in Peoria

Peoria, IL – Over 800 NHL games played. 510 points, including 22 in the Stanley Cup Playoffs. Two Stanley Cups as a Director of Player Development. Nelson Emerson achieved his ultimate goal of being an NHL player, and had a dream fulfilled by seeing his name engraved on this sport’s ultimate prize. Before then, however, he was just a kid in his early 20’s preparing for his first professional hockey game in Peoria, Illinois.

While it’s been 31 years since that 1990-91 IHL season, fans still have fond memories of so many players from what’s considered to be Peoria’s greatest hockey team, and perhaps the most talented hockey team in minor league history. Among those players is Nelson Emerson. The Canadian winger skated in his only full season of minor league hockey with the Rivermen in ’90-91, amassing 115 points in 73 regular season games. That ranks 4th all time for points in a single season by a Rivermen player. His torrent numbers extended into the playoffs, tallying 21 points in 17 games before hoisting a Turner Cup with his teammates to cap off the most dominant season in Rivermen history.

Though being credited with just one full season, Emerson made his debut a year earlier, skating in three games with Peoria following his senior year at Bowling Green State University.

“It was really important to get those couple of games under my belt,” Emerson mentioned. “Even though it was a short period of time, that helped me get to know the guys, see the level of play the IHL was at, and be prepared for the full season that fall.”

Along with getting to know the players, Emerson also took in the chance to get a feel for the city he would soon call home. It was a new, yet welcoming area for a kid who grew up in Hamilton, ONT.

“Peoria really wasn’t all that different from home,” said Emerson. “I really enjoyed the mid-west. I think everybody does. People were just down to Earth and it’s not a super metropolitan area. Just easy going people and that made it easy to get comfortable playing there.”

Emerson certainly appeared comfortable. A 3rd round pick of the St. Louis Blues, the rookie forward had an opportunity to skate for Peoria’s parent club in training camp, then again during a four game stint in the ’90-91 campaign. The promotion was earned as a result of a sensational season to that point, but even the lure of the NHL wasn’t enough to get players off the high of being with a Rivermen team that finished with a 58-19-5 season.

“Guys didn’t want to get called up when that phone rang,” laughed Emerson. “We wanted to keep rolling.”

“They (St. Louis) had an injury and I got the call-up in the middle of the year. I actually thought I played pretty well, but the Blues had a plan in place for my development and they wanted to take their time with me and keep me in Peoria for that full year.”

For some, hearing that your NHL dream will be on hold can be a disheartening, aggravating sentiment. This was not the case for Nelson. He understood the process and was better for it.

“When I look back, I know it was the best thing that could’ve happened to me,” said Emerson. “It helped me build a foundation for my career. We had a lot of fun in Peoria.”

Winning can make everything fun. In the fall of 1990, the Rivermen, by way of Head Coach Bob Plager, were about to ice a lineup that would be revered across the hockey world. Led by captain Dave Thomlinson, that Peoria team featured household names like David Bruce, Michel Mongeau, Jimmy Vesey, Kelly Chase, Dominic Lavoie, Tony Twist, Steve Tuttle, Pat Jablonski, and so many more.

“That team we had; oh my gosh; just so much talent. We had veterans. We had goal scorers. We had good goaltending and solid defense. We had tough guys. For me personally, it couldn’t have been a better group to be with for your first year as a pro. We knew right from day one that year was going to be something special. There was something special about that group.”

While the team may have felt something special from day one, their record and recent history suggested otherwise. The Rivermen failed to get past the first round of the playoffs five straight seasons, and had just come off a 31-38-13 campaign. In October 1990, they began the season 0-1 after a loss to the Kalamazoo Wings on opening night.

Peoria would follow that by evening its record at 1-1. They’d jump over the .500 mark by winning the next game, improving to 2-1. They would go on to win the next game. Then the game after that. Then another game. This carried on until the team had achieved the unthinkable; an 18 game winning streak to establish a new record across professional hockey.

“We didn’t really talk about it too much,” said Emerson upon recounting the historic streak. “We just kept on winning. Every night we always seemed to get a bounce or make a play when we needed to. Next thing you know we’re at 10, 11, 12 straight wins and we just had that feeling that we weren’t going to lose.”

Hockey is a team sport. That concept isn’t lost on Nelson Emerson, who quickly pointed to his teammates for crediting the accolades he’s accomplished. While the iconic “MTV line” featured Mongeau, Thomlinson, and Vesey, the ‘undubbed-EBC’ unit had quite a bit to offer too. Emerson, along with line mates Kelly Chase and David Bruce joined forces with the MTV line to create the strongest 1-2 punch in the IHL.

“Our line with Chaser (Kelly Chase) and (David) Bruce was so much fun,” said Emerson. “Bruce scored 64 goals that year. Anytime Chaser or myself got him the puck and he went across the blue line, we thought it had a pretty good chance of getting to the back of the net.”

Among those credited, Chase in particular meant a lot to Emerson.

“I can’t say enough good things about Chaser. He did so much for our team and me personally. If it wasn’t for him, I wouldn’t have made it to the NHL. He did everything he could for me. I swear there was 11 or 12 games in a row where Bobby (Plager) would start our line for a game and Chaser would take a fight to start all of those games. He does that, plus gets over 20 goals and 50 points. What a hockey player.”

Emerson was quite the hockey player himself. The Peoria Rivermen of ’90-91 finished with the best regular season record in the IHL. They dispatched of the Milwaukee Admirals in six games, followed by coming from behind to win a seven game series with the Phoenix Roadrunners to advance to the Turner Cup finals. There, they would climb the summit after a game six win in Fort Wayne, defeating the Komets and capturing the Turner Cup.

The Rivermen would go on to win their next championship nine years later when the Kelly Cup made its way to the city, but Emerson was long gone and a regular NHL player at that point. His next championship would come 21 years later; this time as a member of the Los Angeles Kings. The team he finished his playing career with later brought Emerson into the fold as the Kings Director of Player Development. It was then in 2012 where Emerson watched the Los Angeles Kings become kings of the NHL by winning the Stanley Cup. It was a different league. A different city. A different championship. But for Emerson, it was a familiar look.

“They’re obviously different in some ways. This is the Stanley Cup. It’s the ultimate prize and nothing compares, but what was similar were the sacrifices those players made to win. It was like every five feet of ice was contested. They fought to win every 50/50 puck battle. Everybody’s beat up, sore, and playing hurt. That’s how it was for us (in the IHL). We had to give it our all to win.”

Perhaps one of the more noteworthy wins of that dream season in Peoria came when the Rivermen tied the pro hockey record with their 15th consecutive victory. It was November 10th, 1990 inside Carver Arena against Salt Lake City. With Peoria down 3-1 in the third, the team managed to tie the game and send the contest into a shootout, where captain Dave Thomlinson would bring the fans to their feet with the game-winning goal. After the game, Head Coach Bob Plager, who recently passed away, had this to say:

And here we are, nearly 31 years later. Bobby was right.