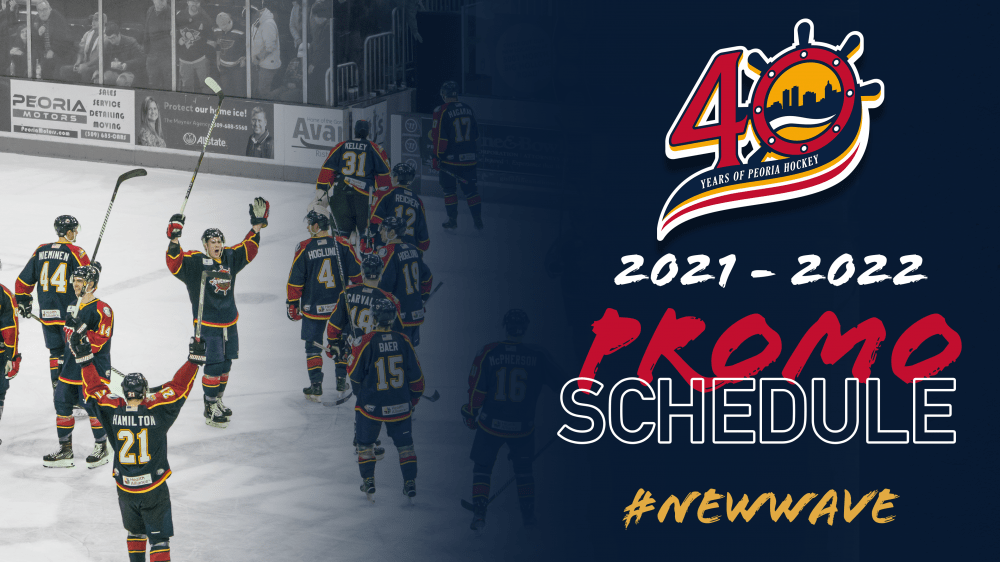 Peoria, IL – The Peoria Rivermen are proud to announce unveil their promotional calendar of the 2021-22 season, their 40th in the city of Peoria.

The upcoming season is chalk-full of promotions for all 28 home games at the Peoria Civic Center this season. It all kicks off with Bruce Saurs opening Weekend on October 22 and 23 against the Macon Mayhem. The first 1500 fans for each night will receive a free magnetic schedule, courtesy of Envision Insurance and Auto-Owners Insurance. In addition, the Rivermen will be wearing their “Stick it to Cancer” jerseys on Saturday night to be auctioned off after the game.

In November, back by popular demand, the Rivermen will be hosting PEANUTS Hockey celebration, presented by City Link. The weekend will be on November 19 and 20 and will feature PEANUTS jerseys will be worn for both nights and auctioned off at the conclusion of Saturday’s game. In addition, City Link will be hosting a food drive to benefit Stuff-A-Bus and The Friendship House.

December will feature the Rivermen’s annual Teddy Bear Toss on December 10 to benefit local charities. The final month 2021 will also feature a “Flip the Calendar Night!” on December 26. The first 2000 fans at the game will receive a Rivermen team calendar.

The giveaways continue into the new year when the Rivermen host Evansville on January 1, as the first 500 kids aged 12 and under will receive a free Rivermen youth jersey, while supplies last. The Rivermen will also be wearing a specialty Peoria Prancers jersey in honor of the first professional hockey team in the River City.

The long-awaited celebration of 40 years of Rivermen hockey will take place on January 14. The first 1,200 fans in the building will receive a limited-edition stocking cap courtesy of UnityPoint Health! The Rivermen will be wearing their 40th Anniversary jersey to be auctioned off after the game.

Peoria will close out the opening month of the year with Local #34 Night on January 21, the first 1000 fans in attendance will receive a free T-shirt courtesy of IBEW Local #34.

February will feature two main give-away nights, highlighted by Klein Design Youth Stocking Cap Night on February. The first 500 kids 12 and under in attendance will receive a free Rivermen stocking cap courtesy of Klein Design. In addition, the Rivermen have partnered with Nickelodeon to host a special kids night featuring the Rivermen wearing special jerseys for the occasion and giving away free pucks to the first 750 kids in attendance, courtesy of Preckshot Pharmacy.

On March 4, the Rivermen will be giving away 40 Year Anniversary backpacks to the first 1000 fans in attendance for their game against the Roanoke Rail Yard Dawgs, courtesy of Homefield Energy. The next night, Saturday March 5, will be our annual Chicago Blackhawks night featuring specialty “Blackhawks” jerseys worn by the Rivermen.

Finally, the Rivermen will host Fan Appreciation Night on April 8. The first 3,000 fans in attendance will receive a team photo and have an opportunity to attend an autograph session after the game. The team will be wearing specialty uniforms to commemorate the 1990-91 Turner Cup Championship squad.

All jersey dates are listed below.

“Stick it to Cancer” presented by Roco Industries – Saturday, October 23

“US Flag” presented by the U.S. Air Force – Saturday, November 6

All promotions are subject to change.