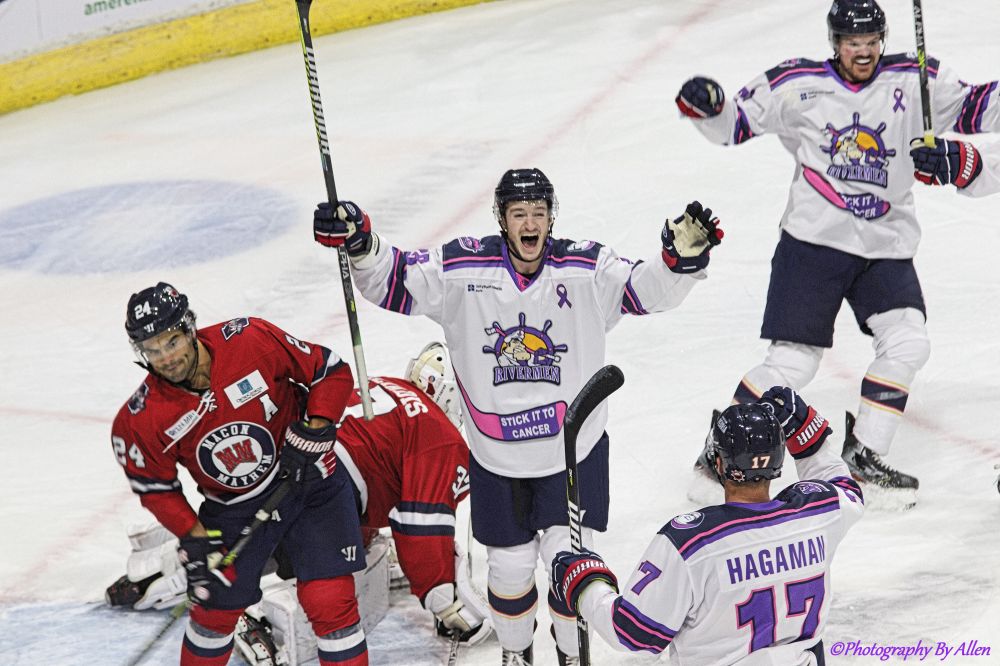 Peoria, IL – It was a much more competitive contest on Saturday night but the Rivermen, tested as they were down the stretch, were able to come away with a 3-2 victory and a weekend sweep at Carver Arena on Saturday night.

Unlike Friday’s goal-fest in the first period, Saturday saw a scoreless opening period with the Rivermen and the Mayhem exchanging scoring chances. Things heated up in the second period as both teams came up empty on back-to-back odd-man rushes in the same shift. Eventually, Peoria was able to break through on a delayed penalty call. With the extra attacker, Rivermen forward J.M. Piotrowski corralled the puck at the left half-boards. Skating to the corner, he spied defenseman Brandon Rumble sneaking in toward the right post. Piotrowski sent a quick pass across the crease to Rumble who tapped the puck into a wide-open net and scored his first goal of the season to put the Rivermen up 1-0.

But Macon fought back and scored on a broken play after another odd-man rush, less than five minutes later, to tie the game at 1-1 after the second period.

Heading into the third, the Rivermen killed off a carry-over penalty from the second and went on the attack. At the 6:22 mark of the third, rookie Mathieu Cloutier was the recipient of a pass from the left side, off the stick of Alec Hagaman. Cloutier, who had been active offensively all weekend long, made no mistake as he rifled a shot low and into the net to record his first professional goal to put Peoria up 2-1.

But just like in the second period, Macon came back with an answer in the third. Less than a minute after Cloutier’s goal, the Mayhem found the back of the net off of a turn-over and a quick pass in front that resulted in a tie game once again.  As the final period dragged on and overtime loomed, both sides needed to dig deep to find an answer. For the Rivermen, they needed to look no further than their captain.

Midway through the regulation time period Alec Hagaman found himself standing just in front and to the left of the Macon goal crease when a shot came in from the point. A pad save by Mayhem netminder Michael Stiliadis produced a rebound that came right to Hagaman who quickly swept the puck into the back of the net to record his first goal of the season and second point of the night.

Once again, the Mayhem pressed hard in search of a response but this time there was no answer. Peoria goaltender Jack Berry, making his first start as a Riverman, was outstanding, making several spectacular saves and keeping the Mayhem at bay.

With him in the net, the Rivermen played stout defensive hockey until the final horn to secure a 3-2 victory and the weekend sweep over Macon. Peoria improved to a perfect 2-0-0 record on the season to become one of just three teams in the Southern Professional Hockey League to remain undefeated. They will look to continue their winning streak on their first road trip of the season next weekend as they travel to Evansville for a one-game series with the Thunderbolts.

Notes: Peoria’s Penalty Kill was a perfect 4/4 on Saturday and remains perfect on the season. Alec Hagaman, Brandon Rumble, and Mathieu Cloutier all recorded their first goals of the season. The Rivermen have three players in the top 20 of SPHL Rookie scoring, they include Tanner Hildebrandt (4 pts), Mathieu Cloutier (2 pts), and Mike Laidley (2 pts).