Rivermen Fall 3-1 to Evansville in First Loss of Season 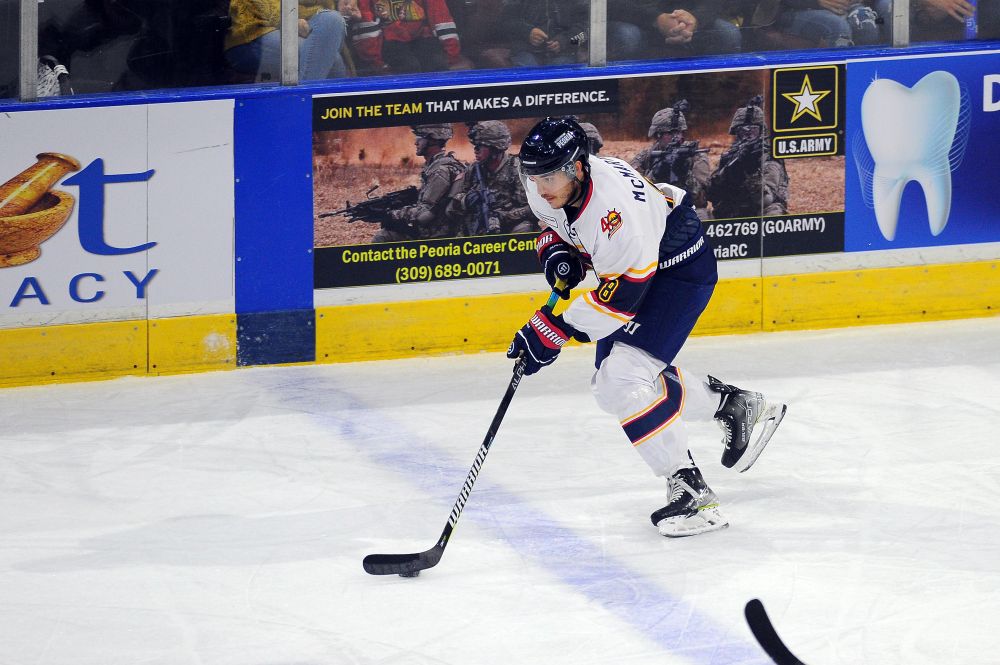 EVANSVILLE, IN – Missed opportunities ended up costing the Peoria Rivermen as they fell to the Evansville Thunderbolts by a score of 3-1 at the Ford Center on Saturday night. The loss marks the first defeat for Peoria this season, and their first on the road.

Just as they wanted, Peoria had the early edge in zone time, shots on goal, and scoring opportunities. They were aided by back-to-back five-on-three advantages that lasted over a minute. The closest they came to scoring was striking the right post off a one-timed shot from the right circle. The Rivermen laid siege to Thunderbolt netminder Brian Billett, getting pucks and bodies in front but they could not find the back of the net.

After weathering the storm, the Thunderbolts went on the counter-attack. Evansville was able to score on a broken play off of a turnover in the Peoria zone and found themselves up 1-0 through the first period. In a battle of veteran netminders, both sides made it a priority of getting the opening goal. The second period showed why.

Buoyed by the momentum of their 1-0 lead, Evansville continued the attack and was again able to find the back of the net off of a costly Rivermen turnover.

Trailing 2-0, the Rivermen were sparked by a couple of fights on the ice during the mid-stages of the second. None seemed to have more of an impact than Alec Hagaman’s bout that jumpstarted his team.

It was soon after Hagaman’s bout that the Rivermen finally broke through. Paul-Antonine Deslauriers led a two-on-one rush up the ice along the right side. Seeing that he had Mitchell McPherson with him, Deslauriers sent a hard wrist shot toward the net that Billett saved with his pad. The save produced a rebound right to McPherson whose quick shot from in close beat Billett high and secured his first goal of the season.

McPherson’s goal was a critical one as it gave Peoria life, now down only 2-1 as they entered the final period. But the Thunderbolts clamped down defensively, forcing the Rivermen to the outside and not allowing them any sustained attack in the offensive zone. An empty-net-goal with just two minutes left all but sealed the game for the Thunderbolts.

Despite the loss, spirits remain high in Peoria, the Rivermen’s resilience when down by two goals was admirable and the Thunderbolts only scored off of Rivermen turnovers. Still, the missed opportunities loomed large in this game. But it is still early and hockey is a game of inches. Peoria is just those inches away from something special.

STATS: The Rivermen were outshot 31-24 – Peoria was 0/4 on the power play, Evansville was 0/3 – Brian Billett now has five wins on the year, the most of any SPHL goaltender – Peoria remains one of just three teams in the SPHL to remain perfect on the penalty kill.